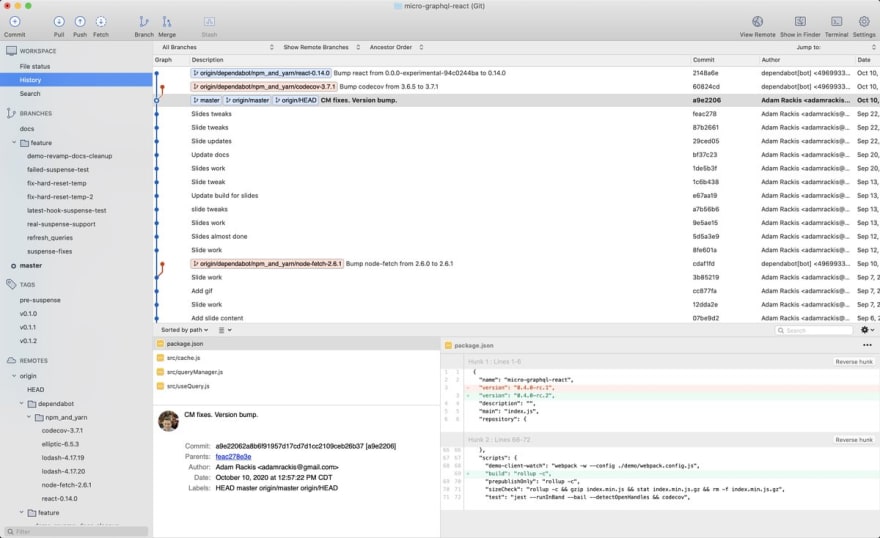 Seriously am I the only one around here using SourceTree?

Forget about the shell commands you have to memorize to use git: just being able to *see* your repo, click on a commit, view every file that was changed, with a full diff, etc.

sourcetreeapp.com twitter.com/hhariri/status…
Hadi Hariri @hhariri
Git is not a success story. Git is a failure as a system with a crap user experience that forces you to learn more about the tool you're using that about getting your work done.

It brought me back to several years ago when I just start using git every day, and I haven't understood what's the difference between rebasing and merging yet, my dear team-mate typed CLI commands like being possessed by the flash, got things done in just a few seconds. Before I could even see what happened, he cleared the screen (he got OCD on that LOL). That's the moment I started to realize GUI may not always be faster and easier than CLI.

So here, I would like to share some tips that work really well for me. The tips contain:

Cloning a remote repository to the local environment

Most of time I just copy and paste the hint given by websites to the terminal:

With Oh-my-zsh, could even make it shorter to gcl Which also includes an option to recursively clone the submodules of the repository.

But my favorite now is using the VSCode git command, so after clone, it could help me to open the project right away and start my work:

Or just use the awesome "Clone from Github" to select GitHub repository:

Checking out a specific branch

With the help of the tab key to auto-complete. The original command is:

But when it comes to other people's branches, it is not that effective. And again, the VSCode git extension saved me with a nice branch selection on the status bar:

Checking out a new branch

Checking out a new branch just need to add a -b option:

Sometimes I found my branch name has a typo or got a better idea of the name before I pushing it to the remote. Then I will do

For existing branches that have been pushed to remote before, it's a good habit to check the status of it after a while, in case someone else has pushed a new thing to the branch, or myself pushed something on my home laptop but forgot to update the work laptop to the latest version.
Here is the command:

Sometimes this is not clear enough, then I will check the git history. And the basic log could satisfy this for most of the time:

This command provides a lot of interesting options (quite complicated to remember honestly), like --stat to show simple file diffs, --graph to draw a commit graph, --oneline to show only one line for each commits... Well, adding these will become too long to type, so I prefer to use Oh-my-zsh alias:

Keeping branch up to date

If my local branch hasn't had any changes yet, and the git status notifies me there are some new commits in the remote branch like this:

To update the local branch.

If there are some new changes in the local branch, then things will be a little complicated. Well, let's discuss later in the "Resolving conflicts" section.

Finishing and committing the changes

Before I commit the changes, I love to double-check my changes in case I commit some testing code (e.g. console logs) that I forgot to remove. And the VSCode built-in git diff is really helpful here:

After verification, I may stage the files that I would like to commit at the same time: 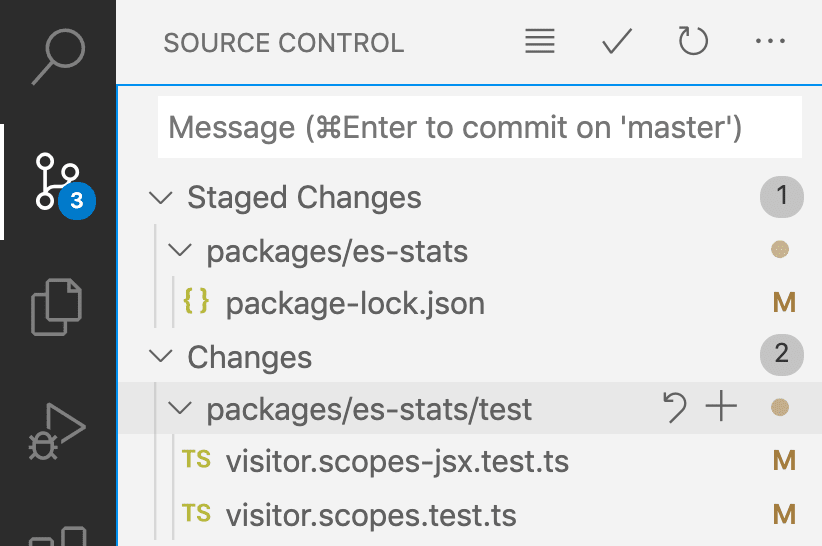 And enter a proper message in the textbox, click the "tick" button to commit.

However, this may easily fail thanks to the commit hooks(linting configured with husky) without an intuitive error message display(Actually the output is available in the "OUTPUT" console, but the format is simplified and not that readable). So I often like to commit in the terminal instead:

Or simply add all changes and commit together:

Note that the -a option will not include the newly created untracked files. So I will need to do this instead sometimes:

Like my branch naming, I may found some typo in my commit message, or missed some files in my commit. Then I will add the file changes in and do:

Push the changes to remote

If the branch is new and never set the remote upstream, it's better to:

So I could track branch status like I mentioned in "Keeping branch up to date" section. And next time I will not need to assign the upstream name anymore, just do:

Rebase is my first choice

rebase is always my first choice of few commits differences. So it will help to make sure my changes are newer than the latest source branch.

To rebase my upstream branch, can use git pull:

Or more often, rebase on the main branch like this:

Adding upstream name there will ensure git to fetch remote updates first and then do the rebase, making sure rebasing on the latest commit.

Squashing commits before rebasing or merging

Sometimes I made many commits during the development but they are too small to be kept in the main branch, or I changed one part of code back and forth to improve it. And these small commits cause me quite some trouble to rebase the main branch. In this scenario, I may consider squash the commits before resolving conflicts.

If all the commits are mine and I just want to simply squash all commits into 1, I will:

If it requires to keep the commit messages and authors. Then use the interactive mode:

Merging for a complicated situation

If I am trying to make a shared base branch up to date, rebasing will cause all the child branches to get significant conflicts. If I am working on a big change, and there are many small commits for better version controlling, rebasing may cause many times of conflict resolving which could be super confusing until I got lost in the conflicts. And now it's better to use merge instead.

To merge my upstream branch, can use git pull:

Or more often, merge the main branch like this:

I used to love the conflict resolver in Webstorm a lot, but sadly Webstorm always eats up my CPU and memory. So I gave it up one day and never come back. Well, I have to say, it was really really good that I took quite some time to get used to the new flow with VSCode.

When there's a conflict, refreshing the "SOURCE CONTROL" panel, and will see the conflict files under "Merge changes":

Select and open the conflict file, and I have to make a choice Current Change or Incoming Change. Well, at least it looks not that confusing as ours and theirs.

The comparison is unlike the Webstorm's side-by-side but an up-and-down style, which only works well when the conflict block of code is not that large.

Well, here I just stick on this tool as I don't want to introduce any new tools for not that much happen case.

When something is broken or looks weird, the meaningful git message and the long git history finally appears to be a big help. And GitLens is super helpful here. 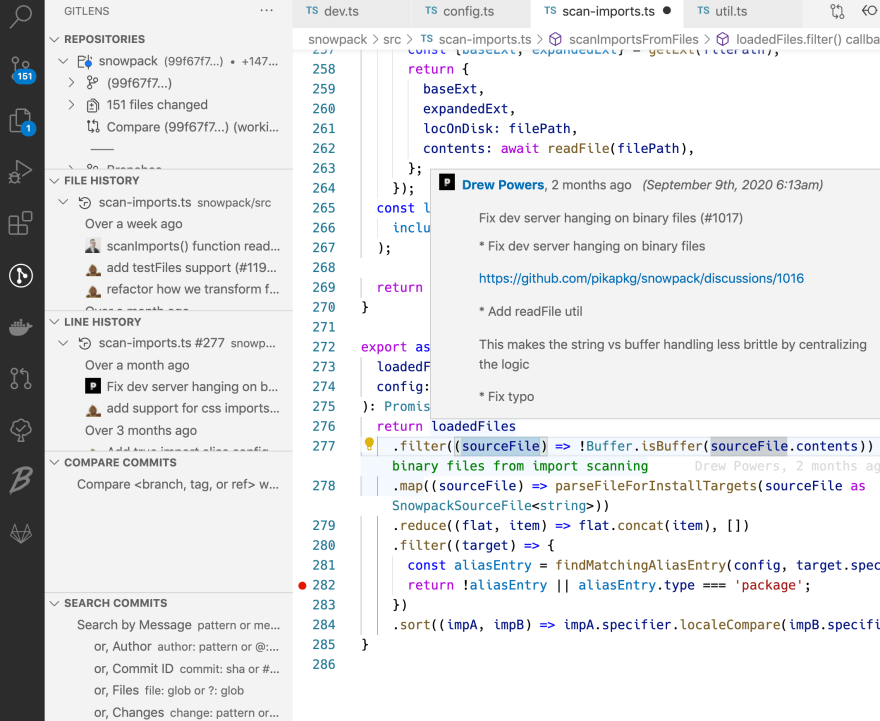 Despite it provides so many functions, I almost only use LINE HISTORY and FILE HISTORY to help me understand how things get here step by step, like this:

If I have ever checkout any remote branches that have been merged later, those references will not go away in my local. Usually, it is fine but in the large codebase it could mess up the git commands to prevent me from committing. So I do regular clean up now by:

By contrast, clearing in local is not that simple. I did clear manually for quite some time in this way:

Then I found the shortcut in Oh-my-zsh to remove all the branches that have been merged to master/develop/dev:

Please do repeat yourself (DRY is dead)

Once suspended, jennieji will not be able to comment or publish posts until their suspension is removed.

Once unsuspended, jennieji will be able to comment and publish posts again.

Once unpublished, all posts by jennieji will become hidden and only accessible to themselves.

If jennieji is not suspended, they can still re-publish their posts from their dashboard.

Once unpublished, this post will become invisible to the public and only accessible to Jennie.

Thanks for keeping DEV Community 👩‍💻👨‍💻 safe. Here is what you can do to flag jennieji:

Unflagging jennieji will restore default visibility to their posts.