In part 1 of this series I described on how I could help my team members raising self-awareness by building a habit of continuous feedback. This part will focus on how I tried to take action on my duties of understanding every person’s concerns and motivations and help them define the direction of their growth.
I started by doing some research on coaching models and processes and found out about the GROW model.

The GROW model, published in 1992 by John Whitmore in his book “Coaching for Performance”, is a simple but powerful framework that helps maximise and maintain personal achievement and productivity, through a sequence of phases and conversations. GROW stands for (G)oals, (R)eality, (O)ptions and (W)ay forward, which are the four pillars of this framework. 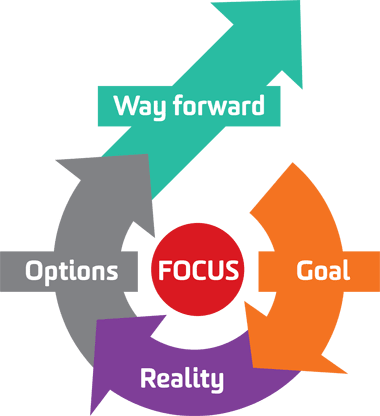 The first phase focuses on raising awareness on the person’s aspirations and broad goals, after which comes a reflection on his current reality and what steps are or have been taken towards those aspirations. In the third stage, a brainstorm is undertaken with the purpose of discovering approaches and ideas on how to effectively work towards the person’s goals. Finally, the last phase concentrates on materialising these ideas into concrete and effective actions.

Using this model as a basis, I undertook a series of 1:1 sessions with my team members, where I experimented to initiate discussions around the GROW topics. After a few sessions, I compiled a list of questions that address these topics and began using them as starting points for discussions and as funnelling mechanisms. This allowed me to get much more value and content from these meetings.
These meetings became the first part of the process I started using, I called them Introspection Sessions

In these sessions, the Goals and Reality phases were addressed. Here are some examples of the questions I used:

I found the best duration for these sessions was between 20 and 60 minutes. It allowed enough time to develop and dive deep into some subjects, without becoming too wearying.
Throughout these sessions, it is important to take notes and capture as much as possible. However, I realised I had to do so without deviating attention from the person and retain an engaging posture. One thing that helped was to regularly read the notes with the person, to ensure everything was captured and to summarise parts of the discussion.

In the next part of this series, I will continue to explain how I took the outputs of these sessions to create meaningful personal development paths and visions.

Trending on DEV
🤑🥳😎Going down the youtube tech guru hole or how you can spot scam artists
#beginners #javascript #webdev #career
What's on Your Personal Development Plan?
#discuss #career
This Book Is Every Solution To Your Programming Career
#books #career
Why you should get a good, international domain for yourself
#career #advice
How to Have a Good Code Review Mindset, Tips for New Developers
#beginners #career #productivity
The 25 most recommended startup books of all time
#startup #books #beginners #career
This is how I evaluate my potential employer (it works 99%)
#career #motivation #productivity
I got my first job! (As a Junior Front End Developer)
#beginners #career