As software developers, we use a lot of tools. Many of them come with an intuitive User Interface which abstracts the internal complexity of the domain they are operating on. This allows us to go fast and learn those tools by using them.

For better or worse, git is not one of those tools. The abstraction git's User Interface gives you is very leaky so to become better with git you must spend (some) time learning how it works internally.

In this Understanding Git series, we will cover git’s internals (we will not go into git’s source code don’t worry) and the first thing on that list is git’s heart and soul — the data model.

It's all about .git

Git tells us it has created a .git directory in our project’s directory so let’s take a quick peek into it:

Some of these files and directories may sound familiar (particularly HEAD) but for now, focus on the .git/objects directory. Right now it's empty, but we will change that in a moment.

and a README.md file

Now let’s stage and commit them:

OK, nothing special here, adding and committing — we’ve all “been there, done that”.

If we look back at the .git directory we can see that the .git/objects directory now contains some files and subdirectories (bear in mind they will have different names on your computer!):

Every object in git has a so-called checksum header (the unique identifier of an object) and the first two characters of that checksum are used as a directory name while the rest is used as a file (object) name. Let's look at what these objects are.

The first kind of object that git creates when we commit some file(s) are blob objects. Git uses them to represent the content of files. In our case there is two of them, one for each file we committed:

The next kind of object git creates are tree objects. They are used to represent the project's folder structure and in our simple example, git needs only one tree object. It contains a list of all files in our project with pointers to their blob objects:

Lastly, git creates a commit object. It contains some metadata data (author, time..) and a pointer to its tree object: 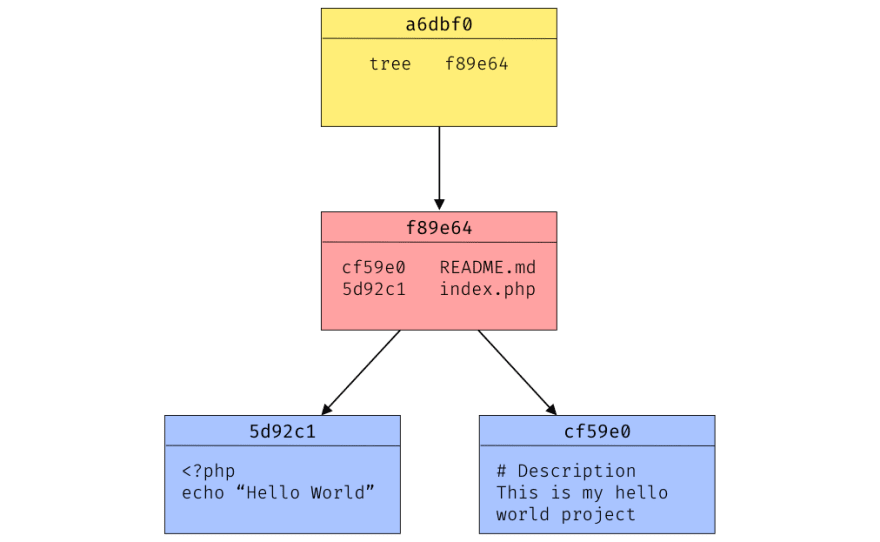 Content of our .git/objects directory it should make more sense now:

Using git log we can see our commit history:

By knowing the naming convention we mentioned earlier we can locate this commit object in .git/object :

To display its content we can’t simply use the cat command since these are not plain text files but git has a cat-file command we can use instead:

Now we see the content of the commit object:

First line is the pointer to a tree object and to examine it’s content we can use git ls-tree command:

As expected it does contain a list of our files with pointers to blob objects:

Sure enough, it has the same content as our index.php file:

There you go. Now you know what happens when committing files.

Let's see what happens if we now edit (add some code magic) and commit our index.php file: 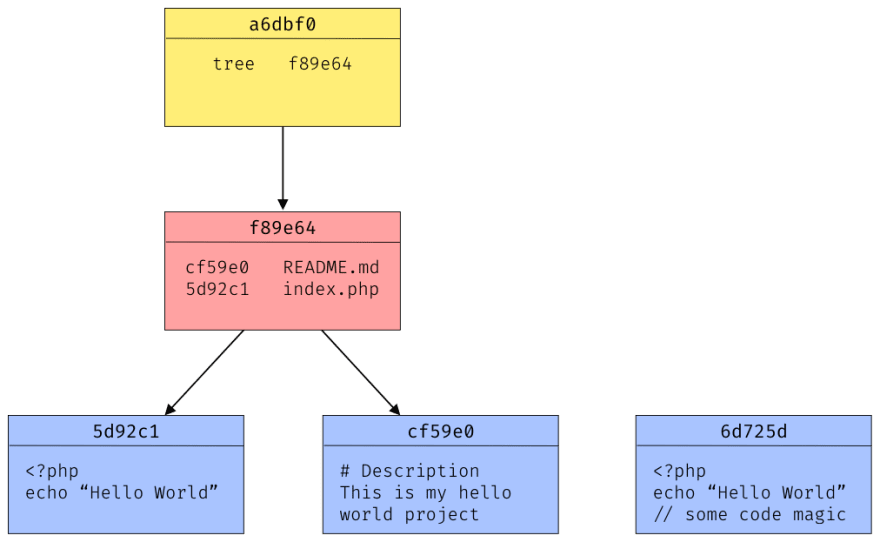 Git creates another blob object (a new snapshot) to represent the new content of index.php. As for README.md, since it didn't change, git can reuse the existing blog for it (we'll see it in a moment).

When creating the tree **object, git updates the pointer for  index.php  to its new blob while the README.md pointer stays the same: 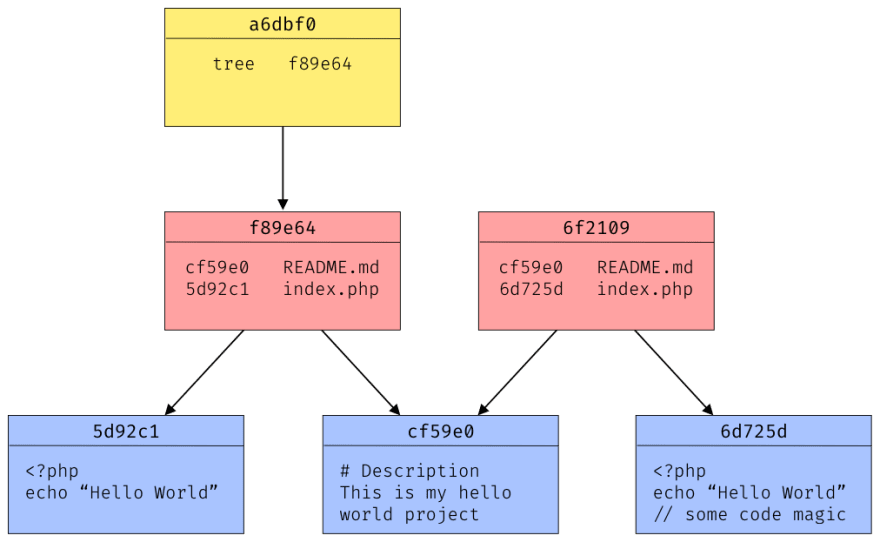 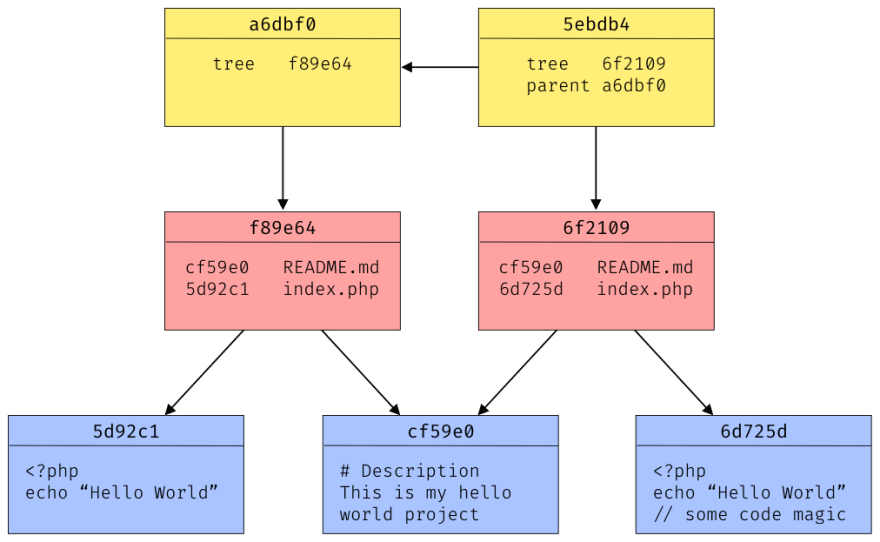 Now that we know how git handles file adding and editing, the only thing remaining is file deletion. What if we delete our index.php file? 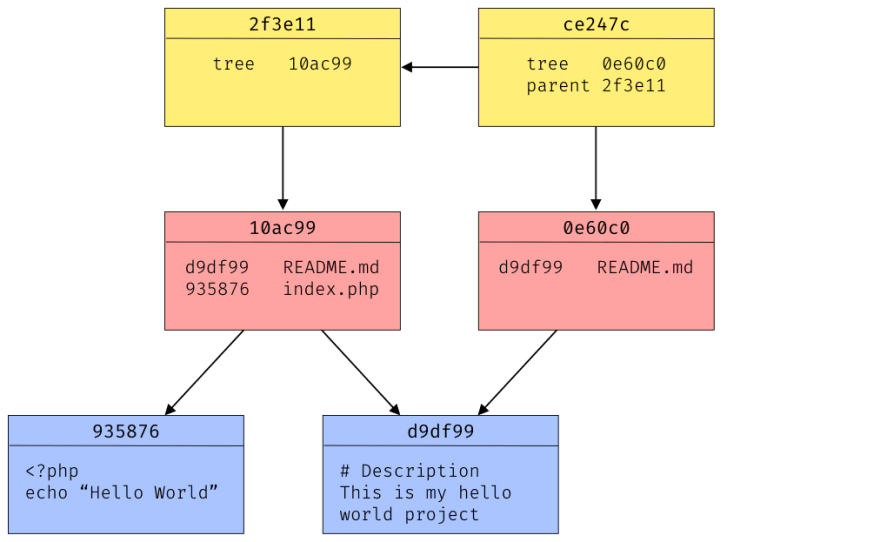 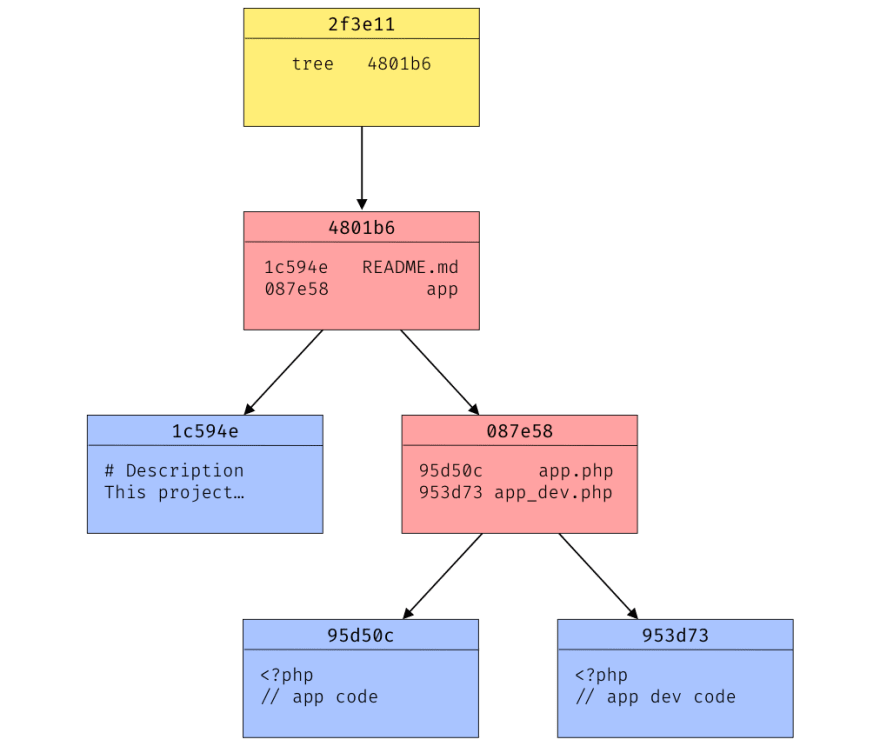 Here, our project base folder has one README.md file and one sub-directory app which has two files ( app.php and app_dev.php).

In the next post, we'll take a look at branching - what branches are and why having a bunch of them is very cheap in git.

How to Pull from a Remote Repository

The Practical Guide to Contributing to Open Source Projects