Visual Studio Code lets you access almost every feature it provides by a command that is accessible via the command palette or via a shortcut on your keyboard.

You are probably working 8 hours every workday and hopefully for you the most time of these working hours you can code. So you are spending much time staring at your code editor of choice.

Knowing some shortcuts can help you to get your work done faster. Knowing how to find the file you need faster. Running your NPM command, you need right now, instead of opening an external Terminal.

The makers of Visual Studio Code

You can download these cheat sheets, print them, and put them on your desk for a quick reference or try to learn them while your commuting to work. Don't try to learn them all at once. This takes time. So be patient, and you master them all.

Are you a Vim user? Maybe the Emacs shortcuts are tattoed into your brain? Alternatively, for whatever reason, you used notepad++ and appreciated the keyboard shortcuts from notepad++😵?

Visual Studio has an extension for all of you! Let's install the ⚛Atom Keymap. We will do this without the help of our beloved mouse (almost).

2) Once Visual Studio Code is open press: CTRL+SHIFT+X. That shortcut opens the Extension list, and your cursor focuses the search bar. Type the following @category:keymaps. (If you want to know more about how extensions work in how this section works leave a comment down below!)

3) You see now a list of keymaps. Press Tab and then the Down Arrow ⬇.

4) Press ⬇ until you have selected the Atom Keymap. Now press Enter.

5) Sadly I can not find a method for selecting the Install button. You now need to click🖱!

You can find a Keymap for almost every editor you can imagine. Install the one you like the most, and you have your shortcuts! Cool right?

There are to ways to view the Keyboard Shortcut Settings. One of them is through a graphical interface or can also choose to use to edit the shortcuts through a JSON file.

We can open the Graphical interface by pressing CTRL+k and then by still holding CTRL you should press CTRL+s. 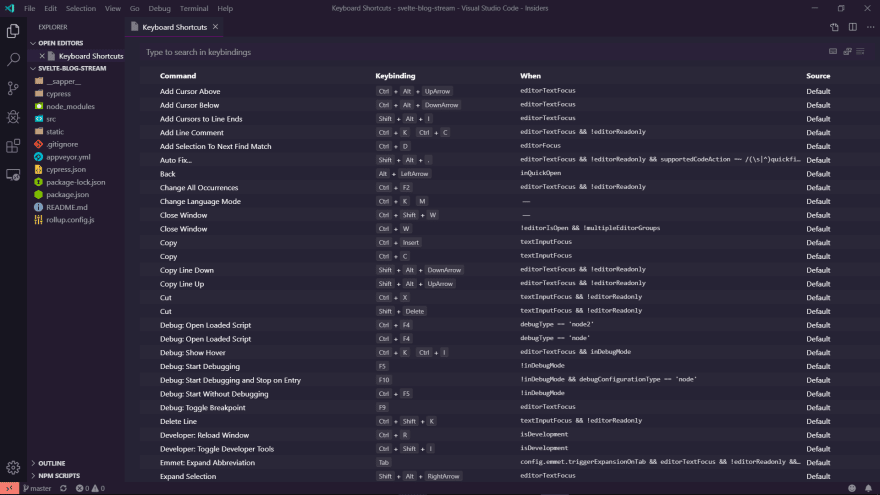 On the top, you have a search bar where you can search for either the command or the keyboard shortcut you want to check out. These dialouges tend to look the same in Visual Studio Code and you will start to see them alot.

You can see four columns. Let's go through them.

To change the keybinding, you double click the row and a modal pops up. Then you press the key combination you want and hit Enter.

Now that we know how it key bindings work in general let's have a look at at the keybindings.json file.

To add a shortcut in the JSON file you simply just need to add an object like the following one:

You need to specify the key and the command. The when tells Visual Studio Code where it should run this command. If you leave it empty, it will listen everywhere for it. We talked about this in the last part.

You know this one already, but maybe you skipped to this part 😉

Opening and closing the sidebar

Sometimes you want to have more horizontal space, and the sidebar is in your way! Just press

You can toggle the sidebar on and off

You are like what Zen Mod in Visual Studio code? Yes, its build-in!
For that, you need to press:

This will toggle Zen Mod on and off.

One of my favourite features is the integrated terminal in Visual Studio Code. I'm using it 99% of the time! So to quickly open or close it, you need to press:

This will open the integrated terminal and focus the cursor in it. If you press it again, it will close, and your cursor goes back to where it was.

Search for a file in your project

Visual Studio Code has a great file search build-in. It is also super fast when you use the remote Extension. To open it you simply press:

This opens a dialogue where you can see your recent open files that alone is very nice. It also supports fuzzy search. This means you can type any word, and it looks in the hole path of the file. So you don't have to be exact! That dialogue also supports a lot more things. Like go-to line or debugging and a lot more features! If you would like to know more comment down below.

Switch to a recent open workspace

You work in a microservice architecture and need to switch folders all the time? Because you don't use a mono repo? I have the shortcut for you! Press:

This opens a dialogue with a list of recent open workspaces/folders.
Bonus tip: If you hit CTRL+ENTER in that dialogue Visual Studio Code opens it in a new window.

People love vim because it is easy to split views among the editor. Visual Studio Code has that also build in. Just press

To create 2 columns or

To create a new row. The second one sounds harder then it is, but once it is in your brain it takes you ms, and you know how to change or create new shortcuts now 😉

Now that you know how to split the editor window, you also need to learn how to jump around these views quickly. This is pretty easy and also has a default key binding. You need to press

This means that you need to press CTRL plus the number of the window you want to focus on. For the first one press CTRL+1 and the second window CTRL+2, you get the idea Easy right?

Now you opened too many editor windows, and you want to close them. This is quickly done by pressing

This closes the currently opened window.

Close only the saved editor windows

Sometimes you have so many editors open that you don't know anymore what is saved whatnot. Yeah, I know you can see this with that dot in the tab bar, but still, it is too much for you to focus and find the right files. Visual Studio Code has your back! Just press

This saves all windows so you can check the unsaved windows and save them.

You need a new file to sketch some code? Alternatively, you need to create a new file for your pet project? Press

This opens a new editor.

Change the language of your current file

You want to switch the selected language in your current file because you want Javascript (react) and not Javascript? Press

This opens a new dialogue where you can search for the language you desire.

Let's now focus a little bit how to make editing easier. You have an error in line 1042(If your file is that long that alone is the problem). You don't want to scroll! Press

This opens a dialogue, and you need to input the line number you want to jump to. This, combined with CTRL+p can be very powerful.

Your first question is, what is a Symbol? In programming languages, symbols are usually variables. In CSS, they are selectors. To see the dialogue press

This opens a dialogue with a list of available symbols in the current file.

You see a dialogue with just a # in it, and you need to type the symbol you want, and Visual Studio Code searches in the hole workspace for that symbol if this is supported by the language you are using. So you need to check that on your own.

Moving a line up or down.

Sometimes you need to move out that line that you had inside your if or just move a line because it's called to early. You can do that by pressing

To move the current selected line one line down

To move the currently selected line one line up

You want to fill that array with some variables, but you are too lazy to write a loop. So how do you get array[0] array[1] and array[2] populated? By copying the first line twice and just changing what you need. For that press

Visual Studio Code has build-in suggestions. Most of the time it pop-ups automatically for you but sometimes it won't, and you really need it. Easy, press

This opens the suggestion dialogue

Sometimes you need to isolate code and comment out everything around it. Press

If you multiple lines selected it comments them out. If you don't have anything selected, it comments out that one line only.

To comment out that code block, you need to select more than one line. This is done by pressing

To start selecting from the current line and moving the cursor up.

To start selecting from the current line and moving the cursor down.

Fold and unfold your code

You have this big function, but you really can not see it anymore because it is too big and need refactoring, but you don't have the time, so you want to forget about it? You can fold and unfold code so that out of 100 lines you can make 1 line. To do that press

For this one, you can not have any code selected. Press

This cuts the entire line when nothing is selected.

People usually know how to Indent code. You do it by selecting the code you want to indent and press

Press Tab as many times as you wish so that it looks good to you.
Did you know that you can Outdent? Moving your code from right to left? You do that by pressing

There are way more shortcuts. These shortcuts are the one I use the most often. I hope this helps you to understand more how shortcuts in Visual Studio Code and that you can now create your own one.

Have I overlooked a useful command that everybody needs to know?
Did you miss something? Was something not clear?
Please write a comment. I answer all of your questions as best as I can!

Once suspended, lampewebdev will not be able to comment or publish posts until their suspension is removed.

Once unsuspended, lampewebdev will be able to comment and publish posts again.

Once unpublished, all posts by lampewebdev will become hidden and only accessible to themselves.

If lampewebdev is not suspended, they can still re-publish their posts from their dashboard.