I'm sitting in the airport at 10pm, exhausted. The past two days at Deconstruct Conf have been a wild combination of amazing, frustrating, and inspiring. As a developer, I'm inspired, as an event organizer, I'm inspired, but as a woman I'm exhausted.

Deconstruct is a technology-agnostic conference beautifully crafted and curated by Gary Bernhardt whom I've never met but seems like a truly lovely person. The concept is that the conference is single track, has no sponsors and a hand selected lineup of speakers with strong track records of high-impact and influential talks. It's a gem in a conference landscape that often feels crowded with pitch-men and recruiters. It was a conference designed by a technologist for technologists who are excited and curious about technology.

The speaker line up was inspiring, and even surprising. As a vocal advocate, I frequently talk about my frustration with the lack of white men willing to talk about race and gender issues or inclusivity but Justin Searls and Michael Bernstein both brushed up against this topic in their talks.

Seeing Suz Hinton and David Nolen speak was truly transformative for me.

Still, despite the somewhat elevated selection of speakers, the lack of women and people of color at the audience was blinding. The absurdity of the situation spiraled quickly after the first talk when 300+ men got up to pee. My gender isn't usually an advantage in these situations. 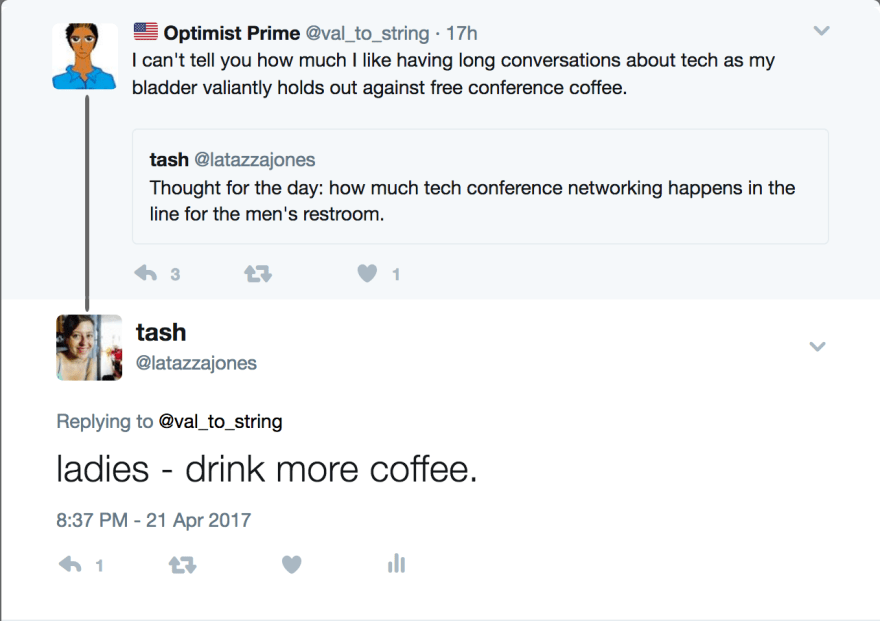 Restrooms have never been so telling. The first time I ducked into the ladies, it became overwhelmingly clear that every other woman in the restroom was a part of Ada Academy's 6th and 7th cohort because very affordable tickets were offered to Ada Academy which is great! I get very excited about women learning to code. 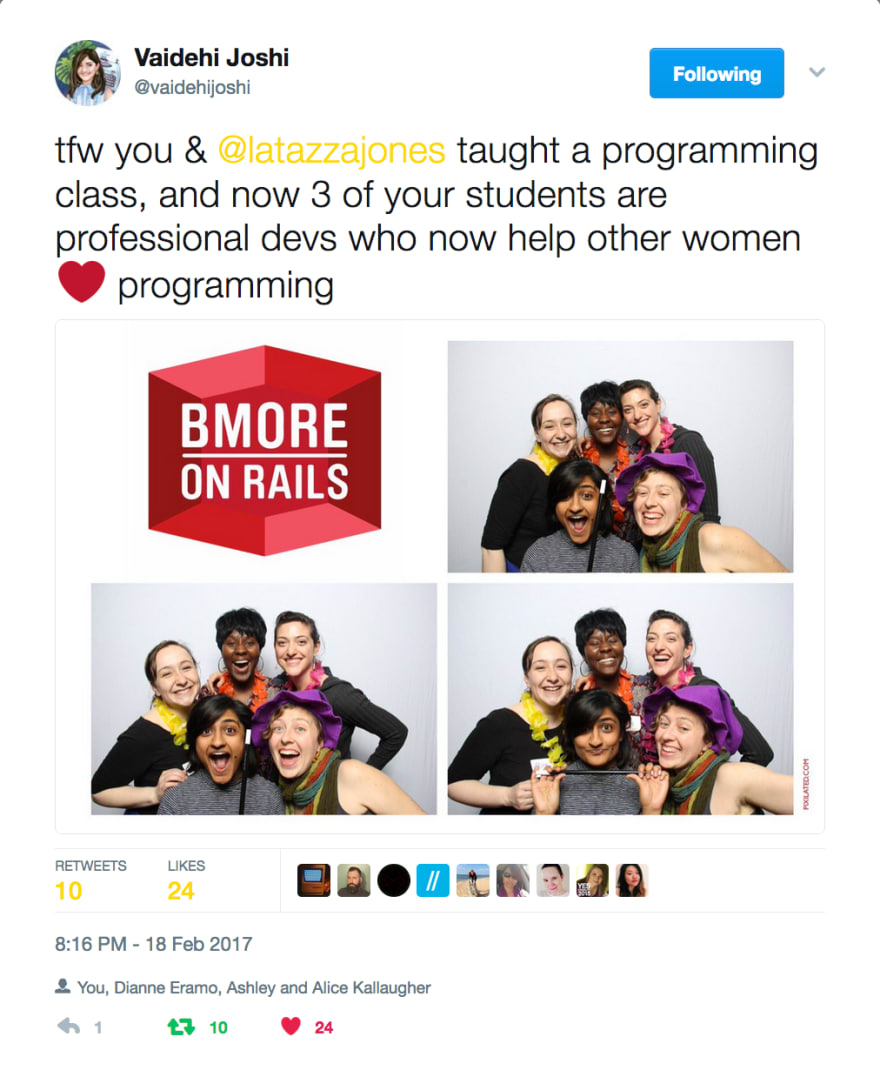 But - I spent the entire conference feeling very uncomfortable since person after person assumed I was a bootcamp student.

I want to be clear here - there were other women who had been working in development, but they were few and far between. So few, that I frequently felt out of place.

The speaker I'd been anticipating most was Jenn Schiffer. Usually I'm laughing at my computer with my very comforting headphones on when watching her talk. My partner is amazing and he's always telling me you can't worry what others think of you. Despite his voice in my head -- my laugh felt so loud since looking around, my colleague and I were the only women for rows and rows.

JENN SCHIFFER IS BRILLIANT AND HILARIOUS her humor is unapologetically gendered and very expressive of a woman's experience. I thought long and hard about giving a standing ovation but the previously mentioned exhaustion had already kicked in and was fed further by my ballooning insecurity. I regret that I remained seated.

The thing that I'm still working to understand is how exclusivity played out for Deconstruct. On one hand, my impression is that most of the audience learned about the conference via word of mouth and personal networks which resulted in a pretty monolithic crowd. On the other hand, that crowd was self-selecting, and from what I can tell it was full of thoughtful, growth-minded developers. I've been harassed, dismissed, and typecast in the tech community for years, but overall I felt relatively safe at Deconstruct. But feeling safe and feeling included and comfortable are not the same thing.

What Gary is doing is fantastic - there are rough edges and really big questions that need to be asked, and this post is not intended to be a criticism. These problems are systemic. My hope is that next year we might be able to hack the system a bit.

Next year, I'd love to see some of the amazing women of color in our industry added to the stage.

Also - I challenge every one of this years attendees to encourage someone who doesn't look like them to attend next year. The line up is there - it's solid and a great start at being inclusive but as a community we have work to do.

Functional testing: why it's so important and where to start?