In the past month alone, here are some of the things I've experienced:

Quick Tip for being inclusive to women in tech: if you're teaching HTML/CSS, please do not use a woman without makeup as HTML and a woman with makeup as CSS. Because styling is required for almost any app, it implies that makeup is *required.* Thx for coming to my Ted Talk.

An actual response I got from a man who was trying to empathize, but first questioning my experience. 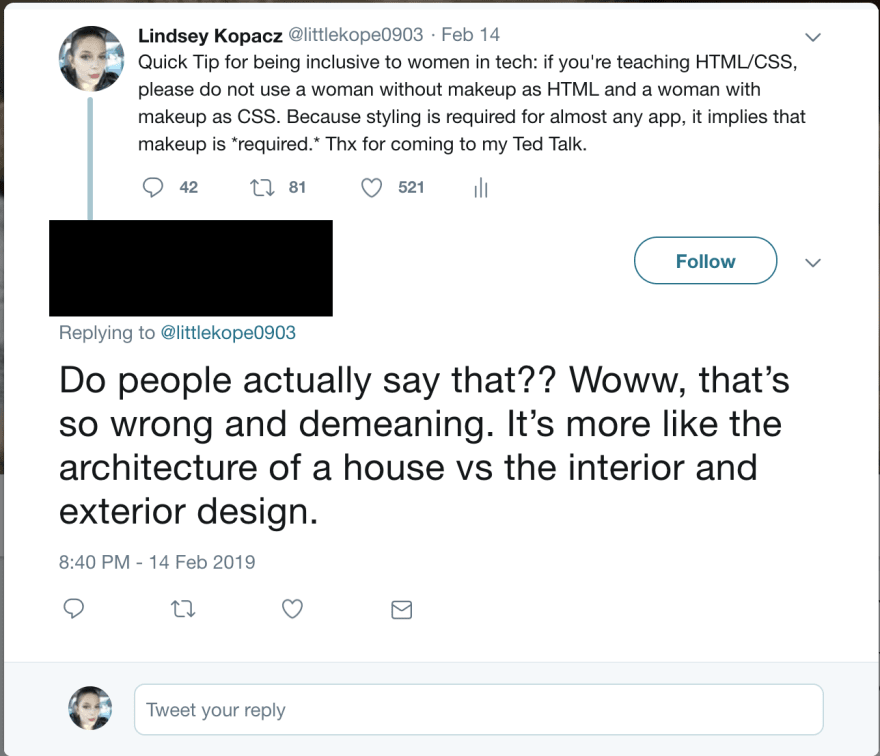 Just yesterday I was told that my experience as a woman in tech happens to both men and women. Y’all need to stop minimizing experiences for your own damn ego.https://t.co/VjWvA4LWOI

To which I got this response and I immediately blocked. 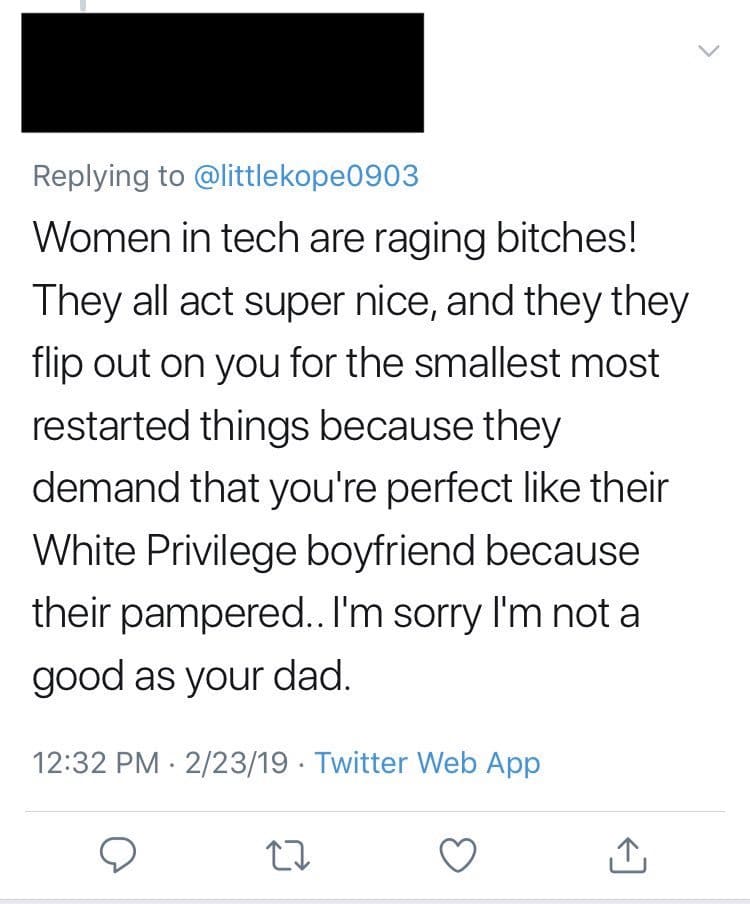 I definitely appreciate having a day dedicated to celebrating women, but I feel like a lot of it gets to be "Rah Rah Women, let's support them" without any of the real experiences that many of us face every single day.

The amount of men who assumed a badass front end woman who knows JS and began mansplaining what ‘this’ is.... is not shocking but also super angering. https://t.co/r1TBVDlxza

Of course there was a man who brings in the typical "why you gotta make it about gender" thing: 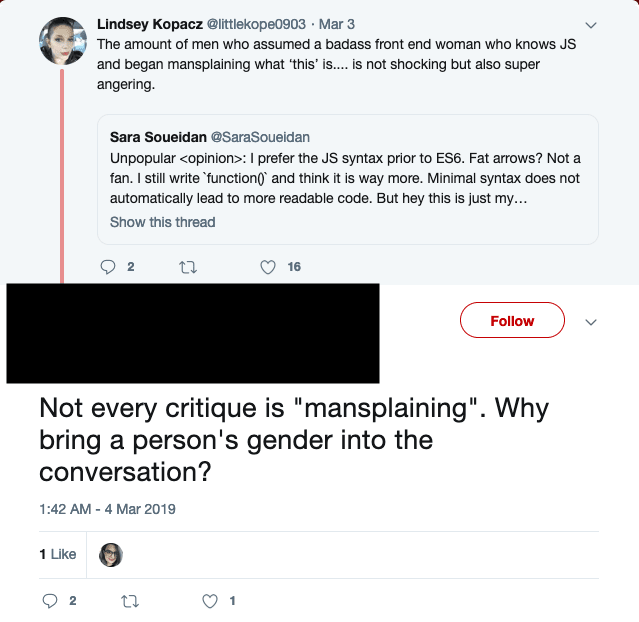 We have coping mechanisms. A lot of times I use humor to cope. For example, to the whole "why bring gender into the conversation" I quote tweeted the above tweet (you can't see it because I blocked him): 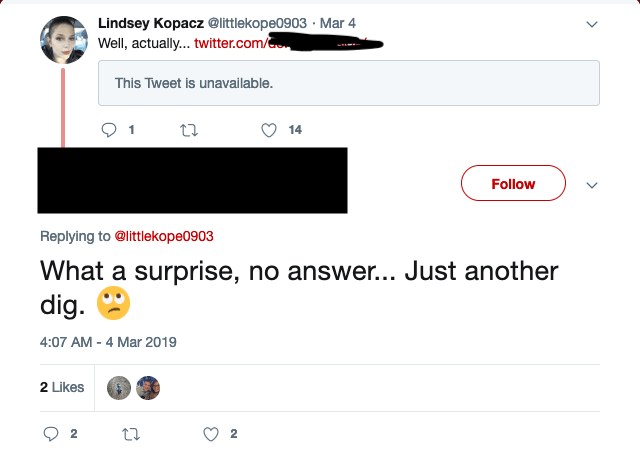 I had to block this guy because he had no right to my time: 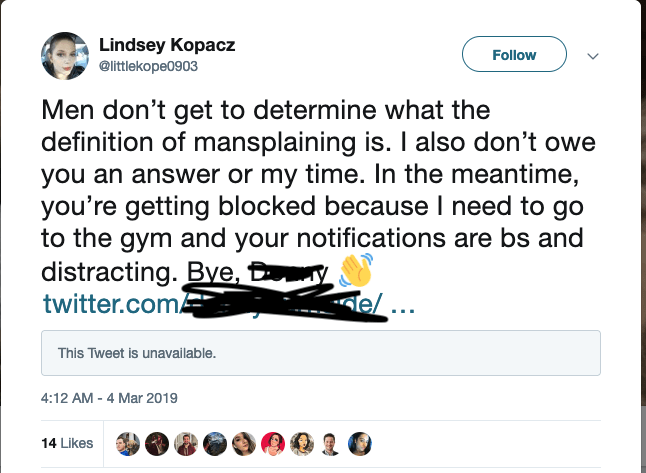 The response to his tweet about me ignoring him was particularly false and offensive. 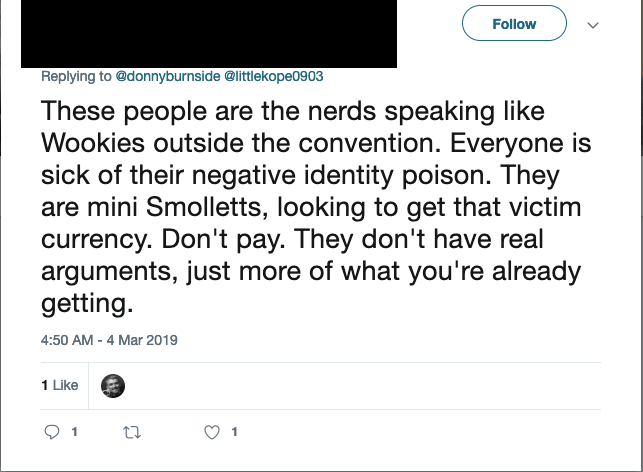 We block, mute, ignore, so please don't even bother giving me or any woman that suggestion as if it's that easy. Words hurt and sometimes defaulting to ignoring the behavior allows the offender to continue their toxic behavior. They probably will not change, but they know they can't get away with it for me. Any time the women in tech put ourselves out there, we are putting ourselves at risk. Especially the brave women who stand up to toxic masculinity.

I thankfully have more people who support me than don't, but I really wish people would realize how much their words matter, even the ones who mean well.

I deserve credit for...

I hope to see my work/developer/tech community...

Actually, care about women, invest in inclusion efforts instead of just tokenizing them and asking them to speak at your event. Have a CoC for their conferences, Slack groups, and events.

What is a PoC and how can it increase your productivity

Connecting fonts to the site

Lindsey Kopacz
I'm a self-taught Front End & JS Dev and professional learner with accessibility expertise. I'm passionate about breaking down concepts into relatable concepts, making it more approachable.
Recommend me webdev softwares and packages I need to try
#programming #discuss #javascript #webdev
Should I search for a job, and then move? Or move and then search?
#discuss #anonymous #career
Which Frontend Framework Would You Use For an Ecommerce Storefront?
#discuss #javascript #webdev #opensource