This post first appeared on my blog at www.mikenikles.com.

This is a follow-up post to Sapper, Google Cloud Run, Continuous Deployment - A boilerplate template.

In this second part, we are going to optimize how static assets are hosted and delivered to the browser. The final architecture for this post is going to be like this: 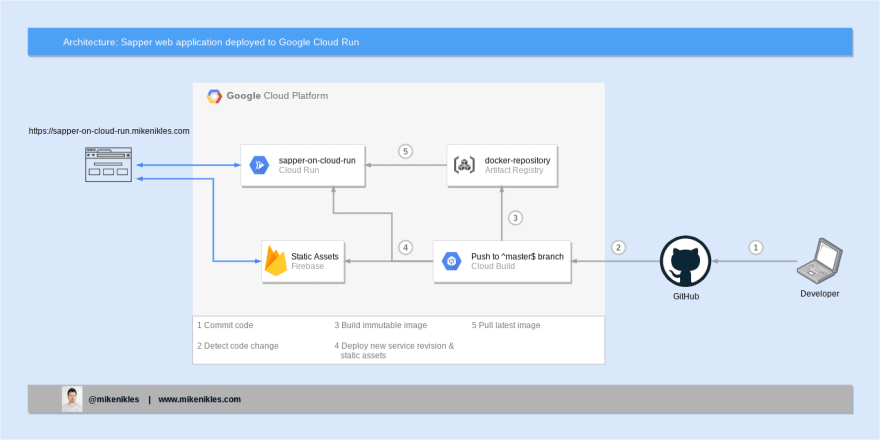 What you are about to read is an exact copy of a few chapters of my upcoming book called Cloud Native Web Development. If you are interested in this kind of content, please follow me on Twitter @mikenikles or at https://gumroad.com/mikenikles.

What is the challenge here?

In the previous post, the Sapper application's static directory is hosted within the Docker image. When a user visits the web application and requests the /favicon.ico file for example, that request goes to Cloud Run and the server responds with the icon.

The Cloud Run service we created in the previous post is hosted in the us-central1 region. When a user from South Korea visits the web application, her request travels all the way across the Pacific Ocean, half way through the United States until it reaches the Cloud Run service. The response then travels back the same way - that's a lot of traveling... While a lot of that journey happens on Google Cloud's global fiber network, it still adds latency. Check out this interactive explorer of what I'm talking about.

No problem, deploy the service in Korea

Not a bad idea, it certainly solves the latency for Koreans. It's not a globally scalable solution though as we would have to continuously deploy to new regions as and when they become available.

With a CDN, we can distribute the static assets to many locations around the world with minimal effort. The best part: We don't have to deal with the complexity of all that as we will see in a minute.

To stick to the cloud provider choice we made in the previous post, we are going to use Firebase and it's Firebase Hosting solution.

As these instructions may change, please follow the first two steps of the documentation:

Anything discussed going forward assumes you read the previous blog post and have a repository set up accordingly.

To interact with the Firebase web application you created in the previous chapter, we use the Firebase command line interface (CLI).

To keep the Firebase scripts and configuration files out of the main Sapper web app directory, let's create a firebase folder at the root of the project. We also need a package.json file where we can add NPM scripts to deal with Firebase:

Let's also generate a package.json file within that directory. This allows us to write reusable NPM scripts and simplify the process later.

Separating the Firebase project files into their own directory keeps the code clean and maintainable. It does come with one drawback which we can easily mitigate. The challenge is that the firebase-tools dependency doesn't get automatically installed when the Sapper app dependencies are installed.

We can do this with a postinstall script in the root's package.json file. This is automatically executed by NPM after the npm install command completes.

Note: You can use post* and pre* scripts for any defined NPM script, including your own custom scripts.

Before we can initialize the Firebase project, we need to authenticate. To simplify that for other team members, let's add the following NPM script to firebase/package.json:

If you use a cloud-based development environment such as Gitpod.io, you can use the --no-localhost argument, as in firebase login --no-localhost. Then follow the instructions on the screen when you run the firebase:login script.

Let's log in. Run npm run firebase:login in your terminal and follow the instructions. Once completed, you are now successfully logged in to Firebase and we can initialize the project.

To initialize the Firebase app, run the following command:

There's no need to create a NPM script similarly to how we did that for the login command. We only run the init command once.

The init command provides an interactive interface to configure the Firebase CLI. When you're asked which Firebase CLI features you want to set up, select the following:

Press Enter to confirm your selection.

Select Use an existing project for the next question, then choose the project we created in the Firebase web console earlier and confirm with Enter. If you're new to Firebase, you only see one option.

Keep all default values and say "N" when you're asked whether to configure as a single-page app.

With that, the one-time initialization of the Firebase SDK is complete.

In its essence, deploying to Firebase Hosting is a single command: firebase deploy.

Open the package.json (the one in the firebase directory) and add the following script:

We can test this by running npm run deploy in the firebase directory.

When completed, the command displays a Hosting URL. Open this in your browser to see a placeholder page. This URL is where the web application will appear once we finish the automated deployment pipeline!

To ensure the static content is copied every time we deploy to Firebase, we can leverage a feature of Firebase Hosting called predeploy scripts. Open firebase/firebase.json and add the following to the hosting section:

Lastly, we need to direct hosting requests to the containerized app that runs on Cloud Run. To achieve that, we again open firebase/firebase.json and extend the hosting section:

An extra 41 lines of code, including some NPM scripts for convenience, we managed to improve the end user experience for a Sapper application hosted on Cloud Run quite a bit. All static assets are now served through a CDN provided by Firebase Hosting. With that, these assets are distributed to edge locations around the world and served to end users with minimal latency.

To compare, here are the WebPageTest results without Firebase Hosting (i.e. what we developed in the previous blog post): 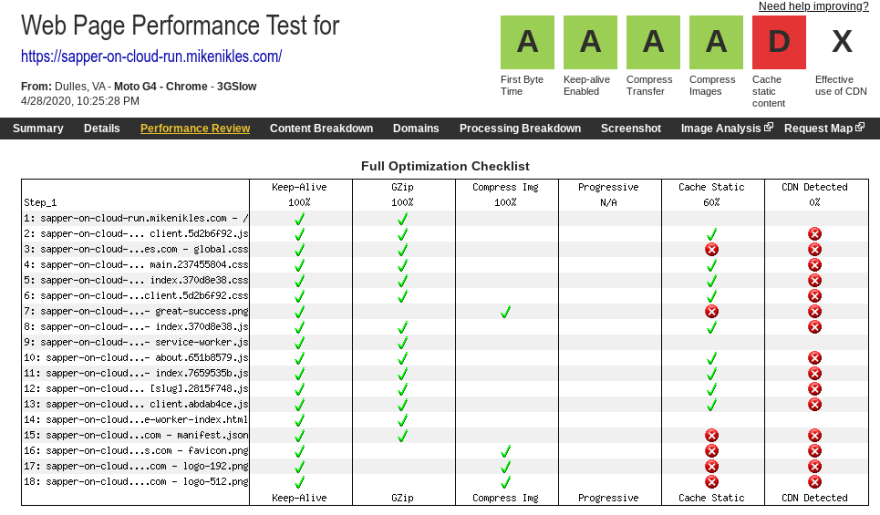 And here the WebPageTest results with Firebase Hosting (i.e. what we developed in this blog post): 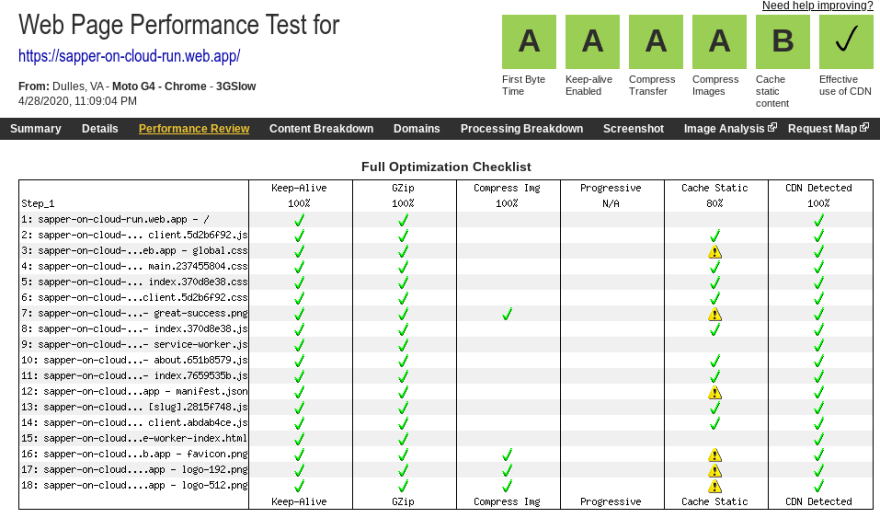 If you want to learn how to develop modern, cloud-native web applications end-to-end, please sign up for updates at https://gumroad.com/mikenikles or follow me on Twitter @mikenikles. I am currently writing a book with detailed instructions.

FullStack JWT Authentication and Authorization System with Django and SvelteKit