This post first appeared on my blog at www.mikenikles.com.

For a while now I have used Sapper / Svelte for my evening and weekend projects and deployed these web applications to Google Cloud Platform.

A boilerplate repository is available at https://github.com/mikenikles/sapper-on-cloud-run. It contains the default Sapper template, scripts to set up Google Cloud Platform, a Dockerfile and a cloudbuild.yaml file you can adjust for your needs.

To get started, click the Use this template button:

What you will learn

The assumption in this post is that you use the Sapper template as documented on the website and started your project with the following commands:

To start with, let's discuss SSR vs SSG.

SSR vs SSG with Sapper

There are two main options for the deployment:

In this scenario, you use two commands provided by Sapper to run a backend server:

At a high-level, the first command outputs artifacts to __sapper__/build whereas the second command starts a simple Node.js server located at __sapper__/build/index.js. Static assets are served from the root's static directory, for example images and other assets you provide.

You can deploy the code to a virtual machine or serverless platform, start the server and the website is up and running.

When visitors load your web application for the first time, the server generates the entire page and sends the rendered HTML, JS and CSS to the browser. Subsequent navigation happens client-side. The user experience is better than with frameworks that send an empty <div> element and load the content at runtime as Sapper does not send any runtime framework to the client. It also allows search engines to crawl the website, so SEO (search engine optimization) is provided by default.

You need to manage a server. Whether that is a virtual machine or a serverless offering such as Cloud Run, it is a piece of your architecture that needs to be taken care of.

You may have heard of JAMstack, which stands for JavaScript, APIs, Markup. It's quite a buzzword nowdays. In this scenario, you use a single command provided by Sapper to export a static version of your web application:

There is quite a bit going on as part of this command, so let's break it down:

You can deploy the content of __sapper__/export to any hosting platform and serve your static web application.

No server is required anymore! All you have is a directory of assets you can deploy, including to CDN (content delivery network) systems to make your web application available in close proximity to a global audience.

This is what the web used to be in the 90s. A bunch of websites that linked to other web pages with an <a> tag. When you click a link, the next page is fetched, fully pre-rendered and ready for the browser to display it. A drawback in the 90s was that for each page load, the entire HTML, CSS, JavaScript had to be downloaded and rendered again.

Sapper has a solution called prefetching. Create your anchor tags like this <a rel="prefetch"> and Sapper will prefetch the link's URL when the user moves their mouse over the link, even before they click. By the time they do click, Sapper already fetched the content of the upcoming page and instantly displays it.

If you want to make a change to the web application, you need to regenerate it and redeploy. If you have 30,000 pages, that will take some time and is likely not feasible. The solution: Incremental builds. If you add a new page or update an existing one, only that page should be exported and deployed. At the time of this writing, incremental builds do not exist in Sapper.

The other consideration is dynamic content, such as when users need to be authenticated. In this case, it is not possible to generate pages for each user and we need a solution that provides SSR.

Let's see how we can use the SSR approach, but make sure we have minimal work to do with the server that runs the Sapper application.

The overall architecture we are going to create looks like this: 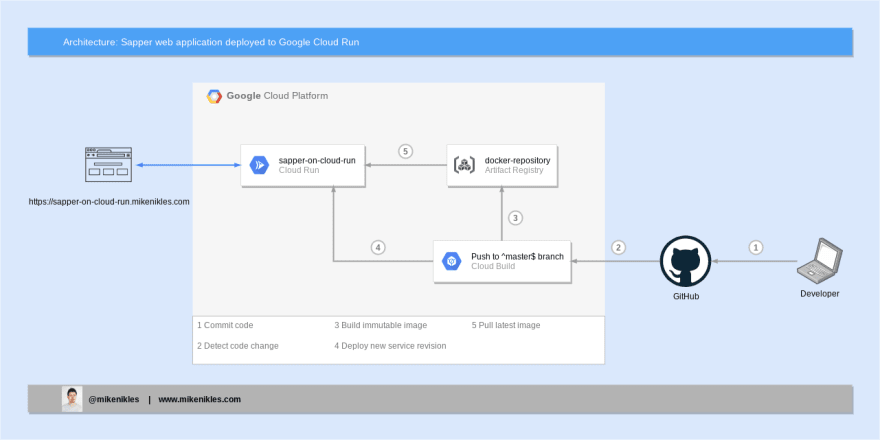 Continuous Deployment of a Sapper web application to Cloud Run

The diagram shows two aspects; one being the end user on the left who visits a Sapper SSR web application. The other being a developer on the right who makes a code change, opens a pull request and gets that merged into the master branch.

The first step is to create a Dockerfile. The aim is to keep the final size of the Docker image as small and as lean as possible.

In the next stage, we install the runtime dependencies. In the Dockerfile, copy the following content below what you copied earlier:

All we need for this stage is the package*.json files. Then we use the npm ci command to install production dependencies.

The third and final stage in the Dockerfile is where we create the runtime image.

Add the following to the end of the Dockerfile:

Let's review this in detail too:

To wrap up, we need to add two more lines at the bottom of the Dockerfile:

Sapper runs listens on port 3000 once the Docker image is used to spin up a container, so we expose that port.

Lastly, we define how to start the Sapper application.

If you were to build an image based on the instructions in the Dockerfile now, you would end up with a final image size of 47.1MB. In the COPY . . at the top of the file, we copy the entire content and all sub-directories. We can avoid that with a .dockerignore file:

Let me explain my approach. The first line ignores everything. Then I selectively define what not (!) to ignore. It sounds a bit complex, but hear me out. The alternative would be to ignore what is not needed in the Docker image. The .dockerignore file would look something like this:

As the project grows and more team members join, someone at some point inevitably will add files or new directories. With the second approach, these new files and directories would need to be added to the .dockerignore file. What are the chances this will happen ;-)?!

With the the .dockerignore file in place, the final docker image size is 46.9MB. A small difference, but it will forever include only exactly what the Sapper application needs and never accidentally any unnecessary files or directories.

Alright, we have a Dockerfile in place, which is a key milestone in getting the Sapper web application deployed to Cloud Run.

We have two steps left:

To achieve this, we will flip the steps and start with developing the continuous deployment process, which will then deploy to Cloud Run.

We need a place to store the Docker image. This is referred to as a registry and the likely most well known one is Docker Hub at https://hub.docker.com. Given we want to deploy to Cloud Run on Google Cloud Platform (GCP), it makes sense to use services that are in close proximity to each other. We have two options at the moment:

Let's use Artifact Registry as its website states "The next generation of Container Registry". We need to create a repository first:

Next, we are going to use Cloud Build, it is a service provided by Google Cloud Platform. Alternatives exist with Jenkins, GitHub Actions, GitLab Pipelines, CircleCI, etc.

Let's start with a new cloudbuild.yaml configuration file. In the file, we are going to define a set of steps Cloud Build will execute:

We define a name of a builder, this can be any Docker image. In this case, we use a builder that has docker installed. The args are the same arguments you would pass to the docker command locally. The tag (-t) argument defines the Artifact Registry repository we created earlier, plus the name of the image and a tag, in our case $COMMIT_SHA. This variable is provided by Cloud Build at runtime and makes sure images are identifiable with their corresponding git commit SHA.

With the docker image built, we need to push it to the registry:

Lastly, we can tell Cloud Run that the image is available and a new revision of the service can be deployed:

Before we submit this file and deploy the first version of the web application, we need to set up Cloud Build and Cloud Run.

We want the deployment to happen automatically for each code change on the master branch in GitHub. The following commands enable the Cloud Build API and configure the trigger:

To make this integration work, you also have to configure the Cloud Build GitHub app.

Set up Cloud Run and grant permissions to Cloud Build

Finally, we have to allow Cloud Build to deploy the web application to Cloud Run:

Every time a new revision of the web application is deployed to Cloud Run, a new URL is created. You can configure traffic splitting to do canary releases etc. In a production environment, you need a custom domain mapped and this can be done with a single command:

Note: This command only works once you verified the domain. Details on how to verify a domain can be found in the documentation.

Once all files are committed and pushed to the master branch, Cloud Build takes the latest code, builds a Docker image, pushes it to the Artifact Registry and instructs Cloud Run to deploy a new revision with the latest image.

There is a lot more to this architecture, such as traffic splitting, rollbacks, etc we may look at in a later post.

If you want to learn how to develop modern, cloud-native web applications end-to-end, please sign up for updates at https://gumroad.com/mikenikles or follow me on Twitter @mikenikles. I am currently writing a book with detailed instructions.