I began researching mocking tools and found one that seemed quick enough for my needs.

Mockoon[https://mockoon.com/] was a nice little gui based tool that I had heard of before and without giving it much thought, I started implementing my little mockingbird.

The good part about Mockoon:

*Its fairly simple to start with. Anybody who has used Postman will find this to be intuitive and easy to understand.
*You can have multiple apis running in parallel on your chosen ports
the ability to define multiple responses based on what is the incoming payload
*https support out of the box, if you need it
*Very very good templating support (e.g. generating unique ids for fields)
*Latency Simulation (this was the number 1 requirement I had)
*latency simulation on a per endpoint basis as well (this is cumulative over base path latency)

*It is a localhost only application (so no intranet exposure, at least I wasn't able to get that to work)
*No commandline or gui-less invocation, so would not work on no-desktop environments without major tinkering (one way could be x11 forwarding, perhaps)

Some Screenshots from my experiment 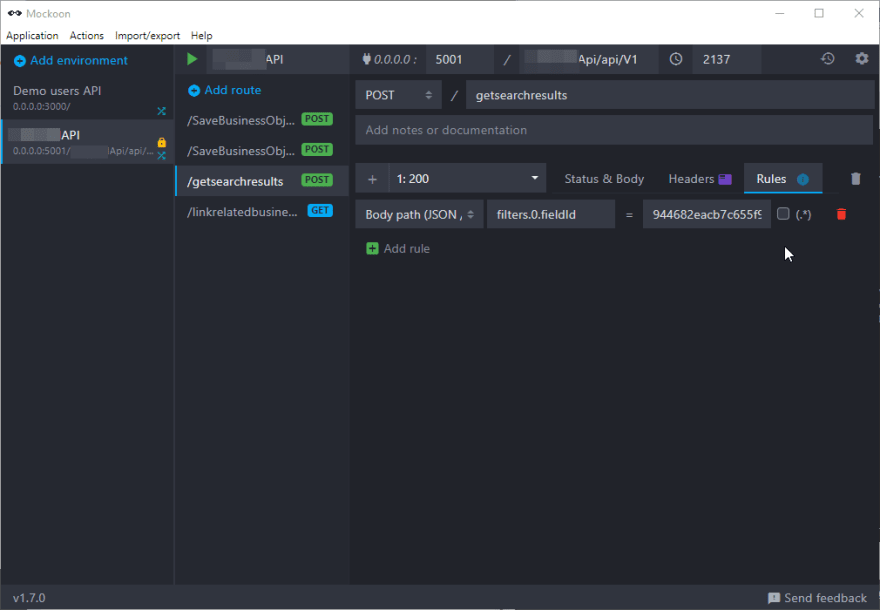 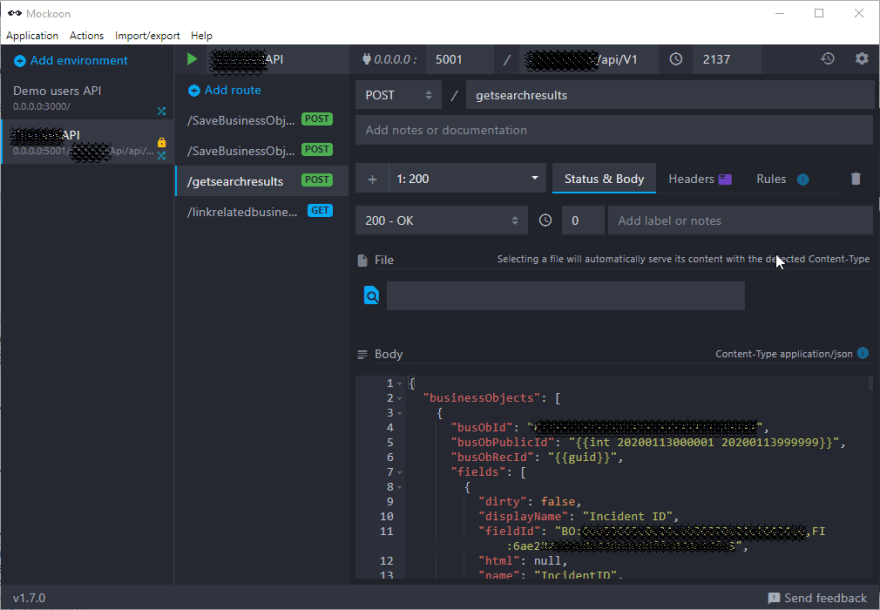 I could simulate every API endpoint I wanted to mock and it worked flawlessly for me, except for the intranet part. Might be interesting for Devs who want to mock complex API behavior.

So I had to think of something else.

Having worked on Python for a while, and had always wanted to write an API using it. I had researched a bit on flask back in the day but had never quite got around to using it. This was my chance.

And it turned out to be quite easy.

It is pretty boilerplate stuff except for a few things:

*In order to introduce some latency in the responses, I used time.sleep() before sending the response
*Used the inbuilt support for json to manipulate json objects.
*Used uuid to generate a couple of different types of guids (learnt about the library too along the way!)

The instance I used to host this was a AWS t2.micro instance with 1 vCPU and 1 GB of RAM.

It was exposed on the standard 5000 port that flask uses and I decided not to use https since that would have increased setup time on the many instances of the producing microservice.

In order to expose it to the internal network, I used 0.0.0.0 as the address which means that the program will listen to all binded IPs for the machine.

There is good support for debugging in flask as well and that requires us to set the debug flag while starting the service/application.

The command I used to start the application was a fairly straightforward one:

The application worked wonderfully for our purposes. It was giving the correct responses with the desired latency and it looked like it was absorbing all the load as well. A couple of load tests went well with parameters showing to be on expected lines.

In the next post, I'll recount/explain how i killed the mockingbird (and what I did to fix it)

SPVM 0.9662 is released - The Project for Python/NumPy Porting to Perl

mikotian
not your usual QA guy
To kill a MockingBird...
#python #coroutine #gevent
To need a MockingBird
#mock #perftesting

Once suspended, mikotian will not be able to comment or publish posts until their suspension is removed.

Once unsuspended, mikotian will be able to comment and publish posts again.

Once unpublished, all posts by mikotian will become hidden and only accessible to themselves.

If mikotian is not suspended, they can still re-publish their posts from their dashboard.

Once unpublished, this post will become invisible to the public and only accessible to mikotian.

Thanks for keeping DEV Community 👩‍💻👨‍💻 safe. Here is what you can do to flag mikotian:

Unflagging mikotian will restore default visibility to their posts.