This overdue post comes at the request from a few people on Twitter after I tweeted out a picture of my office/desk setup at time of this posting. 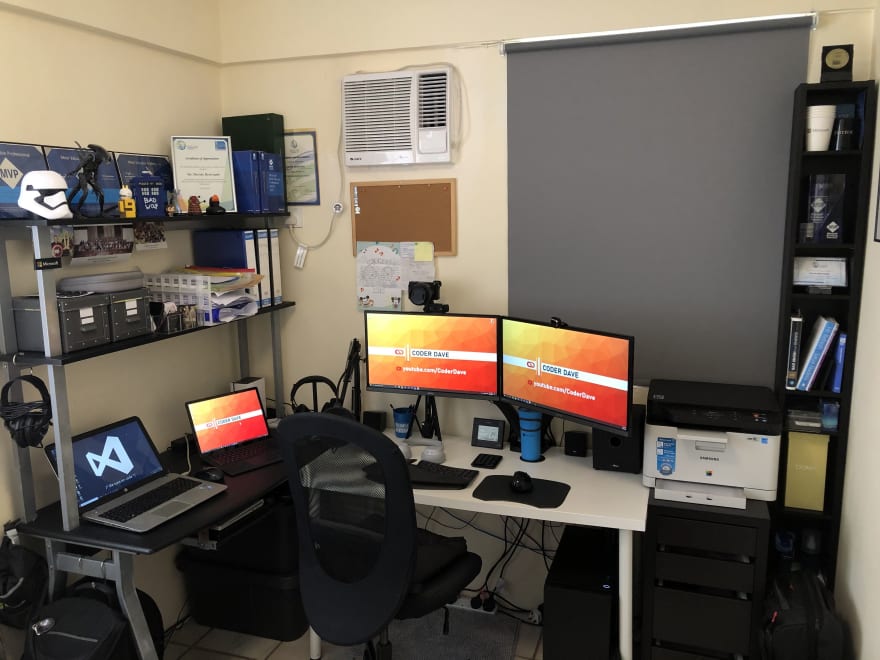 This post will break down what I'm currently using in my home office, where I do all my work when not on an airplane.

After years of going only with Laptops (see the Laptops section below), I've recently decided to switch back to desktop PC. And so I did build my own workstation.

And wow it is fast! 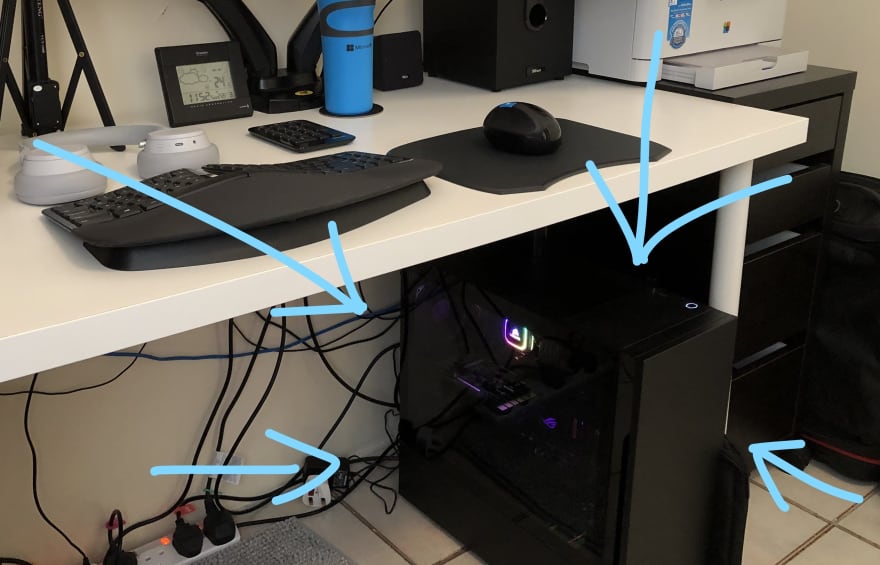 These are the specs:

I published a video on my YouTube channel when building it.

You can take a look at it here:

As you can see, I'm using a dual-monitor setup. 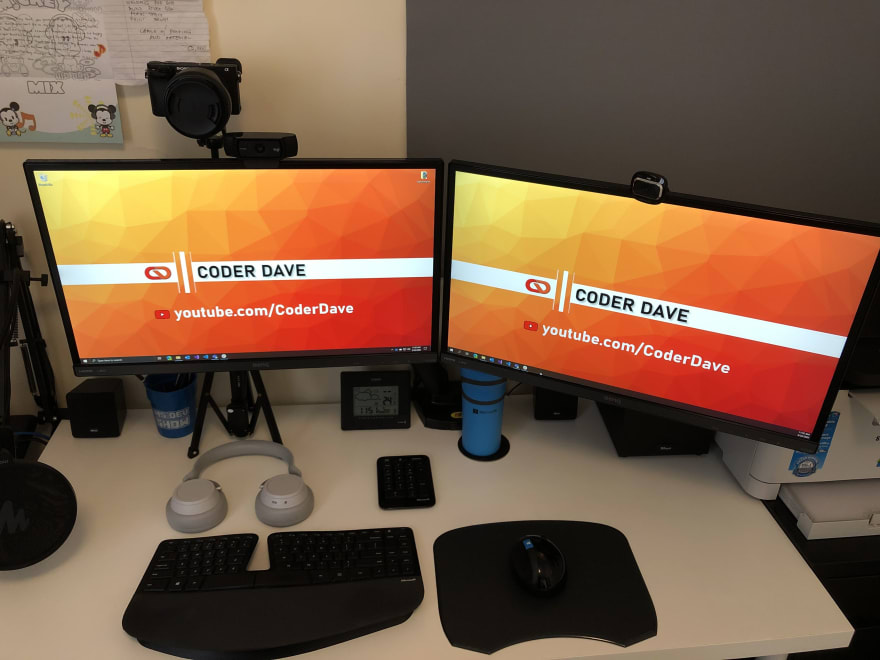 I think they are fantastic monitors at their price range. Not sure I would use it for gaming, but for office-work, coding and video editing they are great.

I've been using these pieces for more than a year now, and I feel pretty good about them.

As visible in the photos, I have the Microsoft Skulpt Ergonomic kit.
If you are not familiar with ergonomic keyboards it will take a while for you to get used to it's layout, even though it is not as extreme as other ones. However, after I got used to it, I started feeling less tired after long hours at the computer.

Same thing for the mouse, it is not the most precise or the most beautiful, but it does it's job nicely.

One thing to notice here is that the keyboard is a real battery eater. I have to remove the batteries every time I stop working on the computer for the day because if not the day after I need to put in new batteries... Not sure it's just mine or all of them are the same.

I have a multi-webcam setup.

My main webcam, which I use for most of my conf-calls and for some quick'n'dirty video recording, is the Logitech C920, which is a 1080p cam.

It is a quite good webcam (you can find many reviews online) but unfortunately it has some autofocus problems in some conditions (again, a lot of reviews about this as well).

On my right monitor, I have a second webcam for some more side views. It is a Microsoft LifeCam HD 3000, and even tho its resolution is only 720p I have to say that the image quality is pretty nice.

Since I'm making a lot of YouTube videos (check out my channel CoderDave) I wanted to have the clearest image possible, without the need of selling some organs to pay for the camera.

I wanted the option of using an external mic with my camera (I use a Lav mic in some videos). I also wanted a camera that doesn't have a time limit on video recording (most DSLR and Mirrorless have some limitation) and that of course could record in 4k. 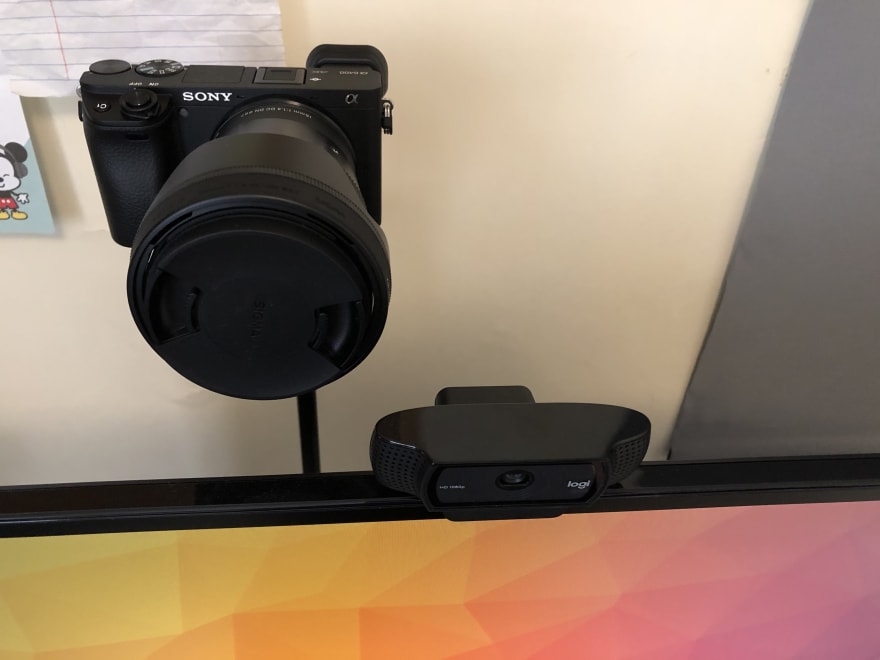 I decided to get the Sony A6400 after watching hundreds of YouTube videos and reviews.I found a very good deal (Cameras and photo accessories are quite cheap here in Hong Kong), so I went with the body + kit lense option (with the 16mm-50mm lense).

I also got a Sigma 16mm f/1.4 since it's a highly recommended lens and it does incredible in low light. With the low aperture, I'm also able to get a pretty amazing depth of field, which also means my background is less distracting and viewers are more likely to focus on what I'm saying. This lense is just amazing, only downside is that it is fairly big and heavy (you can see it in the picture above).

Nothing too pro here, I have a Maono A425 Plus. It is a decent Cardioid Condenser USB Microphone. 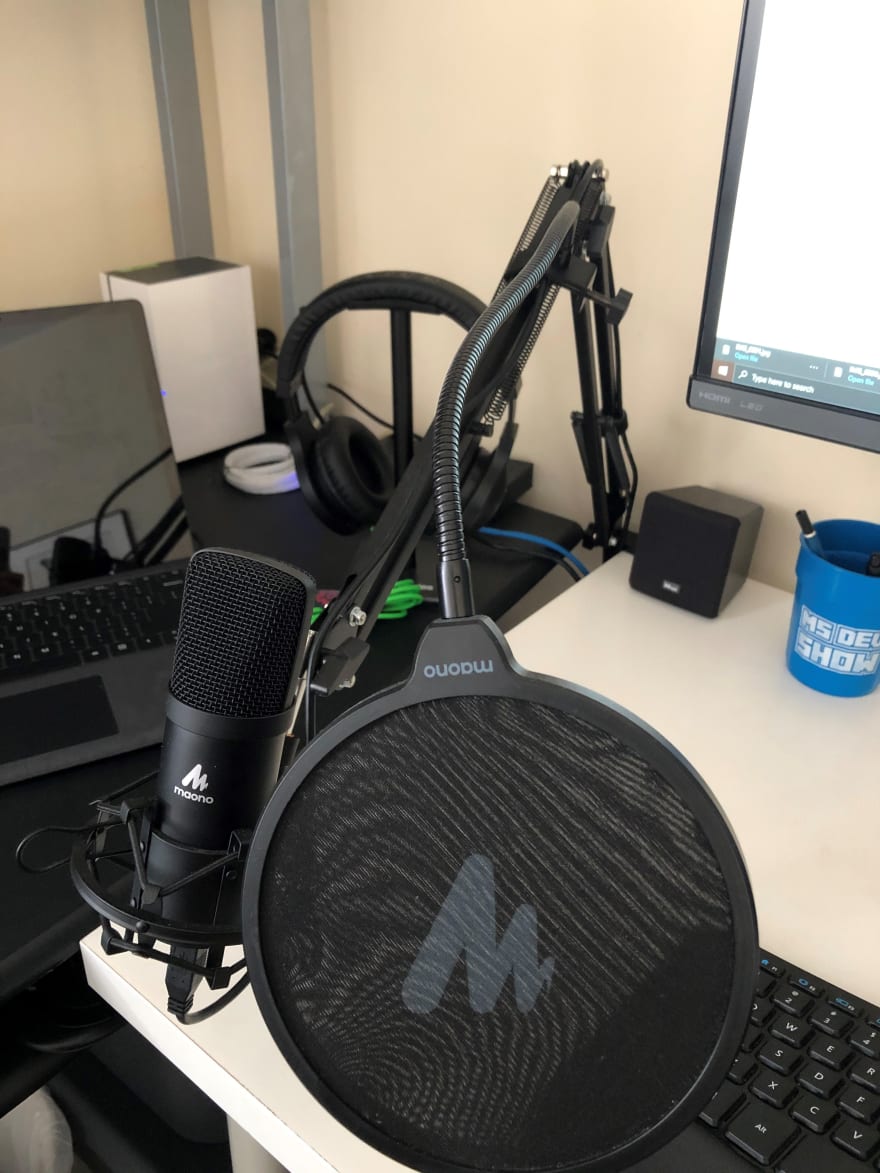 The nice thing is that it has all you need in the box: the desk stand with the table clamp, a portable stand, the shock mount, the pop filter and even a windscreen cap.

Highly recommended, if you don't need a studio quality mic.

I use 2 headphones, the Microsoft Sirface Headphones and a pair of Razer ones.

The Microsoft Surface Headphones are my main ones when listening to music or for calls when I'm travelling.

The Razer Kraken USB instead is my go-to pair of headphones for whenever I cannot (or don;t want to) use the external speakers for calls, videos, etc.

I have a QNAP TS-228A NAS where I save all my videos (Raw and finished) together will all my backups (of course I also use OneDrive for files and others, but videos and backupsets are just too big).
It has 2 x 3TB disks in Raid-1.

On the Networking side, I have a Linksys LGS108 switch, with 8 x 1Gb ports.

My router is a Nighthawk R8000P, which is awesome and has also super fast WiFi.

I also use laptops to complement my main desktop workstation. 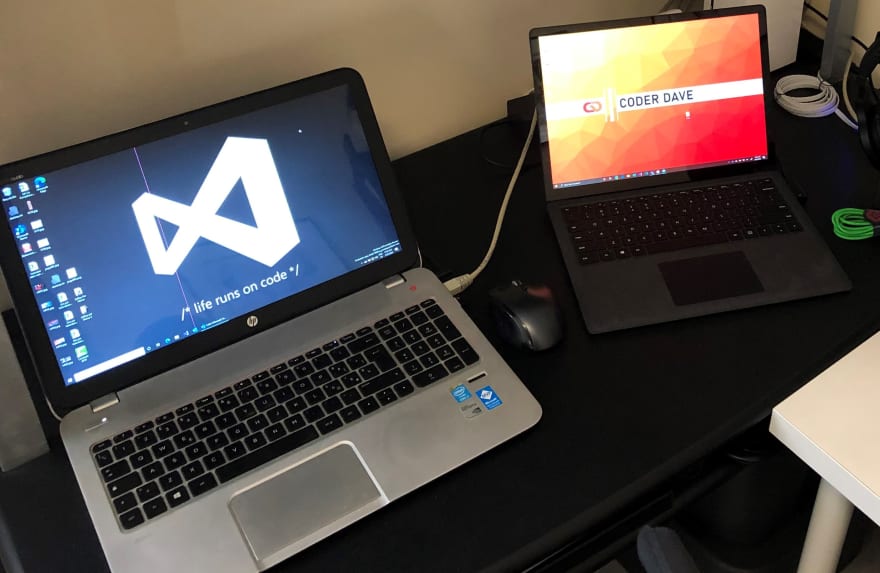 I use this when I travel and deliver the engagement at client sites.

I keep all the relevant documents and files on OneDrive so they are automatically shared across al my PCs, and I developed some scripts to synchronize other files and settings. Pretty sweet.

My secondary laptop is a HP Envy 15, with an Intel i7-4700MQ, 16Gb of Ram and 512 Gb SSD. Even though this machine is way older than my Surface, its CPU is so powerful that it outperforms the Surface Laptop 2 in some CPU-intensive tasks!

I use this laptop to do maintenance on some old projects that require a ton of legacy dependencies that I don't want to install on my more recent machines.

I am a big fan of Doctor Who and Alien... so I simply had to have some props :)

Have I missed something?

Anything else you wanna know? Let me know in the comments :)

7 tips for working from home

So you work from home now…