While I was working on YTAudio, Andrey drew my attention to another cool thing. The Media Session API.
The goal of this new API is to "enable web developers to show customized media metadata on platform UI, customize available platform media controls, and access platform media keys such as hardware keys found on keyboards, headsets, remote controls, and software keys found in notification areas and on lock screens of mobile devices." - W3C Media Session Standard, 2020-04-25

So in other words, this API allows us to introduce a much more extensive and integrated user experience by taking over control of the system interface for the audio (or video) player of our device. This makes a ton of sense if we are listening to the audio in the background (which is the whole point of https://ytaud.io). 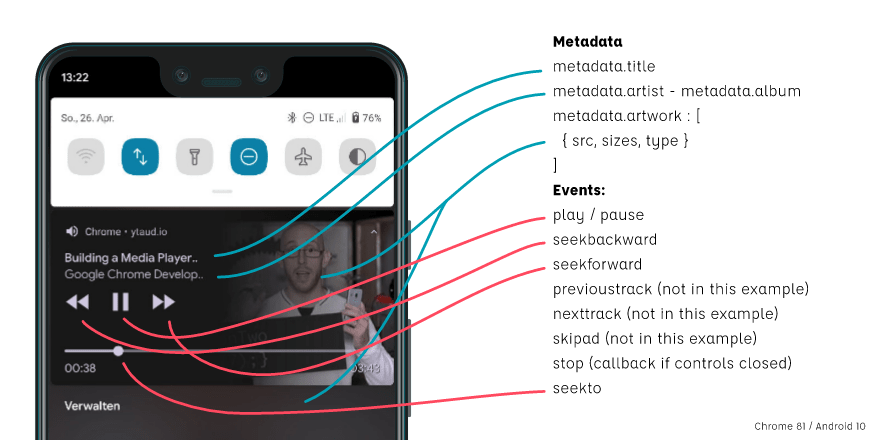 The integration is way easier than I thought. You basicly just pass a set metadata and that's it:

MediaImage
An artwork element then needs to contain at least a src:

If you want your user to interact with the audio player you can use various action handlers.

The following events are currently available:

In my own project (YTAudio) I'm using React with TypeScript. So I created a useMediaSession hook as a little helper that plays perfectly toghether with my useAudio hook:
https://github.com/nico-martin/yt-audio/blob/master/src/app/Player/hooks/useMediaSession.tsx
https://github.com/nico-martin/yt-audio/blob/master/src/app/Player/Player.tsx#L36

Since the W3C Proposal was only recently published as a first public working draft, the API is still quite experimental
So browser support looks not too good at the moment. But on the other hand this is a perfect example of a progressive enhancement, where you can use it to deliver a great experience for those who are using a device that supports it without breaking anything for the rest.

Creating a forum with React and Appwrite – Part 3

A Simple API for Web3 Data