Micro-frontends, as well as micro-services, are gaining popularity. Many organizations are adopting those architectures allowing multiple autonomous teams to work on the same applications without the limitations of large monoliths.

To have visual consistency across micro-frontends, one common approach is to have a shared library of reusable UI components, but basing this library on web components could be a problem in certain situations. We are going to create some dumb components to emulate it, analyze the problem, and see how to fix it.

Imagine we have the first version of a shared component library, containing two components:

In addition, two pages use those components contained in our shared library. Imagine that each page has been developed by autonomous teams.

Finally, we have the shell app that contains the pages. Once the app is built we will obtain the following node_modules tree.

So far so good. Everything is up and running and you can check the application online [see the code here].

Imagine now the requirement of release a breaking change on feature-a to fulfill new business requirements. A new major version of feature-a would be released.

As they are independent teams, each one releases their new page versions and the app is built obtaining the following node_modules tree.

As the user tries to execute the application he/she will find the following error. 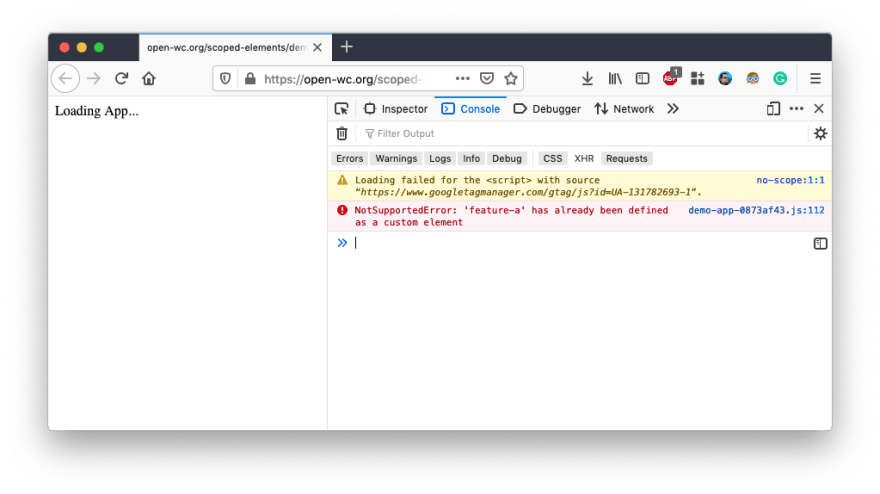 Looking at the web console we can read the following message

The problem here is that the custom element registry doesn't allow multiple versions of the same element to be registered and we are trying to register two versions of the feature-a component with the same name.

but why is this happening?

ES modules are only executed once per URL so

in both, page-a/index.js and page-b/index.js, resolves to node_modules/feature-b/feature-b.js so it's going to be executed only once. However, doing

If you want to dig deeper into how node resolution works you can read this article which explains it very well.

There are two possible solutions:

Recently Open-wc released scoped-elements as an experiment, allowing us to use different versions of the same web-component in a single document. Let's see how we can use it to fix our sample application.

First of all, we have to install @open-wc/scoped-elements.

Once installed, we have to modify our page's components to use it.

Let´s see what we did here:

We can see that the final result [see the code here] works as expected using two different versions of the same component.

But it's not all fun and games. There are some limitations using scoped-elements that are important to understand:

As a good practice, loading of duplicate/similar source code (most breaking releases are not a total rewrite) should always be a temporary solution. However, temporary solutions tend to become more permanent, so be sure to focus on keeping the lifecycle of nested dependencies short.

In a nutshell, it is all about stopping components from self-registering and telling them how they should be used. The concept is similar to how Scoped Custom Element Registries is going to work in the future.

If you like this feature please feel free to join the conversation for feedback, criticism, concerns, or questions.

scoped-elements is an experimental feature, so use it at your own risk and be sure to understand the previous limitations.

Was JavaScript Destructuring a mistake?

How to persistently store state in React? [usePersist]

4 Errors I Made When Building A Financial Application