My journey at Orbit started with this funny tweet by Josh.

Slack is down. That means you can't work. If you can't work, it means you need a new job. Orbit is hiring people who want new jobs, people just like you. Please see our careers page, since you can't be on Slack right now anyway. Thank you.

I wasn't looking for a new job but his tweet caught my attention.

The mission of Orbit, right there on the careers page, made me curious to learn more about the company. Building thriving communities and developer tools was very much aligned with my past career path and current interests. That ultimately led me to join the team.

I started my career as a self-taught software developer who didn’t own a computer. I worked from a cybercafé in a small African country with a very bad internet connexion. I quickly gained plenty of technical experience and contributed to products used by millions of people across the world. I even wrote a technical book and had a small startup exit! I attribute a large part of that growth to being involved in gaming and developer communities where I made friends, met mentors, and found clients.

After about ten years of basically 100% online life, I spent the past five building up the tech community in my country of origin, Benin, by serving as vice-president and CTO of the leading tech innovation hub, and co-founding a small product studio over there. It was awesome contributing to projects with real-world impact on tens of thousands of people. Over time, my involvement decreased as we were able to build a talented team that could continue moving the mission forward.

So, when COVID hit, I knew the next step of my professional career was due, and it was about the online-first life again. I spent the best part of 2020 helping Irawo, a community of more than 50.000 talents and creators in francophone Africa, launch new programs and develop a sustainable business model.

When I saw Orbit's homepage and model, something clicked. The Orbit Model was in line with my own experience of contributing and growing communities. I’d also long dreamed of building a CRM-like solution that’s centered around each customer’s experience as an individual. I think the Orbit Model captures the multi-dimensional aspect of how people interact in a community, or with organizations, products or services. It’s a refreshing break from the linear view of traditional sales and marketing funnels.

Needless to say, I was drawn to Orbit and decided to email the founders right away. I wasn’t looking for a full-time job, but they were looking for part-time consultants to help with integrations and other stuff.

Josh, the co-founder and CTO, replied a couple of days later, and, about a week after my email, we were on a call. The call was awesome! That’s when I knew I wanted to join the team instead of just contributing some integrations. Talking with Josh sold me on the vision. It also helped that the team was great at execution. They had made enormous progress in terms of traction and product development. And they were backed by some of the top VCs in Silicon Valley.

The opportunity to join this rocket ship about to take off was amazing. For me, this is the ideal time to join a startup in its growth trajectory, and I am very confident that Orbit is going to grow even faster and be successful. It was the best learning opportunity I could have at this step of my career.

After the call with Josh, he introduced me to Nicolas, who is a software engineer and the first non-founder team member. We scheduled a technical interview for the next day. It was not your typical algorithmic coding interview. It was a pair programming session where we worked together on actual production code to implement a new fun feature in the product. We had a great time together! Nicolas was happy to have another French-speaking programmer in the team so we spoke French. I learned a lot about the team culture, how technical decisions are made, etc. I could get a taste of what it would be like to work together.

After the interview with Nicolas, I went into my last interview with Patrick, 100% convinced Orbit was the next step in my journey. Patrick is the other co-founder and CEO of Orbit. He's a very high-energy guy. We talked about the company vision and the plans for the next months. I could feel his enthusiasm and how he was dedicated to reaching the goals. After our chat, he told me right away that I would receive an offer in the next few days. The offer came a couple of days later and, after a short negotiation, I signed it. It took less than a week from the first call to signing the offer, and I was starting the next Monday! 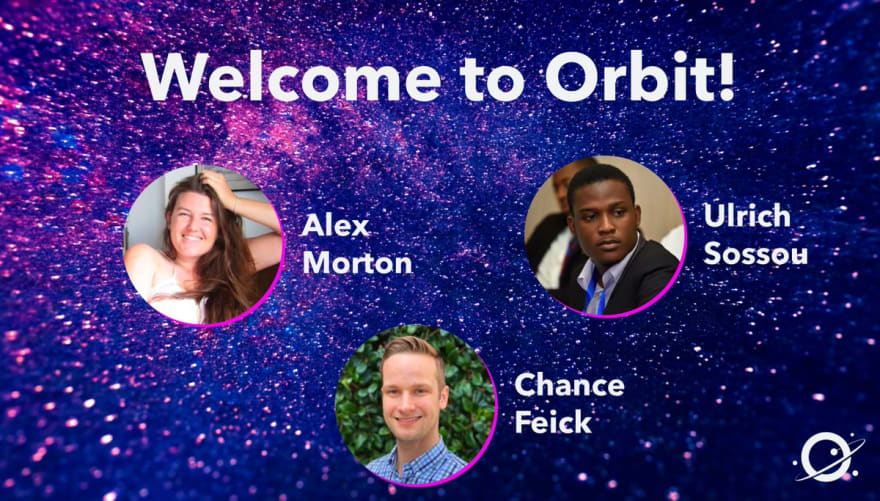 It's been a busy few weeks onboarding new crew members. If you haven’t met them already, here are the friendly new faces you’ll see around the Orbit community.

Onboarding remote employees can be difficult but, for a young company, Orbit onboarding is pretty solid. A few days before I started, Josh had shared access to all the communication and collaboration tools: Miro, Slack, GitHub, Airtable, Trello, and more. I went through basically everything and learned so much about the company, what product and strategic decisions were made in the past, why they had been made, most major events, the company values, the processes, and many more key points.

Being an early riser, I was even able to submit a small pull request before anyone in the Paris or San Francisco timezone was up on the first day! I got a handful of pull requests merged in my first week overall. This is how fast a team member can onboard when there are great asynchronous communication processes in place. It was like someone had onboarded me on the basics before actually talking with anyone in person. The calls with team members on the next few days were mostly around getting to know each other and getting help on my tasks.

The technical aspects of my new role are going very smoothly, and I haven’t had any difficulties with them so far. The hard parts were mostly around some emotional aspects of stepping into new shoes. Working with Orbit is my first full-time role not being in a founder or executive position, so it came with its challenges. Around the middle of the month, I was hit by a bunch of insecurities and, for 2-3 days, I wasn’t as productive as I would have loved. Would I be able to adjust to a different culture? Would I be able to perform at my full potential? Would my integration into the team go smoothly? Would I be given the kind of responsibilities I’m looking for?

I think it’s normal to have such interrogations when joining a new role. They would differ from one person to another, but they are frequently addressed with good communication with other team members, and some amount of self-reflection. The team has been handling the communication aspect very well so far. I have 1:1s with Josh every two weeks where I’m able to openly discuss all I have in mind. It also helped that Josh, Nicolas, and I were able to meet in person once for lunch.

Overall, my first month at Orbit has been an awesome experience. The team is made of caring and driven people with great product and business chops. I learned a lot in just a few weeks and I look forward to learning, growing and contributing more over the next months.

How do I handle brutal feedback from colleague?

3 Things I Learned After Failing my FAANG Interviews

Once suspended, orbit will not be able to comment or publish posts until their suspension is removed.

Once unsuspended, orbit will be able to comment and publish posts again.

Once unpublished, all posts by orbit will become hidden and only accessible to themselves.

If orbit is not suspended, they can still re-publish their posts from their dashboard.