This post was originally published in my blog, Pradeep CE.

Just before midnight a few days ago, I launched BassDrum, a Chrome extension to watch PrimeVideo in sync with your friends. It's 100% free and doesn't require you to sign up to use it.

BassDrum lets you create secret "rooms" that you can share with friends. When someone in the room changes to a video, plays or pauses it, it is synced to everyone in the "room" instantly. BassDrum was built to help people relive the days where we could still have friends over and have movie nights. (A little bit of context here: I'm writing this in the middle of the COVID-19 pandemic.)

In part one, I talked about my experience building BassDrum — what worked, what didn't, and the mistakes I made.

In this post (part two), I'll detail my experience launching it — how it was received, what I could have done better — and the lessons I learnt along the way.

I hope this is helpful to someone out there, who's trying to build something on their own!

I'll be honest here: once I got the sync working, I couldn't wait to get BassDrum out there.

I needed a few posters / banners for the Chrome webstore submission, but all I had were a couple of screenshots. So, I went on Canva and performed some drag-and-drop magic to get a couple of posters.

Then I wrote a good description, included upcoming features and FAQs in it, and added all these to the Chrome webstore submission.

I uploaded the extension, paid the fee, and was disappointed when it said that it would take weeks to review the extension and approve it. So fine, I thought, I could work on the launch while BassDrum was under review.

I thought a video was essential as well, to get the point across. But since I had no experience with video creation / editing, a couple of weeks seemed like a reasonable time (since this was a side project) to learn how. I had read a couple of posts on how to launch on ProductHunt, and my plan was to read up some more on it while the extension was under review.

But to my surprise, the extension was approved within a couple of days. And once I saw that it was approved, I just had to click "Publish", and the video never came to be. 😅

It was a very humble launch — I just published the extension on the Chrome webstore, and posted in a few places about it.

First, to my friends:

Then, to an extended social media:

I already had a "coming soon" type landing page up, and after publishing the extension, I quickly populated it by copy-pasting stuff from the extension description I submitted for the Chrome webstore. I spent all of 15 minutes on this, and it shows.

After I posted to ProductHunt, I also added the ProductHunt button to the site.

One thing I was pretty sure I didn't want to do, was collect people's email addresses. But I did want to hear from my users. So I took the middle ground, and encouraged them to tweet at me instead.

Here are the raw numbers: 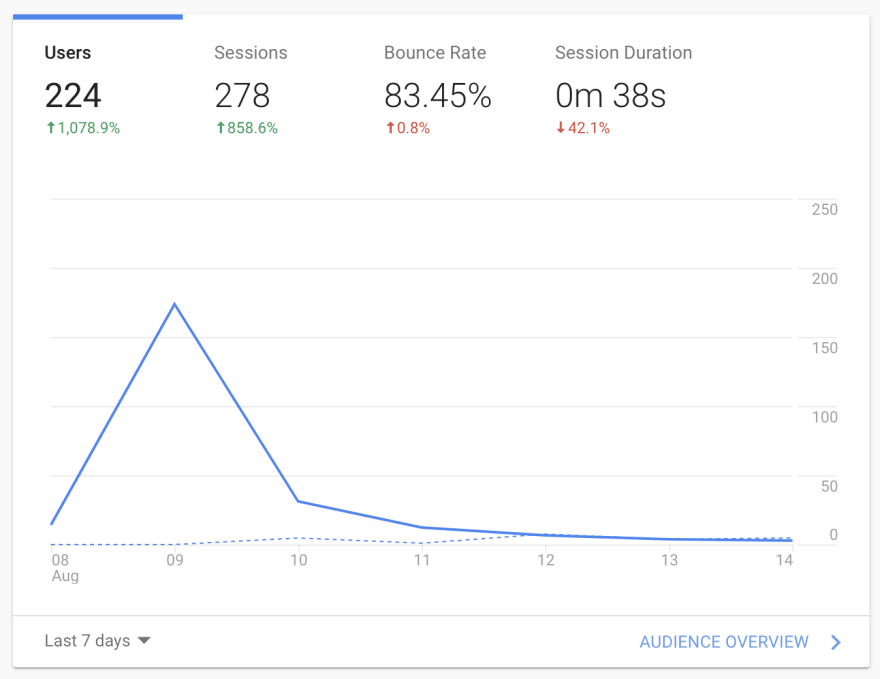 When posting to the Facebook groups, I took care not to sound like a salesman, and made it clear that I built BassDrum just for fun. I clearly mentioned that it was 100% free, and that I just wanted people to use it. I think a couple of these posts still got removed.

Since I didn't put any effort into a proper ProductHunt launch, and it was really late when I posted, I wasn't expecting any upvotes. It was heart-warming to see a few friends come and upvote it anyway. Almost all of the upvotes are from my friends, and I felt grateful to see that some of them had just registered — meaning they signed up just to upvote BassDrum!

Looking back, I should have put more effort and care into the launch. I was understandably eager to get it out there, but my saner self should have prevailed. If I were to do this again, I would plan for a week-long campaign after launch day — with posts, follow-ups and videos published at regular intervals.

I could have made the landing page much more helpful — possibly included some FAQs, and added a video demo of how BassDrum works.

I did not think through the marketing copy. Looking back, I should have written the website and social media copy from a user's perspective. If you read through the landing page, you will notice that I am focusing on what BassDrum does, instead of what problems it solves for the user. This is partly because BassDrum was a hard engineering problem for me, and it was only natural that I wanted to talk about how it works. Next time, I ought to beat that urge, and write as if I were the user.

Talking of copy, a couple of posts on Facebook and my post on Reddit got flagged. Lesson: next time, try to sound less like a scammer trying to sell to strangers (trust me, I tried this time too; but these bots are super-mean!).

I announced a private alpha on Twitter before the launch, but I could not find a simple way to ship it to the people willing to test. This would have been way easier to do for a web app, but is annoying for a browser extension. Lesson: don't invite people to test privately, unless you can ship to them in a convenient manner.

I'm going to take all the lessons I learnt building and launching this version of BassDrum, and apply it to the next version. I expect that BassDrum 2.0 will have chat features, and will support at-least one other streaming platform.

Harish, Viknesh, Vasanth, Naveen, Sanjev, Mukesh, and all the other wonderful people who were involved in the BassDrum story deserve huge thanks. You guys are rockstars! Thankyou!