Photon OS is a purpose built Linux flavor by VMware specially tuned for running in a VM and hosting container products such as Docker containers.
Octopus is a Continuous Delivery platform that is great for managing deployments and run-books via it's agents called Tentacles - Octopus has a strong commitment to their naming metaphors 🐙.

Octopus Deploy simplifies and allows repeatable, stable self documenting, institutionalized deployments and release management. Marrying the Strengths of Octopus with Docker deployments seems a natural Win-Win. Also I wanted to create, for myself, an easy to deploy-to, stable Docker environment to experiment and play with & learn Docker.

Both at work and at home I use VMware's ESXi vSphere for hosting and managing virtual machines. At work we've started using Docker containers for some projects and have Photon OS running these containers. We also use Octopus Deploy to manage our CD infrastructure. Our at-work setup uses the SSH model for communication to the Photon OS, this is because Octopus Tentacles (Octopus's name for their software agents) are not supported on Photon OS at this time. However, I'm a little determined and doggedly set out to find out if we could run an Octopus Tentacle as a Listening Tentacle on Photon OS.

Skip to things that work
I joke about this being the naive way to do it, but in most cases following this listed instructions is the best way to get a handled on how it should work... and where your setup doesn't match expectations.

According to the documentation we should be able to use the RPM install method (Photon OS's package manager tdnf uses RPM packages):

So we can see that Photon OS doesn't come canned with some of the common tools we expect in a base Linux install, but we can get them.

Ok, Let's try that original again... one line at a time

That worked and now we have the octopus tentacle repo added. We should be able to install next.

Oops, the tentacle repo seems to not work right. Looks like the URL is malformed (note the double / in there.) We will need to modify that repository entry.

and change the line:

Removing the trailing slash should allow it to work right.

Well this one is a problem. OpenSSL is installed in the base build of Photon OS, but nothing allows OpenSSL-Libs to be installed.

I can tell you from my experience, as best as I know, installing the Octopus Tentacle via RPM is a dead end for now. I've added an issue to the Photon OS' GitHub issue list requesting the OpenSSL-Libs package be included.

Lets skip some of the rest of the trial and error...

OK, if you didn't skip the optional stuff, you know that Photon OS is very lean and doesn't come with some quality of life things like wget preinstalled. We also learned there is some packages we would expect to be able to install but just aren't available on the provided repositories. OpenSSL-libs for example.

The Octopus Tentacle calls lsb_release and uses the output during its Health Checks. Thus if it is missing the Health Check will result in a warning. Photon OS doesn't provide lsb_release. I looked into lsb_release on Arch Linux (my current go-to flavor) and found it to be a script. I copied it from an Arch Linux install and it seems to satisfy the Octopus Tentacles.
I'll leave this step as an exercise to the reader. I couldn't find a good way to provide the lsb_release script that I used. I literally copied the text of the script into a new /usr/bin/lsb_release file, then set its executable flag.
I've not looked into better alternatives. I'm excited to see the recommendations of people with more knowledge in this area!

The Linux Octopus Tentacle requires a few things to get started so let's get those installed.

Note: the libstdc++ was needed when I was testing this in with the photon Docker image, but appears to be already installed in VMware's downloadable VMs.

Next let's get the Tentacle archive installer (again from the documentation, also modified to be more succinct):

At this point, the instructions at Octopus tell you to execute configure-tentacle.sh but that doesn't work right away as it doesn't have the executable flag set.

Great, now we can configure the tentacle service

This will ask you several questions related to configuring the Octopus tentacle. If you've not already, now is the time to get into your Octopus Instance and start getting ready there...

Octopus Deploy acts through agents called Tentacles. The Octopus server instance, either on-premises or their Cloud offering can do Polling Tentacles that reach out periodically to the server to see if there are any instructions, Listening Tentacles that wait for a communication from the server as needed and SSH targets that communicated over SSH on demand. We'll be configuring our tentacle as a Listening Tentacle. If your network has a firewall and/or router between the Octopus Server and the Tentacle, you will likely need to add some port forwarding or other firewall rules to allow communication to work as expected.

Octopus Tentacles by default use the TCP port 10933 to communicate but it configurable and often required. I use those ports plus others to communicate between Octopus Cloud and my tentacles though my firewall, each tentacle has an assigned port number and paired port forwarding at the router.

Let's now start configuring the Tentacle in Octopus,
In your Octopus Dashboard, under the Infrastructure Deployment Targets area, there is a big, handy button for Add Development Target.

This launches a short wizard that walks you through registering the Tentacle.
Select the Linux and Listening Tentacle options: 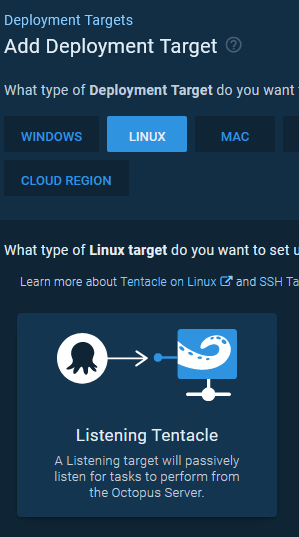 The next screen has many options that instruct Octopus how to connect to and communicate with your Tentacle: 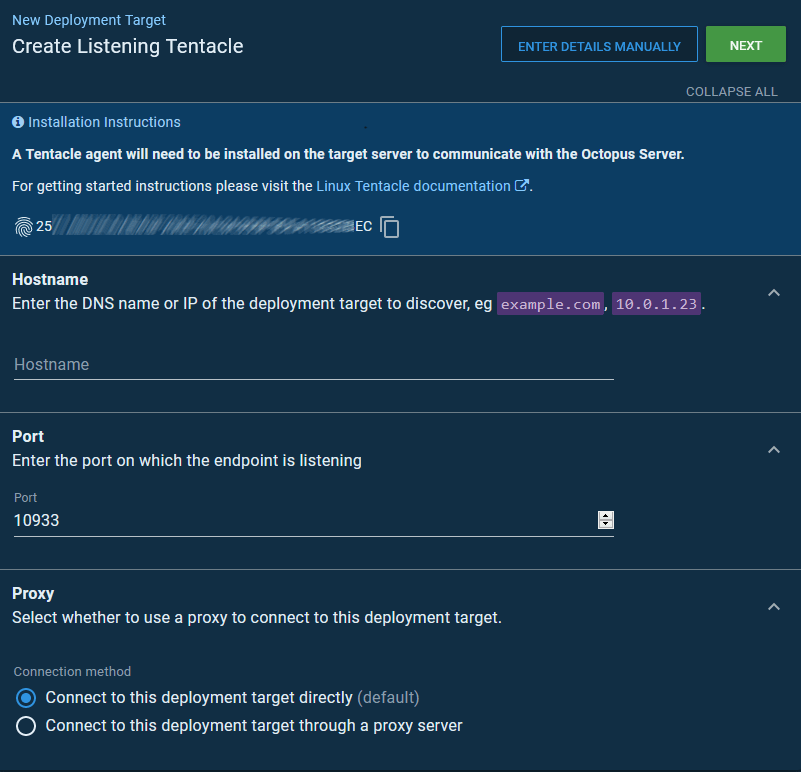 If you've not yet started the config utility for your tentacle, run

Your first prompt will be

This will give you a chance to give the Tentacle instance a specific name if you choose. I'm using the default.
Next prompt:

In this case, we are using a Listening Tentacle so the default is fine.
The next two options relate to log files and artifact deployment locations. Again I used the defaults.

The next prompt is the Port number to listen on. Be sure this matches up with the Port number as assigned in Octopus OR the port number on the private side of your port forwarding configuration. Today I'm using port 10939:

Next is the very important Octopus Thumbprint mentioned earlier. If possible copy-paste this to prevent errors:

Then a note will be displayed informing you of the configurations that will be run. As instructed, press enter to continue!

Hopefully when all is done, you will see this message:

One thing we have yet to do is allow port access at the OS level. This will be done with an addition to iptables

At first glance, running an Octopus Tentacle on Photon OS is not easily accomplished. However after a few false starts, based on some faulty assumptions, I did find a fairly simple path to success. They key missing pieces are the zlib-devel and icu packages along with a functioning lsb_release script.
A properly functioning Octopus Deploy Target provides may benefits such as Machine Health alerts and monitoring. Being able to orchestrate your Docker container activities with Octopus has smoothed out several of my own personal project's infrastructure considerations. 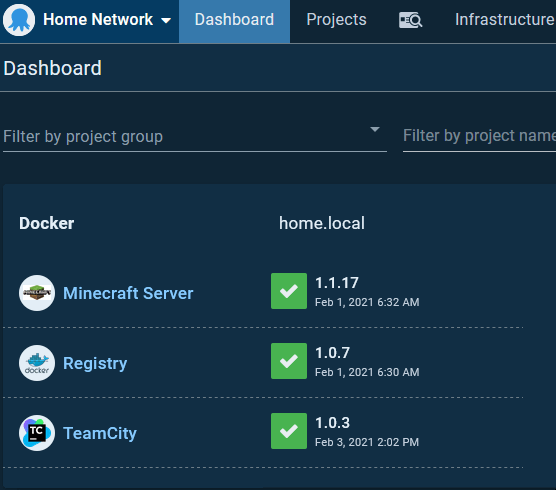 How to calculate percentile,Decile and Quartile in R-programming

One-liner to sum up numbers from a CSV file

Ryan Brown
He/Him; IT Swiss-army-knife, 3 programming blades, 1 hardware, 1 networking and infrastructure and a corkscrew. The tweezers have long since been lost.
The trouble with blog post views and vanity metrics
#analytics #writing #productivity #metrics
Is PolyWork the new LinkedIn for Developers?
#career #discuss
Getting Started With Apache Kafka
#microservices #kafka #broker #docker
Forem Open with the Forem app