In the world of React, efficient State Management is one of the most important things a developer has to perform in order to produce a solid website and Redux is one of the best ways of achieving this.
In this article we are going to see how you could get started with Redux and use it to easily manage state in your React apps.

Redux is a predictable state container for JavaScript apps.

Redux is used for managing and updating state in an immutable way.
This means that when changes are done to the state, the existing state isn't updated to a new value, instead a new reference of the existing data is created, changes are made and the old state is replaced with this.

Redux helps to create a single source of truth. Redux allows you to maintain all your data in one place, making life easier. All your data storage and manipulation happens in one place.

We are going to build a simple app where we can manage two entities, Posts and Todos. You can take a look at the finished website here. We will be

Setting up the Project

The main three components of a redux flow includes the:

3.Reducer - A Reducer can be thought of as an event listener which listens for actions and then updates the state ( if necessary ) and returns the new and updated state. A Reducer is a function which takes in the old State and an Action object and returns the updated/new state.

A Redux Flow begins with an action of a specific "type" being dispatched from the App UI due to some event. The action is taken up by the Reducer and then the Reducer changes the state according to the "type" of the action. It might change only a certain part of the state. The rest of the data is recreated and retained.

In the diagram above ,there are two small Reducer blocks in the Root Reducer block. This is because a Store can have multiple slices/pieces of state. Each slice of state has its own list of actions and has its separate reducer. However, it is important to note that the Store can accept only one Reducer i.e. the Root Reducer.
So the individual slices are combined to a Root Reducer and the individual slices are made accessible by mapping them to an object as we will see later.

Another SUPER IMPORTANT concept to understand is the redux flow when async tasks are involved. 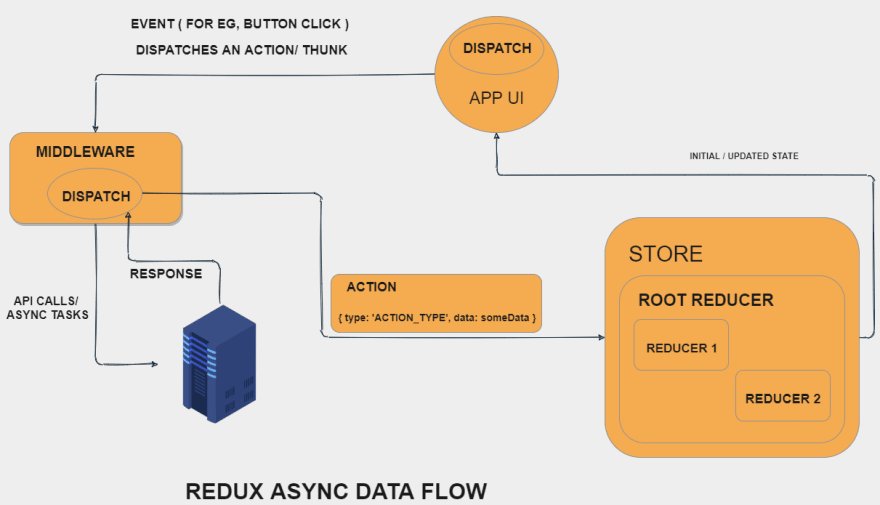 So how do we do this? We use thunks as a middleware.
Thunks are nothing but a function which returns another function.

So inorder to perform an async task we dispatch a thunk...The async tasks are performed and on completion, the necessary actions are dispatched. Check the diagram above to visualize the flow.

Going through the Code

Takign a look at the src folder we see

The Main container is the parent component which displays both the Posts and Todos components.

Let's go over the files in the the store folder first. 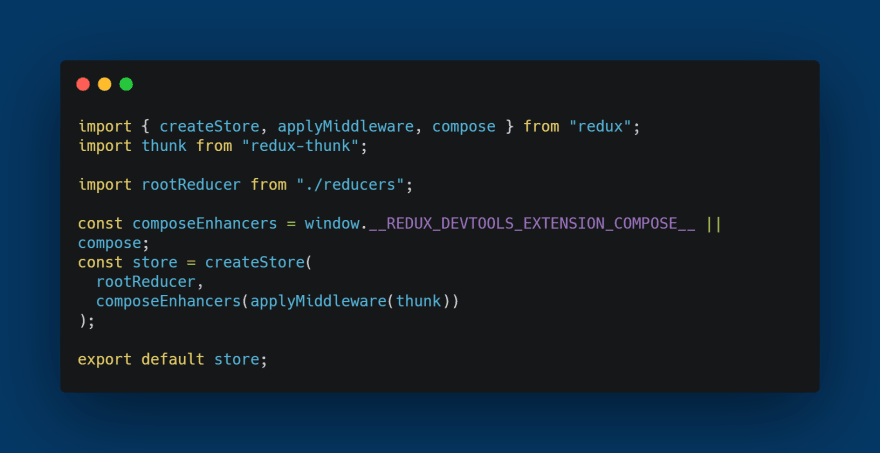 This file sets up the store which is going to be used in the React App.
First, we import the necessary things needed from the libraries needed to setup the store.
Also we import the rootReducer from the reducers folder.
Next we setup the Redux Dev Tools. ( For more info on connecting Redux Dev Tools, check here )
Moving on, now we use the createStore method to create the store and pass in the rootReducer and use add thunk as a middleware using the applyMiddleware function.

If you want to hide the redux dev tools in production, you can do this.

This file lists all the different action types which are going to be used while dispatching actions and also in the reducer while determining the dispatched action.

I am going to explain one slice ( Posts ) of the state. The concepts are same for the other slice ( Todo ).

For every type of operation we perform we write the required functions. If the operation involves any async task, we write one thunk function and other functions which will dispatch events when the async task concludes.

Here is another thunk which uses parameters. 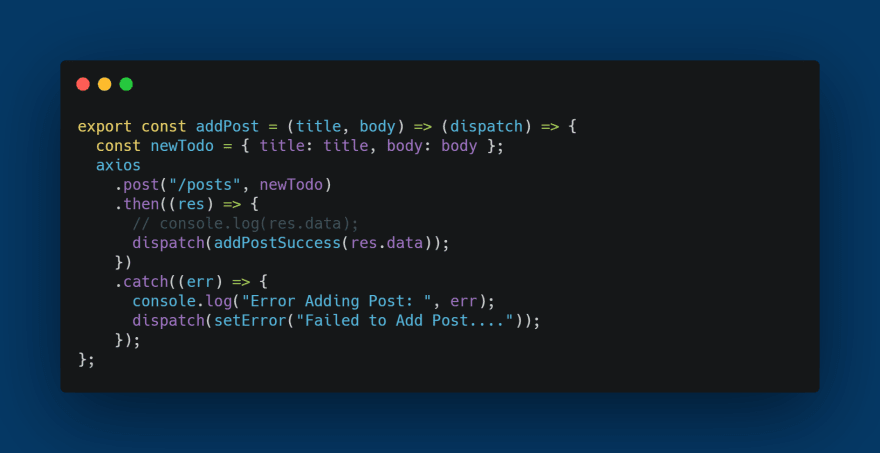 In this file all the actions from different files are imported and exported in one single object to be used in the React Components to dispatch actions. 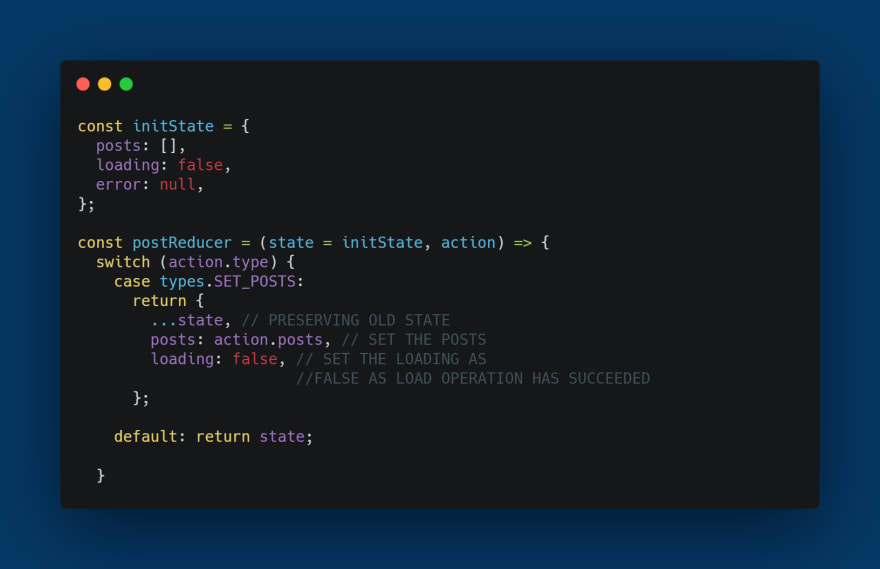 The MOST IMPORTANT point to remember while updating the state is that the entire state has to be recreated or in other words we need to make a deep clone of the existing state and update few parts and return the updated state.
Deep Cloning is really important if you are working with arrays, nested objects, or array of objects and you will be working with them pretty often.
The best and easiest way to perform a deep clone of all of these is to use JSON.parse() and JSON.stringify().

Here is an action in which we update the posts ,which is an array of objects.

This is an action of adding a Post. Here we can see that first the posts array is deep cloned.
Then an array is created with the new post and all the old posts are added to this array. And finally the updated state is returned with the previous state being recreated and preserved ( ...state ) and the posts array being updated.

You can go through the comments in the reducer files at each step.

In this file we combine all the reducers into one single reducer popularly known as the rootReducer. Notice when we call combineReducers we are mapping each reducer ( which pertains to a particular slice of state ) to a property of an object. This is used to differentiate the different slices of state in the React App.

Now the last step is to connect the store to our React App. 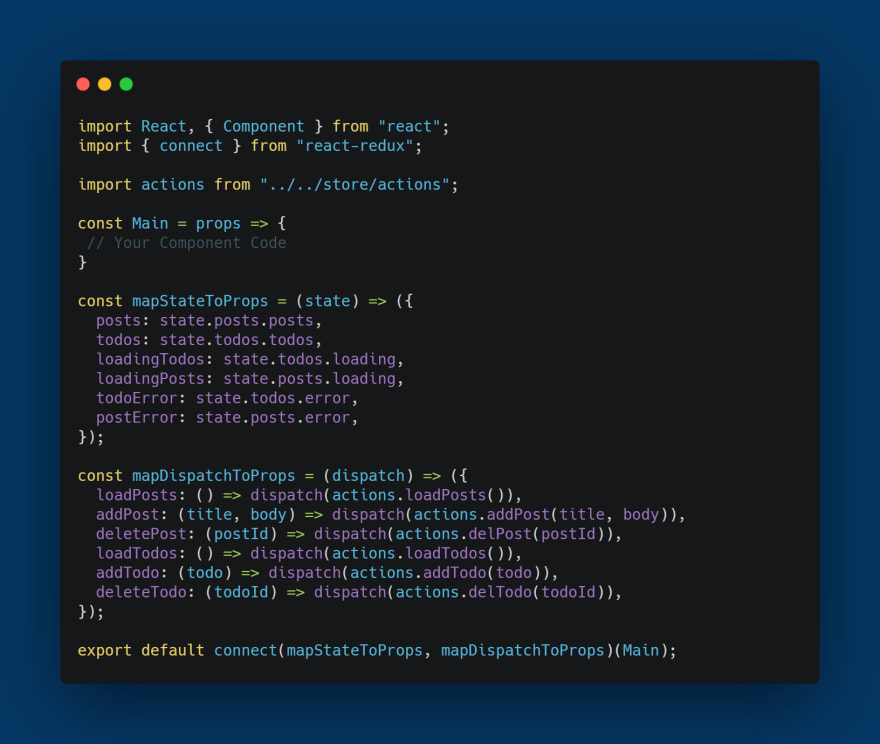 We need to create two constants -

Finally we call connect passing the mapStateToProps and mapDispatchToProps objects and then our component. And then we use these as props normally in our apps.

Click this circle icon to open the Redux Dev Tools. You can check all the actions that have been dispatched. In the section on the right, you can look at everything, actions, entire state data, difference in state data, etc.

So thats it. Hopefully you have a solid basic understanding of how Redux works along with React. Play around with the code. You can always learn more from the Official Docs. Feel free to raise any Pull Requests. Will be glad to see them. Until next time. 👋❤

More Articles by me:

How To Use TypeScript In A Node.js and Express Project