Have you ever sat in a planning session debating whether or not to make a new feature and its endpoints publicly available? It doesn’t seem like such a big deal while you’re working on it during the sprint, but eventually, you’ll have to release it to the public.

The issue comes when you need the endpoints to be available to other team members working on separate user interface applications. You want the endpoints accessible but not by the whole world. One method is to have the feature’s endpoints restricted by authorized groups or roles, so only certain people can interact with them.

It’s a great way to keep the feature out of a long running branch but only accessible to the people who need it. However, in this case, the feature is intended to be available to all. So, now you’re using role based access controls in an artificial way.

What if you could have the feature turned on in production, but only for the team that needs to exercise it before it becomes generally available? Then you wouldn’t have to worry about who has access to it because it would remain off for your end users until it was ready to go live.

Well, good news, you can! All you have to do is create a feature flag to control whether the feature is on or off.

In this short series of blog posts, I’ll show you how to turn a feature on and off, manage access to the feature, and how to automate the workflow so it’s on in development but off in production.

Using a feature flag in the frontend is relatively simple; you just need to hide whatever element you don’t want people to see. What if you want to hide something in the backend? That’s simple, you have conditional statements surrounding the logic, and you use the feature flag to toggle it on and off. Right?

Well, suppose you’re developing an API, and someone else on the development team is consuming it. What then? You can’t just hide your method calls, especially since they’re using a completely different application. You also can’t add the feature to your existing endpoints because that would break whatever application your teammates are building.

What if you could control access to your endpoints? You could create a set of endpoints just for that feature, then toggle the feature whenever you wanted, which would be a massive help when you’re ready to make it publicly available.

In this example, I’ll show you how to build a simple API for a pantry application to help keep track of what you have on hand.

If you don’t have .NET Core installed, you can find the SDK here.

ProTip: Did you know you can run .NET on Linux and Mac too? The above link has resources for both platforms in addition to Windows.

You can get Postman here.

Set up your .NET Core app

This post uses Visual Studio 2019. If you’re not on a Windows platform, you can grab the source here and use the editor of your choice to follow along. 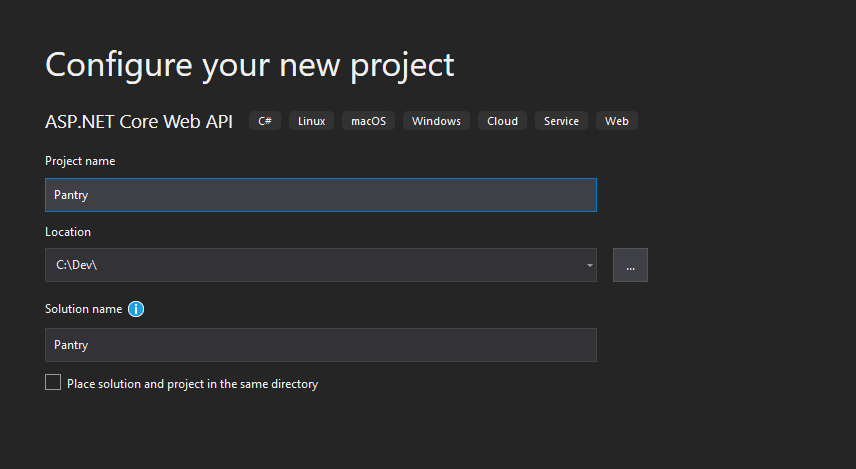 Be sure to uncheck “Configure for HTTPS.” 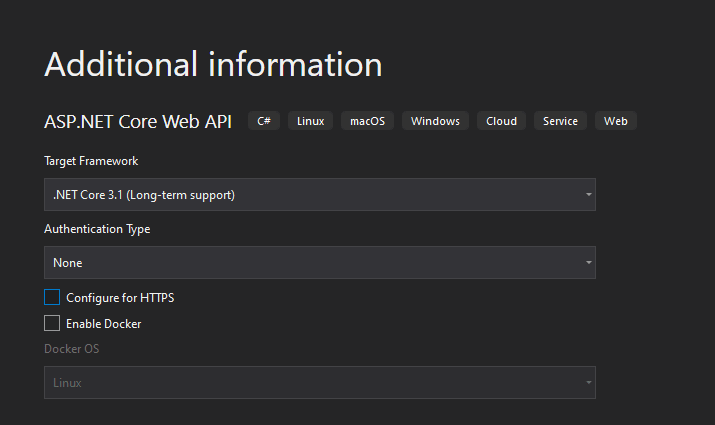 Suppose you want to use the .NET CLI version of this setup. Be sure you’re in the folder you want your app created in.

You’ll use an in-memory database in this demo to keep things simple. You could easily swap this out for any data storage solution you want.

If you’re using the command line, paste the following command:

The pantry has many different items in it so let’s make a generic model to describe them.

Start by creating a folder called Models, then add a new class inside named Product.cs and another called ImageLocation.cs.

The models have to be registered with a DbContext so later, the application will know how to build the database.

Create a class called AppDbContext.cs in the top level of the project. It’ll look something like this:

Now that the DbContext is in place you’ll have to tell the application where to find it. Open Startup.cs, add using Microsoft.EntityFrameworkCore;, find the section called ConfigureServices, and add the following to the beginning:

Here you’re telling the application to build an in-memory database called “PantryInMemoryDb” then supplying it with the AppContext so it understands how to make the database.

When you create a new Web API project, Visual Studio adds a default example called WeatherForecast; ignore that and create your own controller.

Note: if you’re using VS Code, just add a file called PantryController.cs to the Controllers folder.

Then replace PantryController.cs with the following:

Now tell the application to use the Pantry controller by default. Open launchSettings.json in the Properties folder and replace both instances of "launchUrl": "weatherforecast" with "launchUrl": "api/pantry".

Why and when to use Split feature flags

There’s been some debate about when is the right time to make the ability to store images generally available. Since there’s a chance it might be a while, you’ll keep the ImageLocation information in a separate class and table.

Simply speaking, you’d want to use a feature flag wherever there’s something you want in an on or off state and would like control of that state outside the application.

By wrapping the feature’s endpoints in a feature flag you don’t have to worry about leadership’s final decision. You continue to work on the project itself without losing time because the feature is loosely coupled.

Now you’ll need to create the feature flag in Split. You’ll want to give it a meaningful name, so it’s easier to keep track of, such as Pantry_API_ImageLocation. 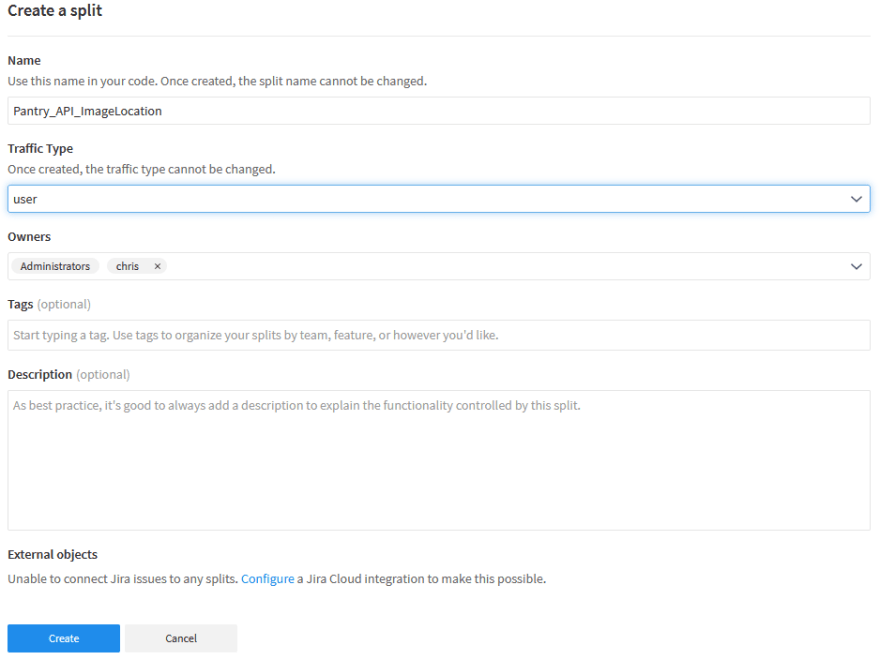 Click Add Rules, Save Changes, and Confirm. That’s all there is to it!

A default rule will always serve off unless you make changes to it.

You need a copy of the API key; click the icon in the Top left corner -> Admin Settings -> API Keys. Then click copy next to your Server-side Staging SDK key.

Open appsettings.json and replace it with the following, making sure to use your API key:

Add the following to Startup.cs

Then add the following to ConfigureServices in Startup.cs:

Now you’ll be able to inject the SplitFactory into any class you want via Dependency Injection, and it’ll already be configured.

Head over to PantryController and add using Splitio.Services.Client.Interfaces; in the top section.

Then you’ll need to add these three endpoints and a method to the controller:

Start the project and make a note of which port your application is using. You may need to replace the port number for the following API calls.

Note: If you’re using VS Code and the command line use dotnet run

Open up Postman and create a new POST tab.

Make sure to change the Content-Type in Headers to application/json for the two POST calls you’re about to make. You may need to uncheck Content-Type and create a new one at the bottom of the list.

For the first POST call http://localhost:37095/api/pantry, but in Body select raw and add the following:

Click SEND. You should get an HTTP status of 200 and a response of 1.

Click SEND. You should get an HTTP status of 404 and an error response. Why? Because the treatment is set to off by default meaning the feature is also currently turned off.

Lastly, create another GET to fetch specific image locations based on product ID using http://localhost:37095/api/pantry/image/1.

If the feature is turned off you’ll receive the same 404 error as before.

Currently, if you run them in the order shown above: The product is added to the database; all available products are shown; an image location can’t be added or retrieved as the treatment is turned off and the user will only receive a 404 response.

Let’s turn the treatment on!

Go to your Splits and click Pantry_API_ImageLocation or whatever you named your split. Scroll down to Set the default rule, click the dropdown, and select on. Click Save Changes in the top right corner, then when the Change summary page opens click Confirm at the bottom. 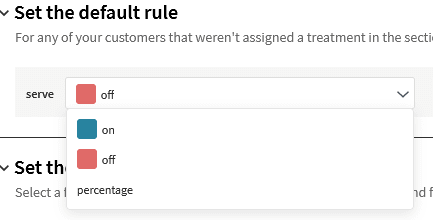 Now your treatment is set to serve on as default, which means the feature is available to everyone, and the endpoints are now active.

If you repeat the POST and GET steps for the pantry image above, you’ll be able to add and retrieve an image location.

Now you have your feature up and running, and you can turn it on and off whenever you want! Even better, you can show it to leadership and let them turn it on and off, so you don’t have to every time they want to take a look. One of the best things about feature flags is that you can release features to production and not worry about removing them right away because you can just turn them off. Using feature flags is a great way to enhance your CI/CD (Continuous Integration Continuous Deployment) workflow.

Interested in digging deeper on A/B testing and experimentation? Take a look at some of our other resources:

Check out the state of feature delivery in 2020.

Once suspended, split will not be able to comment or publish posts until their suspension is removed.

Once unsuspended, split will be able to comment and publish posts again.

Once unpublished, all posts by split will become hidden and only accessible to themselves.

If split is not suspended, they can still re-publish their posts from their dashboard.

Once unpublished, this post will become invisible to the public and only accessible to Split Blog.

Thanks for keeping DEV Community 👩‍💻👨‍💻 safe. Here is what you can do to flag split:

Unflagging split will restore default visibility to their posts.