Husky is a tool which enables you to create git hooks easy.

With a hook you could for example make code linting and code formatting mandatory on the developers machine instead of doing that on the CI service.

I found that setting up husky following husky's documentation does not work out of the box for Git Graphical User Interfaces (GUI).

How to enable husky pre-commit hooks for Git GUI's

To enable this feature for a GUI such as Tower or sourcetree follow these steps:

Create a .huskyrc file in your OSX home directory (~/). Open your terminal and run the following commands: 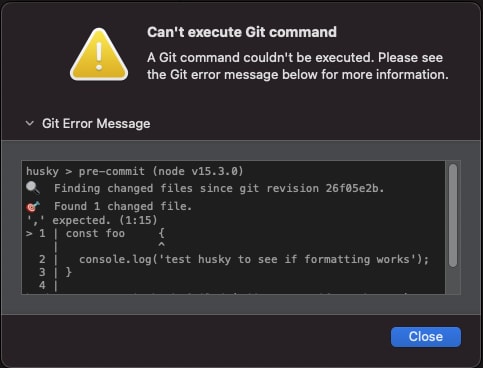 How to solve dyld: Library not loaded: /usr/local/opt/icu4c/lib/libicui18n.60.dylib

Adding the path to the husky file enables husky, but initially it gave the following error on my machine:

You can upgrade node to resolve this issue:

When using a node version package manager make sure to also include the following lines to .huskyrc:

Once suspended, studiospindle will not be able to comment or publish posts until their suspension is removed.

Once unsuspended, studiospindle will be able to comment and publish posts again.

Once unpublished, all posts by studiospindle will become hidden and only accessible to themselves.

If studiospindle is not suspended, they can still re-publish their posts from their dashboard.

Once unpublished, this post will become invisible to the public and only accessible to Remi Vledder.

Thanks for keeping DEV Community safe. Here is what you can do to flag studiospindle:

Unflagging studiospindle will restore default visibility to their posts.