The Flutter team announced at the Google IO event that was celebrated recently some web-related improvements that Flutter 3 brings. In the official keynote, they reported on the possibility of running Flutter in headless mode, and after that they showed some performance tests that presumably increase Flutter's performance on the web by using the latest standards regarding image decoding.

But is this true? And if it is, are the improvements they've made substantial enough for an end-user to notice?

Since I always like to check things out for myself, I've decided to run some performance tests comparing the difference between the previous version of Flutter, the version 2.10.5 with the new version 3 of Flutter.

In this article I am going to explain to you the specific tests that I have carried out, as well as the final result so that you can see and judge for yourself how Flutter 3 performs on the web.

In the official keynote, the Flutter team showed some screenshots in which a Flutter application appeared to load a bunch of GIFs. I have decided to follow the same methodology and take advantage of one of the open-source projects that I already have created in which the Giphy API is consumed and a lot of Gifs are displayed. I have cloned it and made some adjustments to it to add the web platform. After that, I executed it in debug, since Flutter web does not support profile mode, and I have observed the frames per second indicator. Then I have run the same test after upgrading to Flutter 3. I have repeated this set of tests on Windows, Mac and Linux to see if there is a performance improvement on all or just some platforms.

Before starting I am going to tell you the specific specs of the machines on which I am going to run the benchmarks. All the tests will be executed in Google Chrome, in its version 101. For the Windows and Linux tests I will use a laptop configured with dual boot with an Intel i7-8750H, Nvidia GeForce GTX 1070 Mobile and 16 GB of RAM. The tests on macOS will be executed with a MacBook Pro M1 from the year 2020 with 16 GB of RAM.

Note: for a better visualization of the tests, I recommend you to watch the video version of this article.

Starting with Windows 10 we can see the previous version of Flutter loading all the trending GIFs and reaching the figure of 35 FPS. After upgrading to Flutter 3 and running the same test, I've seen the indicator go up around 39 FPS; with which we can already see that in this first test there is already an improvement over the previous version.

I have repeated this same test with Chrome on my Mac 13'' with an M1 chip. Here we can see how it reaches 45 FPS, and after upgrading we can see how it goes up to almost 60 FPS, a very substantial improvement and superior to that observed on Windows, although we have to take into account that this is a different machine with different hardware.

To finish, I have executed this benchmark on the same machine where I have Windows installed, but this time on another partition where I have Linux Mint mounted. 32 FPS, not bad although it is lower than Windows. After upgrading there is a small improvement up to 38 FPS.

Now I'm going to give you a summary of all the tests. On Windows we have seen how we went from about 35 FPS to 39, which is an improvement of approximately 11%. On macOS is where I've seen the biggest difference, going from 45 FPS to 58, which equates to a 28% improvement. Finally, on Linux we have gone from about 32 FPS to 38, which represents an improvement of about 18%. 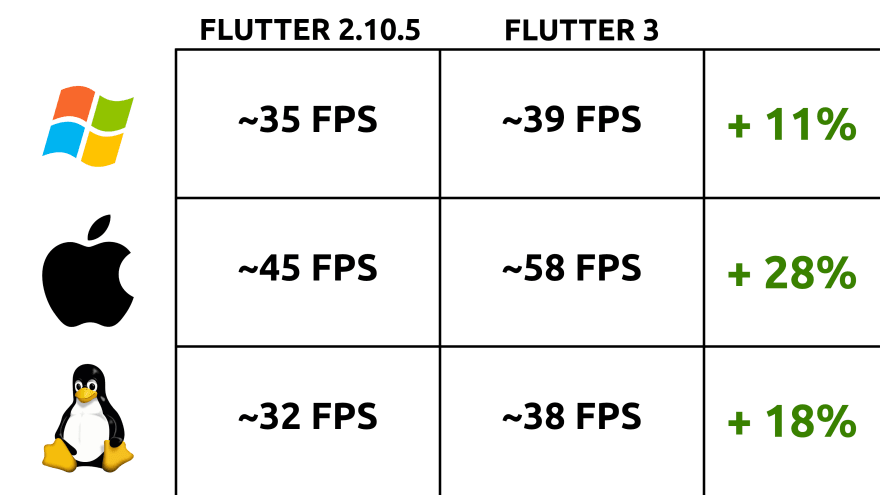 By the way, keep in mind that these tests are being executed in debug mode, without minified code, so it is possible that the performance is higher in release mode.

After having seen all this, I think we can say that there has certainly been a huge improvement in the performance of Flutter apps published in a browser. It remains to be seen if these improvements are also replicated in other browsers such as Firefox or Safari, but at least we know that it will be noticeable in Chromium browsers, so my most sincere congratulations to the entire Flutter team and its contributors for having made this excellent work.

Thank you for reading, and have a great rest of your day.

What is a Goroutine ? Find the right way to implement goroutine 🔥

David Serrano Canales
I am a software developer specialized in mobile apps. You can find more about me, my articles and my projects on my website: https://davidserrano.io/
Flutter PRO tip #1: Get the language, country and currency of your user
#flutter #android #ios #mobile
Create a Linux package browser in 5 minutes with Flutter 3
#flutter #linux #ubuntu #opensource
Write BETTER code with Dart 2.17 (Included in Flutter 3)
#flutter #dart #programming