Blazor is a Microsoft ASP.NET Core framework that runs .NET applications in the browser without needing any add-ons or plugins. On the other hand, Angular is a popular component-based JavaScript framework for building scalable web applications.

This article will take a deep look into the differences and similarities between Blazor and Angular to help you choose the best framework for your next project.

Blazor is a new ASP.NET Core web framework from Microsoft that lets developers use C# code in web applications. Blazor apps are built on existing web technologies such as HTML and CSS, but instead of JavaScript, the framework allows developers to use C# and Razor, a popular template markup syntax. Thus the name Blazor is a combination of browser and Razor.

Blazor allows developers to create interactive and reusable web UIs for WebAssembly-based client-side applications developed in .NET. In addition, it enables the developer to share code and libraries because both the client and server code is written in C#, providing a platform for the development of vibrant, contemporary single-page applications (SPAs) using .NET end to end.

The most significant selling point of Blazor is that it uses the newest web standards and doesn’t require additional plugins or add-ons to run in two separate deployment models, client-side WebAssembly and server-side ASP.NET Core.

Blazor has accumulated over 9,000 stars on GitHub, making it well worth one’s consideration for web app development. However, to fully comprehend Blazor, we must go further into its origins. Blazor offers two development options, server, and WebAssembly. In addition to that, there are three more development options available in Blazor:

Let’s discuss some advantages and disadvantages of Blazor.

Angular is a TypeScript-based frontend framework. It is rated as one of the most popular open-source web frameworks in the world. It helps developers create interactive user interfaces, single-page web apps, advanced web apps, and so on. Its predecessor was AngularJs, which used JavaScript. But with the development of the technology, TypeScript has replaced JavaScript in Angular.

Let’s conduct a direct comparison between Blazor and Angular.

Both Angular and Blazor are open-source web frameworks. The primary distinction is that Angular employs TypeScript while Blazor uses C#. There are, however, a few key differences between the two: 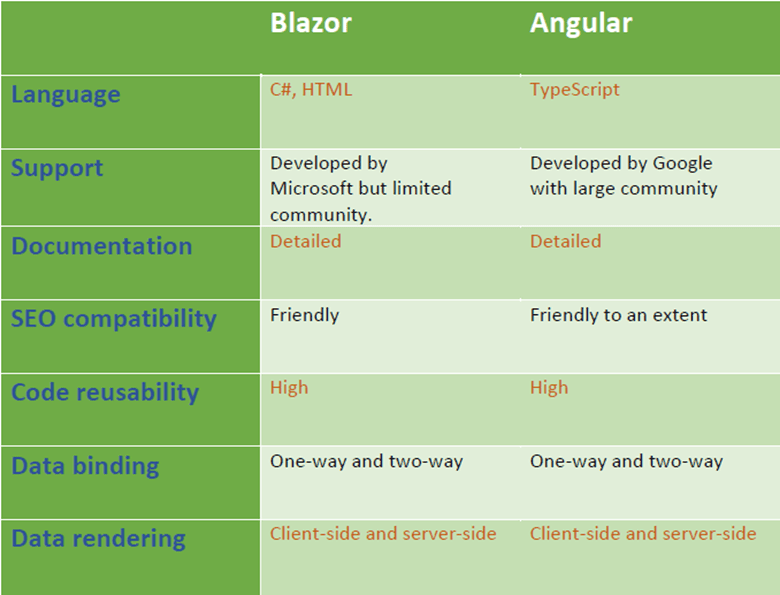 Programming language, age, and popularity are the most significant differences between the two. Because large firms around the world use Angular, finding a job as an Angular developer is also much easier. Furthermore, Angular is an excellent enterprise solution, and it is primarily used for such.

You should select the framework based on your objectives. Choose Angular if you want to ensure that the framework you choose has an enormous community to aid you if you need it. PWA is strongly backed by Angular. However, the server-side of Blazor has yet to catch up. On the other hand, Blazor will be more familiar with C# developers, while it makes things a bit messy for a seasoned TypeScript developer to get their hands on Blazor. If you’re looking for a completed product, Angular is the right choice.

When choosing either Blazor or Angular, you have to consider the following points:

When to use Blazor:

When to use Angular:

In this article, I provided a comprehensive overview of the features and usage of both Blazor and Angular. Both frameworks are impressive, but each has its benefits and limitations. Ultimately, the choice between Blazor and Angular should be made based on your project requirements. Choose the one that best meets your needs. I suggest reading their documentation for further information.

Now you know what to choose, and if you have already worked with them, please share your experience in the comments section below. Thank you for reading!

The Syncfusion Blazor suite offers over 70 components that work with both Blazor server-side and client-side (Blazor WebAssembly) projects seamlessly. Use them to build astonishing applications!

Syncfusion’s Angular UI component library is the only suite you will ever need to build an app. It contains over 65 high-performance, lightweight, modular, and responsive UI components in a single package.

For existing customers, the newest Essential Studio version is available for download from the License and Downloads page. If you are not yet a Syncfusion customer, you can try our 30-day free trial to check out the available features. Also, check out our demos on GitHub.

You can contact us through our support forums, support portal, or feedback portal. We are always happy to assist you!

How to use Docker in your Node and React Applications

TypeScript Utility Types: The 6 Most Useful

Once suspended, syncfusion will not be able to comment or publish posts until their suspension is removed.

Once unsuspended, syncfusion will be able to comment and publish posts again.

Once unpublished, all posts by syncfusion will become hidden and only accessible to themselves.

If syncfusion is not suspended, they can still re-publish their posts from their dashboard.