ElasticSearch and Kibana are, probably, the most commonly used stack for data analysis and visualisation. ElasticSearch is a notoriously difficult software to host and manage yourself. The managed service from AWS has long been one of the more reliable options along side the managed cloud from Elastic.co, the creators of ElasticSearch.

A lot of necessary features like authentication and alerts were only available in the enterprise edition. Until, that is, the release of Open Distro For ElasticSearch by AWS. While causing a great deal of controversy and ethical dilemma, ODFE adds authentication, access control, alerts, anomaly detection and, now, notebooks to the open source version release.

This makes ElasticSearch and Kibana:

We will use the AWS ElasticSearch service that sets up ElasticSearch and Kibana with ODFE. Since, this is just a demo we will set up a single t2.small node with 10GB disk size under Deployment type = Development and testing. We will use version 7.9 of ElasticSearch which is the latest on the service as of this writing.

AWS seems to be tracking the releases much better these days. The latest release on Elastic.co is 7.10.1.

Make sure you read through the notes on network configuration and fine-grained access control for ODFE (not available for t2.small). For a production system, you should use an instance larger than t2.small to support encryption at rest and, by extension, access control.

I am using Public access here for the purposes of the demo as this instance will be live only for a couple of hours. Google ElasticSearch breaches for the ever increasing counts of exposed servers.

An index is the highest logical level within ElasticSearch. Think of these as similar to tables in a database.

Creating an index needs an HTTP PUT as shown below:

Note that we are specifying in the mapping that our timestamp field should be interpreted by ElasticSearch as a date (really, datetime) field.

That's it, our ElasticSearch instance is ready to receive data.

Go to AWS IoT Core -> Act -> Rules to get started. We will create a new rule SendShadowsToElasticSearch. Like before, we will add a filter and an action.

We will need add back the timestamp field and we will also need the device_id. So, our SQL query will now look like this:

ElasticSearch is a first class citizen in the AWS IoT actions list. So, let's select that action and configure it: 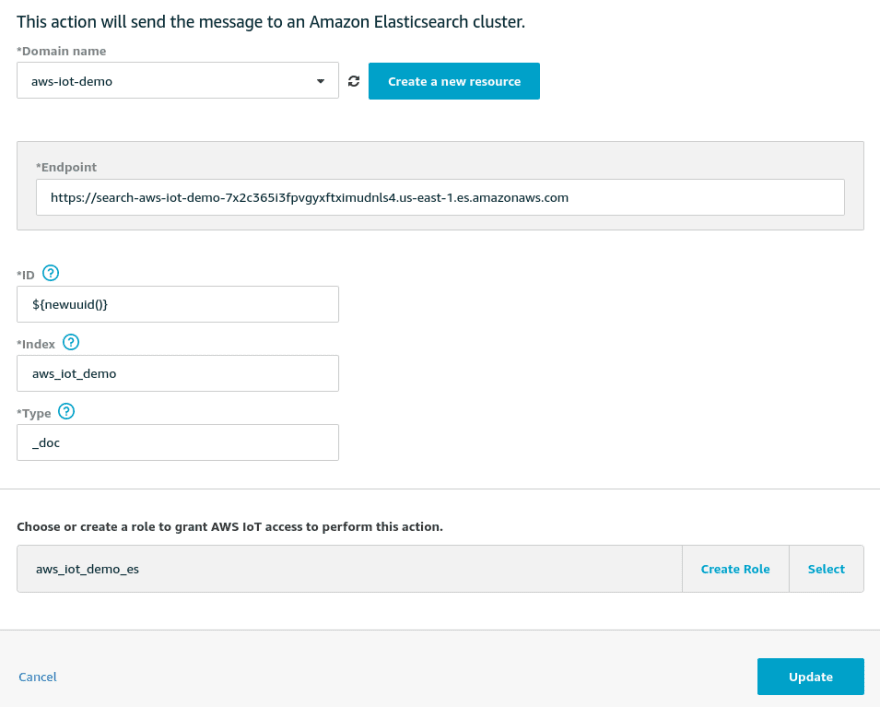 As before, we will enable the CloudWatch action in case of errors. 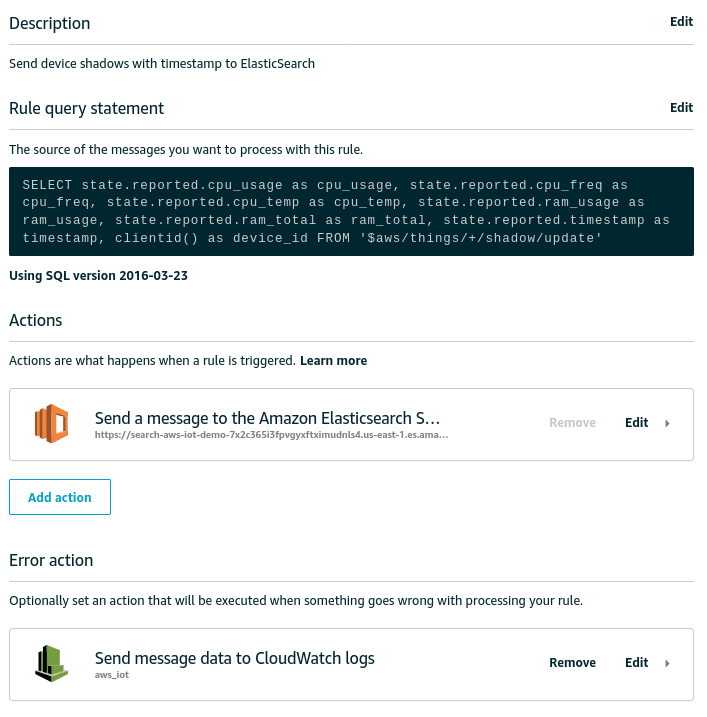 Let's start our simulators again and hop over to the Kibana to start analysing our data. The Kibana URL will be visible in your AWS ElasticSearch Console and should just be https://ES_DOMAIN/_plugin/kibana/.

Click on Create index pattern and walk through the wizard. Since your index has been receiving some data, the columns will already be detected. Ensure that you select timestamp as your date field.

With the index pattern in place, go to Discover in the sidebar to see your data streaming in. 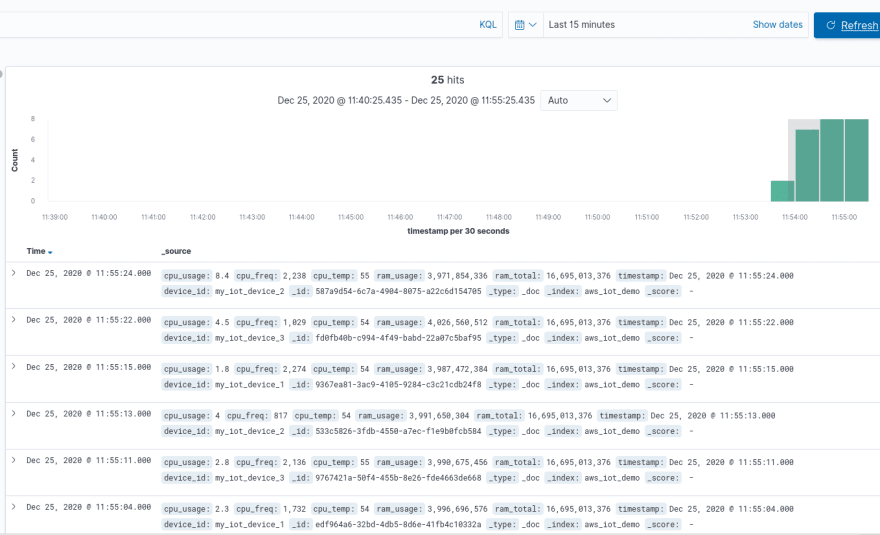 If you do see similar output, we can continue to visualisations. If you don't,

Once we start receiving data, visualisations within Kibana are easy to set up. Go to Visualisations in the sidebar and create a line chart for each of our metrics. Specifically,

Click on Update and your chart should look similar to this: 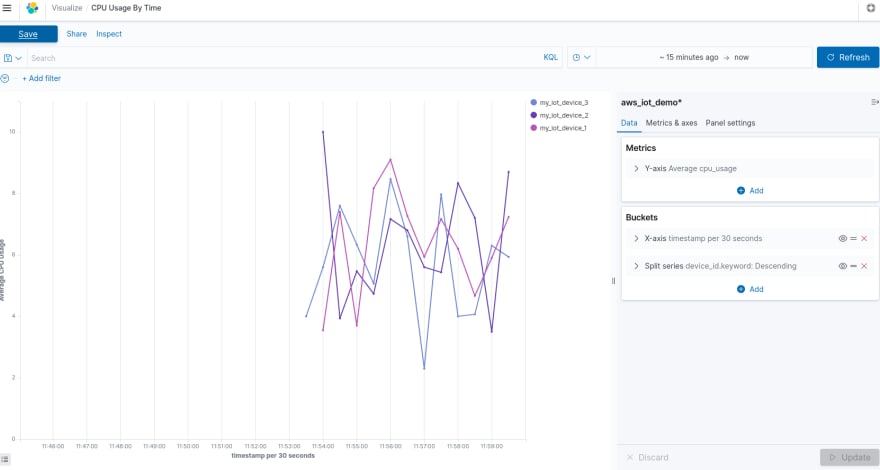 Create visualisations for the other metrics and add them to a Dashboard from the sidebar. Your dashboard should look something like this:

Unlike QuickSight, Kibana dashboards can be embedded on websites as snapshots.

Alerts in Kibana are independent of visualisations, unlike Grafana. They are created in two stages: monitors and triggers.

Monitors are queries that run on a schedule. Something like the one shown below. Queries can be defined using the UI/Visual Graph, via an extraction query or even, excitingly, anomaly detection (more on this in the next section).

Triggers compare the value returned by the monitor with specific thresholds. If the threshold is crossed, triggers can notify certain endpoints. At the moment, the built-in destinations are limited to Amazon SNS, Amazon Chime, Slack and Custom webhook. We will create a trigger without a destination so we can see the alerts in the UI. 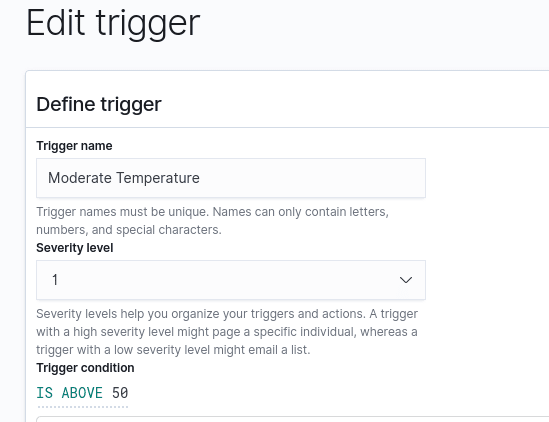 Once an alert has been triggered, it will be activated and will show up on the Alerts Dashboard. Active alerts can be Acknowledged to let the system know that an operator is looking into the issue. Once the metric/query is no longer in breach of the threshold, the alert is Completed. For a detailed description, check the docs.

Anomaly detection is a relatively new feature in ODFE and is getting frequent updates. As of release 7.9 on AWS, you can set up

We will explore this feature in detail in a future post. For now, see this post and the docs for more on anomaly detection.

Kibana notebooks are an experimental feature that let you build Jupyter-like notebooks with visualisations and descriptive text. It must be stressed that these are nowhere close to the functionality of Jupyter, which of course include the power of a complete programming langauge like Python. However, they are a start and we are excited to see how they progress.

ElasticSearch and Kibana are large, commendable feats of engineering that power everything from our search engines to our on-demand taxi services. The stack's versatility is clear from its suitability for time-series data too.

When comparing QuickSight, Grafana and ElasticSearch+Kibana, we would recommend:

Timestream + QuickSight if you

Timestream + Grafana if you

ElasticSearch + Kibana if you

Write to us at hello@iotready.co

An easy and secure way to protect API Gateway endpoints

Once suspended, tejpochiraju will not be able to comment or publish posts until their suspension is removed.

Once unsuspended, tejpochiraju will be able to comment and publish posts again.

Once unpublished, all posts by tejpochiraju will become hidden and only accessible to themselves.

If tejpochiraju is not suspended, they can still re-publish their posts from their dashboard.

Once unpublished, this post will become invisible to the public and only accessible to Tej Pochiraju.

Thanks for keeping DEV Community safe. Here is what you can do to flag tejpochiraju:

Unflagging tejpochiraju will restore default visibility to their posts.