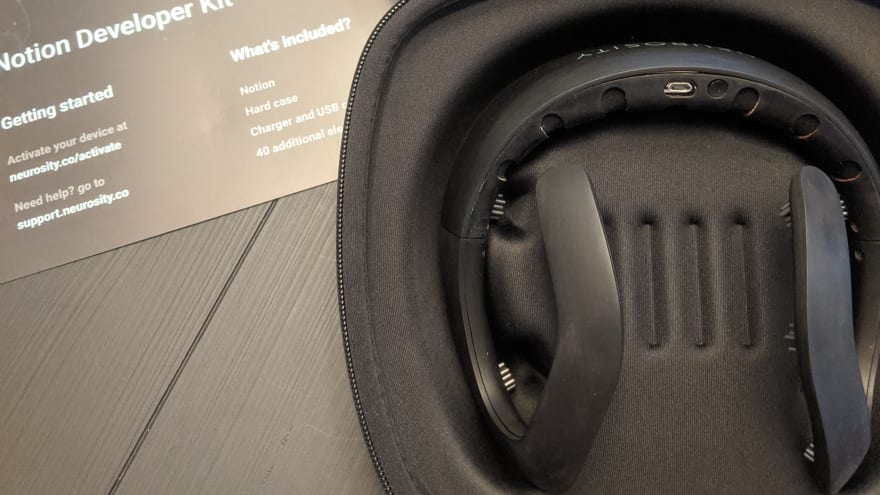 That brain of mine is something more than merely mortal, as time will show. - Ada Lovelace

Right now, billions of people around the world are tracking their health with some sort of device. Heart rate, sleeping patterns, exercise, steps taken, calories in and out, all kinds of metrics are recorded to help individuals better understand what their body is doing.

However, none of this data can help you understand what's going on in your brain. It's unfortunately difficult to monitor your brain activity, this is where Neurosity comes in. I was lucky enough to be selected to try out the first edition of their headset, the Notion.

The Notion reads your brainwaves and allows you to collection data about things like your calmness or focus, as well as train models to execute certain commands when it encounters the corresponding brainwaves. Essentially turning thought into action.

I really like data-driven health and it's been a really big part of my life over the last few years. There is something about graphing the body that really appeals to me, so when I discovered Neurosity I was extremely excited about being selected for the first round of devices released.

The Notion has APIs that allow you to interact with your device and receive all the data from it. I thought a good first experiment would be to wear the Notion while I'm at my computer working and try to figure out when I'm most focused. This seemed like a good first run as I plan to do a lot of experiments around focus and how different factors can affect it.

In this post I'll talk about setting up and recording the data, and in the next post I'll cover reading the data and visualizing it!

Setting Up the Infrastructure

To record the data :

To set up my app and GraphQL API, I ran the following commands:

I also created a DynamoDB table by using the @model directive in my GraphQL schema during API set up, like so:

Not only is a table created, but all the queries and mutations needed to perform CRUD operations on this data point were created in AppSync for me and the CLI generated those queries, mutations, and subscriptions for me for use in my app and Node script.

For more on creating GraphQL APIs with Amplify and AppSync, check out the docs!

Once I had the infrastructure in place it was time to create a script to run during the day to record the data coming out of the Notion.

All that I needed to start tracking my focus was a small NodeJS script that would listen for the focus events coming out of my Notion headset and send them to AppSync. It took less than 70 lines of code in total.

First I set up the API client and Notion SDK and then set up the listener for focus events coming from the headset. Now whenever I sit down to work, I can turn on the Notion, run this script, and all the data will be collected for me and stored in the cloud.

We can verify that the data is being stored by running a query in the AppSync console. 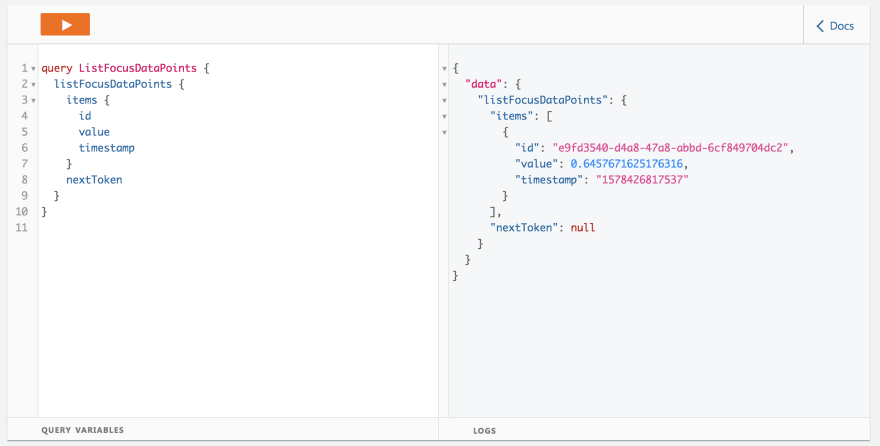 Now all that's left is to record some data! Stay tuned for the second part of this series where I build out the frontend and data visualizations!

AWS Hyperplane: Are Lambdas inside a VPC slow?

Once suspended, theworstdev will not be able to comment or publish posts until their suspension is removed.

Once unsuspended, theworstdev will be able to comment and publish posts again.

Once unpublished, all posts by theworstdev will become hidden and only accessible to themselves.

If theworstdev is not suspended, they can still re-publish their posts from their dashboard.

Once unpublished, this post will become invisible to the public and only accessible to Kurt Kemple.

Thanks for keeping DEV Community 👩‍💻👨‍💻 safe. Here is what you can do to flag theworstdev:

Unflagging theworstdev will restore default visibility to their posts.