One of the most promising features of the HTML5 API are Web Workers. JavaScript is of course single-threaded and thus will block its event loop while waiting on any long-running, synchronous operation. On the browser this could mean a frozen interface or worse. But when using Web Workers, this doesn't apply since they're entirely isolated browser threads running in the background, in an entirely different context from the web page and therefore have no access to the DOM, the window or document object.

Service Workers are simply special kinds of Web Workers that are installed by an origin server, run in the background and allow requests made to that server to be intercepted. So they kind of sit in between the browser and the server. Service Workers are a core part of modern Progressive Web Apps (PWAs).

Now, say, your internet is down. Since there's a running process that can intercept requests made to your site, we can write that process to display a custom, previously cached page rather than a miserable, grey page of death. It's cosmetic. Sure. But trust me, your end-users will notice. Don't believe me? Turn off your Wifi and reload this page. Looks pretty cool.

Admittedly, this article is meant more to be a leisurely excursion into two relatively advanced topics than a perfect solution to a critical problem (which it isn't). And the reason is...well why not.

Adding Our Service Worker To The Browser

On the Rails side I'll follow this directory structure to store the service worker script and the offline assets:

Thus the relevant URIs would be /service-worker.js, /offline/offline.html and so on.

The following script will register a given service worker in your browser. On Rails, just dumping it inside the manifest application.js (or a custom manifest file at another location) will work. Albeit it'd be much better to use a separate file:

After which you can see the following in the Chrome DevTools:

Some out-dated browsers don't support Service Workers and since I'll be employing ES6 as well as the Cache API (for storing the offline page), let's check for their availability first:

Alright, let's get to the meat of the story: the service worker itself.
After registration, the browser will attempt to install and then activate the service worker. The difference between these two will become clear shortly. For now, it's enough to know that the install event only happens once (for the same service worker script) and is a great place to hook into and fetch & cache our offline page.
As I mentioned earlier, the service worker can intercept requests made to the server. This is achieved by hooking into the fetch event.

The promise passed to event.waitUntil() lets the browser know when your install completes, and if it was successful.
It's important to know that "failure" of a request passed through the fetch handler, using the Fetch API, doesn't mean a 4xx or 5xx response, unlike other AJAX implementations. That promise only fails in case of a network error or wrong CORS config on the server. Which is exactly what we want.

So our service worker in its current state will work. Except...

All valid questions. Let's take'em on one by one:

Note: The new worker won't be activated, i.e. in running state, until the previous worker is removed. This requires either a new session (new tab) or a manual update (the button for which is visible in the Chrome console picture above). We don't need to worry about this for the most part.

You may ask why we purged the previously cached assets in activate and not install. This is done because if we were to purge the out-dated cache in install, the currently running worker at that time, still the old one because the new one hasn't yet been activated, might crash because of any dependency on the previous cache. Now, in our case there is no such strong dependency. But it's generally a good practice so I chose to follow it.

OK, But Where Does Rails Middleware Come In? And By The Way, WTF Is Middleware?

As I mentioned in point number 3 above, ideally service workers shouldn't be cacheable because we may require the clients' browsers to update them ASAP. This is our ultimate objective and middleware is just a means to that end. There could be better ways of doing this. Say, serving assets via Nginx and configuring it to not make service workers cacheable. But let's do it this way:

Middleware is basically any piece of code that wraps HTTP requests and responses made to and received from a server. It's very similar to the concept in Express. When a request passes through the entire middleware stack, it hits the app and then bounces back up the stack as the complete HTTP response.
As far as we're concerned, it's some code that a response generated by our Rails app has to go through before being returned to the browser. Rails is a Rack-based framework and this is what allows us to use this construct. Getting into the details of Rack here would probably be an overkill though. 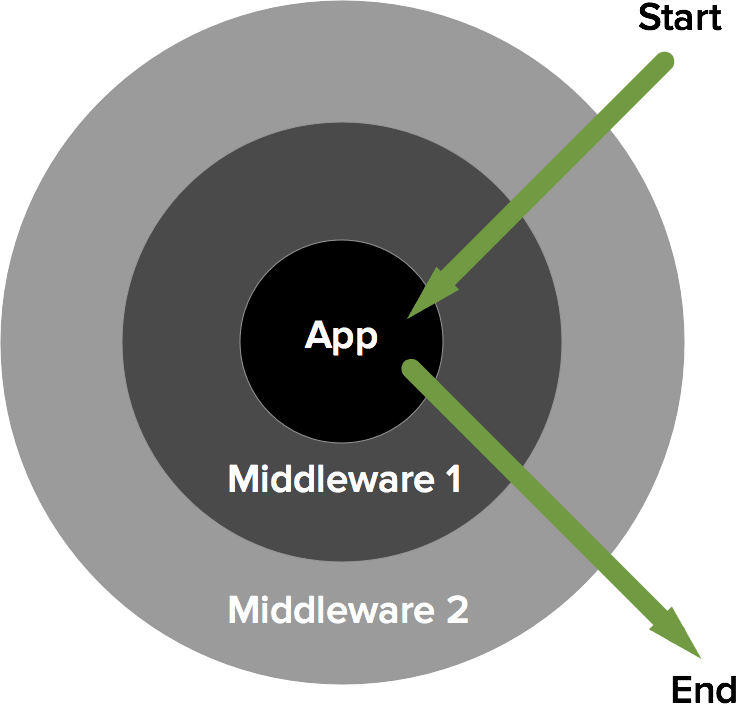 Rails middleware specification is really simple: it just has to implement a call method. Let's create a new directory app/middleware and put a new class in:

We'll need to register our middleware:

If you run rake middleware you'll get a list of all the middleware being used by your app: 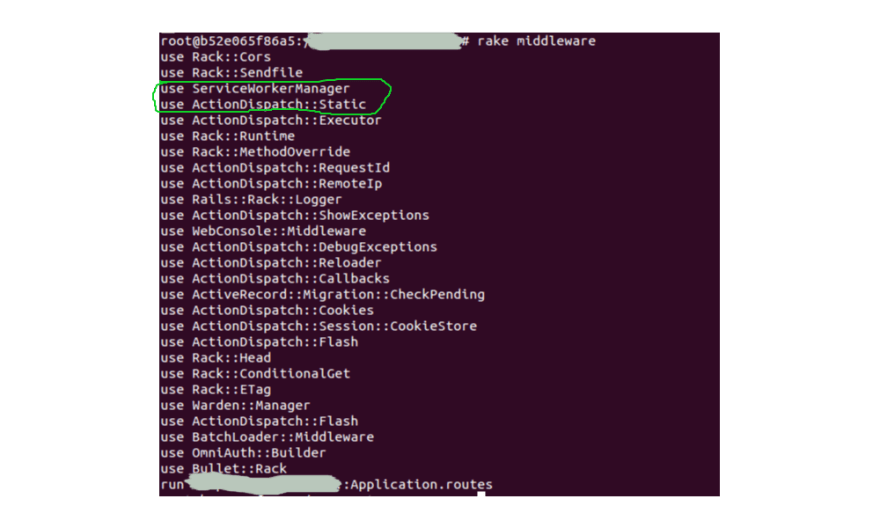 As we specified, ServiceWorkerManager has been added right before ActionDispatch::Static. The reason we added it at this particular position is because ActionDispatch::Static is used to serve static files from the public directory and automatically sets the Cache-Control header as well. In fact, static file requests don't even go through the rest of the middleware stack or the app and are returned immediately. So by placing our middleware before it, the outgoing response will have to pass through our middleware.

Here are two alternative ways to use your own middleware classes:

And we're done! Load your site, shut down your local server and try refreshing the page to see offline.html.

I've intentionally left out using the asset pipeline to transpile, minify our worker script and offline assets as that is not straightforward: fingerprinting (dynamic URIs that always change with the asset's content) & long-lived caching headers (which we just got rid of) cause problems with service workers. These are explained & solved very well here: a much better way to do all that we just did IMO :)

Offline page caching was just sort of a case study I used. Service Workers can be utilized to implement much richer features like background syncing, push notifications & others. And so can middleware: custom request logging, tracking, throttling etc. Hopefully this was a good learning experience and has motivated you to explore the two subjects further.