A lot of people complain that OOP has done very poorly. Well sure but a lot of things have been done poorly but our enemy is not Object Oriented Programming.

The real conversation is not the difference between object-oriented and functional, the difference is Imperative versus Declarative style of programming.

Well as a mainstream programmer, we've been programming an imperative style for a very long time and of course, the world is moving towards more of a declarative style of programming.

So the real question is to program imperatively or should we program declaratively and which one should we choose?

What is the difference though between these two paradigms?

Imperative style of programming is where you tell what to do but you also have to spend the time and effort telling how to do it. So not just the what but also the how. First do this and next do that. 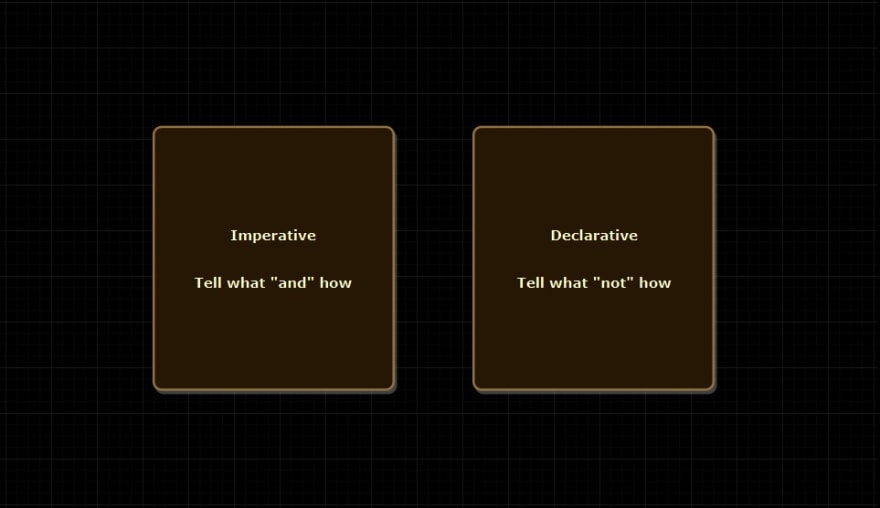 Let's look at an example

So here I have a little program. I have a list of names but I want to know if our good friend Nemo is on the list.

So how do I find if Nemo is on this list?

This is an example of an imperative style of code as we are not only explicit about what to do but also how to do it.

Now let's take a look at code, that is an example of a declarative style of programming.

Declarative style is where we tell what to do and not how to do it. It is an abstraction on top of imperative systems that opens the whole new world of possibilities to program in asynchronous and event-driven fashion without having to think about how to it works.

Once suspended, vaibsgharge will not be able to comment or publish posts until their suspension is removed.

Once unsuspended, vaibsgharge will be able to comment and publish posts again.

Once unpublished, all posts by vaibsgharge will become hidden and only accessible to themselves.

If vaibsgharge is not suspended, they can still re-publish their posts from their dashboard.

Once unpublished, this post will become invisible to the public and only accessible to Vaibhav Gharge 👨🏻‍💻.

Thanks for keeping DEV Community 👩‍💻👨‍💻 safe. Here is what you can do to flag vaibsgharge:

Unflagging vaibsgharge will restore default visibility to their posts.