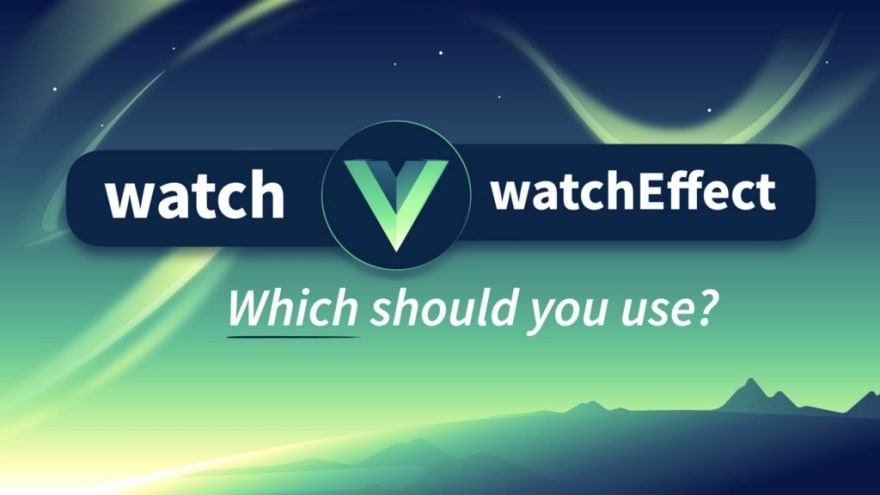 If you’re new to Vue 3, or you’re coming from a strong Vue 2 background, there’s a good chance that the split API now for watch and watchEffect may seem redundant, or even confusing.

Today we are going to unwrap the core differences between the two so that you can use the best tool for the job in your day-to-day code.

Due to the nature of the API, I will have to assume that you are comfortable working with Vue 3 and the Composition API. Previous knowledge of watch is highly recommended, since we won’t be covering the use of watch as a composition tool, but instead focus on the differences between watch and watchEffect.

A quick warning/refresher first… Whenever we want to watch a reactive value in Vue: ref, reactive, computed and trigger a side effect, we use watch to be able to react to the changes of the reactive property.

Keep in mind that a very common pitfall is to misuse watch as an alternative to computed. If you find yourself setting the value of another reactive property inside of your watch function, or you’re trying to think of a way to return something out of it, you’re probably better off using a computed property.

Watchers in Vue.js are fantastic, and they have many use cases. They can especially come in handy when you need to trigger a side effect on external libraries such as Swift.js for example, when a property changes.

As we compare Vue watchers, I want to start with watchEffect because it is the most basic use of reactive dependency watching. But let’s not get ahead of ourselves with fancy terms.

First, to be able to use watchEffect, you have to import it from Vue. It is a function that accepts two parameters, the most important one being the first: a function. The second param is an object of options that are aimed at more advanced usage, including hooks, which are outside of the scope of this article.

All of the code that we place inside of the function (the first parameter) will trigger immediately as JavaScript reaches this line of code. This is very important, so keep it in mind!

Now the most important part about watchEffect is that any and all reactive values found inside of this function will become its “reactive dependencies.”

As I mentioned earlier, whenever this watchEffect call is reached, it will trigger the contents of the effect function that we just wrote. So that means that our SomeSliderAPI.setOptions method will be executed with the current value of our properties.

This API is just a demo, but as far as watchEffect and Vue understand it, three reactive values were “used” inside this function: slidesPerGroup, touchEnabled, and smoothScrolling. They are all part of the props reactive object.

The power of watchEffect lies in not having to manually declare the reactive values that we want to be watched. Imagine now that we need to add more and more props to our component to match the API of our external function. It can become cumbersome, so let’s refactor the code to simply use a spread operator.

This code will work exactly as the first example, with one huge important benefit for us as developers. All the props in the component are now being “watched” and we don’t have to declare every single one again inside the watchEffect call for our trigger to know about them.

If you want to play with a simplified example using reactive instead of props, you can take a look here in the SFC playground.

If you come from a Vue 2 background, watch behaves almost the same as what we already know as the Options API watch.

In the Options API, we write a watch(er) by declaring it inside of the watch property, as a function. The name of the function reflects the name of the reactive piece of data we wish to “track” for changes.

For example, in a component where we have the prop slidesPerGroup, we would write the watcher as follows.

In Vue 3, and when using the Composition API, the API for watch is a little different but more powerful and flexible.

If we simply were to switch our watchEffect call from the last example to use watch instead, we would have to take a few steps.

The first thing to notice is that the function that we pass to watch is no longer the first param, but instead we have a source.

A source for a watch function can be one of the following, as stated in the documentation:

This comes with a very clear disadvantage: we have to manually declare exactly what reactive values we want the function to “watch” to re-execute the effect function.

On the other hand, this comes with a very important advantage: we can manually control which reactive properties trigger this effect.

Imagine that you didn’t want the smoothScrolling property to trigger the watcher. You could simply remove it from the source param. However, since props is a reactive object (and as we saw in the list above, we need to use a ref or reactive object), we will need to add an additional step and extract the props we want to use into refs.

You can test the above change in this SFC playground example.

Now, whenever the smoothScrolling property triggers the watch effect function, the SomeSliderAPI.setOptions method will not fire.

There’s a tiny caveat that I have not yet mentioned though, and it’s arguably one of the most important things to remember about the difference between watch and watchEffect.

watch is lazy by default. As opposed to watchEffect, watch will NOT execute the effect function as soon as the watch method declaration is reached!

In Vue 2 and in the Options API, we have the option to pass in a third param (an object with configuration options) and set the immediate: true property.

Because the watch and watchEffect methods have strong similarities (and frankly in most use cases they can be used interchangeably without issue), they can often be confused with each other. The subtlety and power provided by the control of allowing Vue to figure out the dependencies automatically with watchEffect vs watch giving us manual control over them, is definitely a differentiator worth understanding. Hopefully you now feel more clear on which methods to turn to for your unique use cases.

Originally published at https://www.vuemastery.com on June 27, 2022.

I Wrote A Lo-Fi Player, Loofi with Typescript

Want to master Vue.js? Enroll in our premium courses today.

Once suspended, vuemastery will not be able to comment or publish posts until their suspension is removed.

Once unsuspended, vuemastery will be able to comment and publish posts again.

Once unpublished, all posts by vuemastery will become hidden and only accessible to themselves.

If vuemastery is not suspended, they can still re-publish their posts from their dashboard.

Once unpublished, this post will become invisible to the public and only accessible to Vue Mastery team.

Thanks for keeping DEV Community safe. Here is what you can do to flag vuemastery:

Unflagging vuemastery will restore default visibility to their posts.