Any volumes with this tag within a region will be included in the backup plans resource assignment.

1. Backup rule
The rule says daily backup and the backup will expire after one day 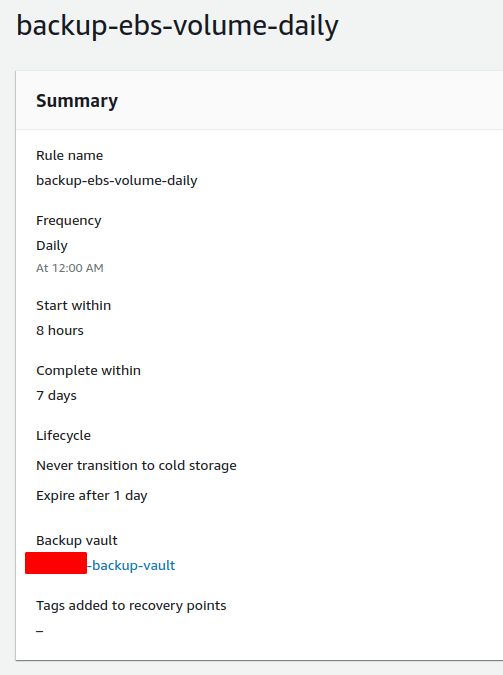 1. To get familiar with CDK, go to Your first AWS CDK app

Note: This post does not show the output of running cdk deploy because it contain AWS account information, leave comments here if there's any issue or need support

ERROR: THE ACTIVE DURATION IS TOO SHORT WHILE REMOVING ROLE ASSIGNMENT

Once suspended, vumdao will not be able to comment or publish posts until their suspension is removed.

Once unsuspended, vumdao will be able to comment and publish posts again.

Once unpublished, all posts by vumdao will become hidden and only accessible to themselves.

If vumdao is not suspended, they can still re-publish their posts from their dashboard.

Once unpublished, this post will become invisible to the public and only accessible to 🚀 Vu Dao 🚀 .

Thanks for keeping DEV Community 👩‍💻👨‍💻 safe. Here is what you can do to flag vumdao:

Unflagging vumdao will restore default visibility to their posts.