I'm learning this all as I write this, If you find any mistakes or have any suggestions and improvements, please let know in comments.

In this post, we will see how the global variables declared in a c file are converted to assembly.

For the first case we will simply declare an in and compile it to assembly : 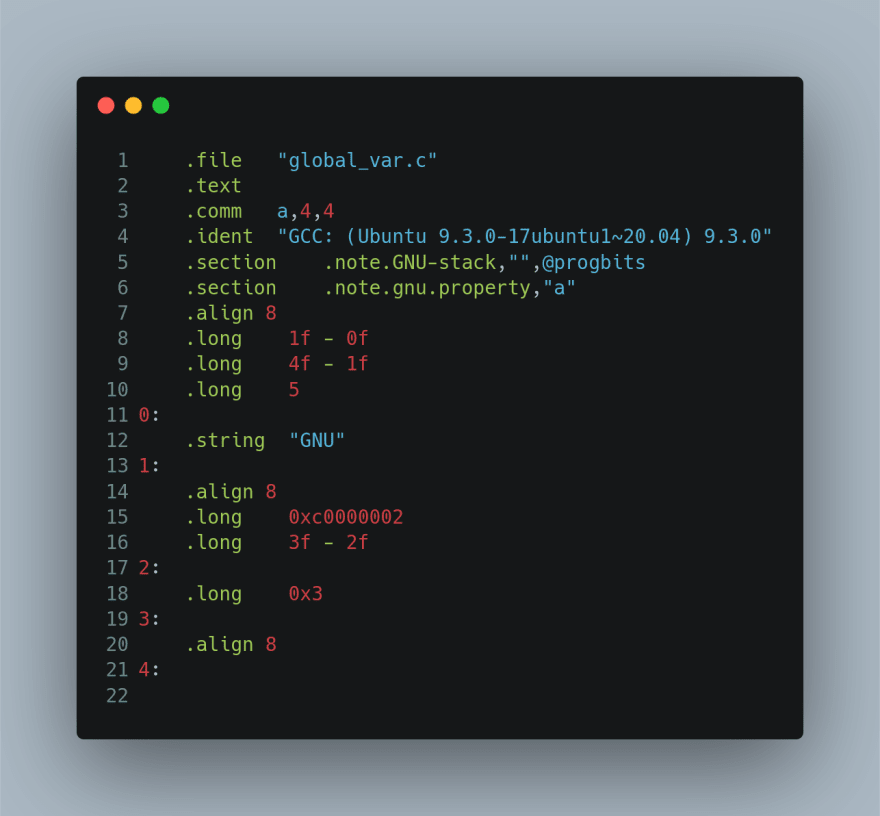 Now many of these lines are discussed in previous posts, so if you have not yer read them, I would suggest you read them before this. For the rest of this post, We will only see the lines that are different in this.

Compared to assembly file of completely empty C, this only contains one additional line :

The general syntax for comm directive is :

The .comm directive is used to declare common symbols/variables. This means that when multiple files will be linked by the linker, the variables with same name can be merged into a single. If different variables are of different sizes (say int and double) the the largest required size will be allocated for the variable. In case where there is a single definition of a variable, length bytes will be allocated for that variable.

When compiling for ELF target, (as in this case), the comm directive can take an optional third argument :

Thus in our program above,
The directive declares a symbol/variable of name a, whose length is 4 bytes, and which should be aligned on a 4-byte boundary.

The assembly changes to :

Now if we change our c to :

The assembly is changed to :

As the size of double is 8-byte.

static keyword is used to define variables/functions which are only visible inside the files in which they are defined.

The assembly generated is :

The .local directive takes list of symbol names, which will not be externally visible. As this does not support alignment, the .comm directive is used in combination to declare a local variable with desired alignment.

The corresponding assembly changes to :

Which declares an int as mentioned above, as well as a character, which is 1 byte long.

We use constants to declares variables which should not be changed after initial declaration.
If we declare a constant in c as :

We observe that the generated assembly is not any different from simply declared global int :

But if we introduce a main function and try to assign a value to it, we get an error :

Which indicates that the const property of uninitialized variables is enforced by c compiler on c-to-assembly stage, and the assembler does not know anything about it.

Pointers are used to store memory address of some other variables, which themselves can be normal variables or pointer variables. As these has to store address, they must be as long as size of address accessible on machine. For a 64 bit system, it is 8 bytes, and thus pointer to any variable is 8 bytes long.

Static and const pointer variables are treated similar to normal variables, except size which is 8 for all, and similarly in arrays, the size of each element is set as 8 bytes.

This is how uninitialized global variables are translated from c to assembly.

Again,I'm learning this all as I write this, If you find any mistakes or have any suggestions and improvements, please let know in comments.