Hello!
This is the second post in the series where we will start looking at the compiled assembly code. In case you have not read 1st post, I'd suggest to read that as it explains basic stuff like stack, heap, registers etc.

I'm learning this all as I write this, If you find any mistakes or have any suggestions and improvements, please let know in comments.

That said, let's see the first C program compiled to assembly code. Taking the quote 'Best code written is no code written' a bit too literally, we will see assembly generated after compiling a completely empty C source file. If we try to compile this to a binary, we will get an error from linker, saying something like

as we need a starting point for execution, which is provided by main function in C. Then why are we using this as first example? So that we can see what bare minimum things would be included in all assembly files, and this should give us a nice starting point.

about Syntax, A word

After giving the an assembly file to an assembler, it converts the text code (known as opcode or mnemonics) to binary. Now the processor itself only understands binary, So as long as the binary code corresponding to the instruction is given correctly, it does not matter how the assembly was written. Due to this there are two main syntax, that are generally used when writing assembly

There are several difference to note in these :

With this I think the Intel syntax can be easy to understand, but gcc by default uses AT & T Syntax (can be changed by passing -masm=intel to gcc. This Changes the syntax and adds an assembler directive .intel_syntax noprefix to generated file.) I have not yet decided which to use for these posts, so for the rest of posts, I will state which syntax is being used at the start of the post.

So now, without further ado, this is the assembly file generated by compiling an empty C file. 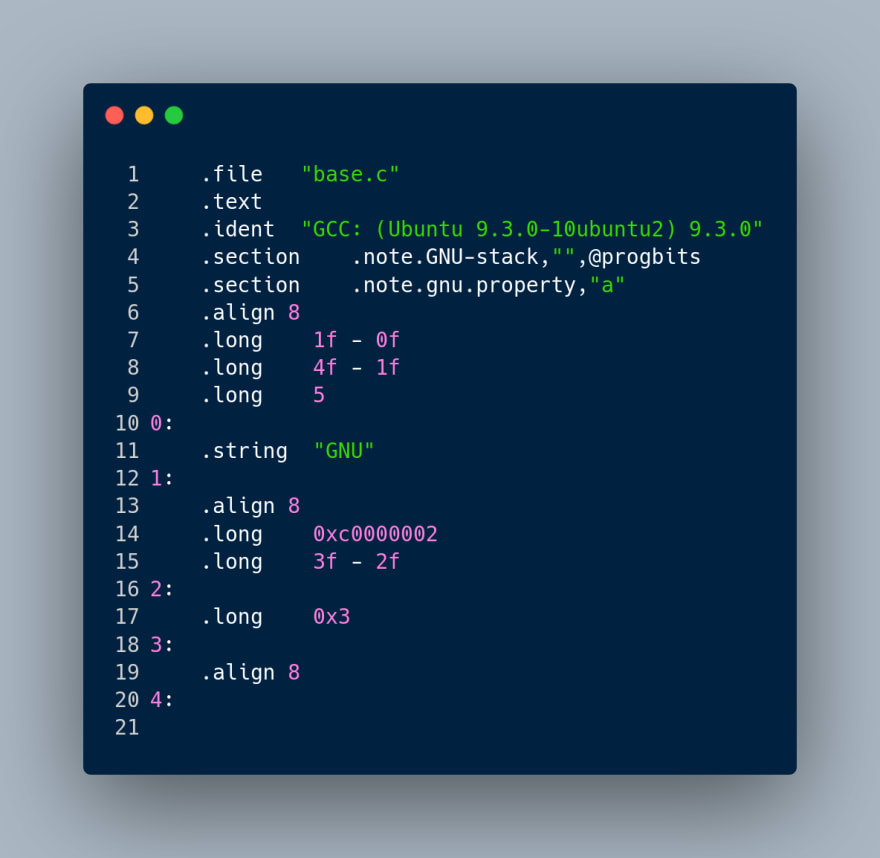 In the above snippet, there are some instructions that start with a '.', like '.file' , '.text' etc. These instructions are called as assembler directives. These do not actually compile to binary, but instead are there to help assembler for various purposes.
Additionally, there are also labels which can start with a '.',such as '.LBF0' that you can see in header. There is no label that starts with a '.' in the above example, but the number 0,1,2,3,4 followed by ':' are labels, too. Labels are used to reference various points in the assembly file. A label will refer to the immediate next instruction.

Let's look at this line by line :

aptly named, this is an assembler directive which shows the start of a logical file. This shows from which C file this asm file was compiled and can be used for debugging info.

This assembler directive shows that the following lines contain the executable code. Even though the name is text, it actually refers to executable instructions. After searching a bit I found this stack overflow question that might answer why it is called so :

Traditional assembler, and higher level compilers work with several memory segments, according to intended use. Hence, there is a data segment, a stack segment, a bss, and text segment. The text segment is also called the code segment.

I have asked all the…

.ident puts the following data in the comment section of the generated binary file, which can be used to recognize the compiler etc. used to compile to the binary.

the .section directive is used to put the following code/data into the sectioned named as given.
The @progbits denotes that the section will be stored on disk only, and not loaded at runtime, so it will contain extra information.
As per this wikipedia page, the .note.GNU-stack is used to disable the executable stack option.In past Linux supported execution on stack, which led to security vulnerabilities, and this section instructs linker that the stack should not have execution permissions.
Now I searched what the properties section is used for, but I have still not found a great explanation for this. At most I think it is used to define properties of the binary file that will be generated, but do not know why the "a" is there.

This is used so that the next instruction would be stored in a location that is a multiple of 8. The reason for this is on many CPUs fetching of data from certain location addresses is faster compared to other locations,hence this is used to improve the performance of the code.

The .long instruction puts the value of the following expression(s) in the place.These would place 10H, 30H and 5H respectively. I initially did not know why these are used, but after searching a lot, and finding this from which I got the start and then looking at gcc source, I found out that these are related to the name field and description/data field:

Each note is followed by the name field,and then by the descriptor field

from manpage of elf
as the section name ".note.GNU-stack" is 15 character long, and accounting for one 0 byte, This is set to 16 (1f-0f).
The next is length of descriptor field in bytes, which is set to 30H.Last part is type of note,the 5 is value which corresponds to NT_GNU_PROPERTY_TYPE_0.

And this concludes the first assembly file, compiled from empty C file.

This was a long post, but I wanted to explain things in a bit detail.Even though I couldn't find explanation to all things, I had fun learning about the details that I did found, and hope you enjoyed this as well.

Again,I'm learning this all as I write this, If you find any mistakes or have any suggestions and improvements, please let know in comments.

NOTE :
An explanation of GNU Assembler syntax can be found here.

Selection and Iteration in C