GC (generational garbage collector) is a garbage collector, it was created primarily to detect and delete cyclic references. gc is a built-in python module and, if necessary, it can be turned off and run manually (or not run). To understand why GC was created, you need to understand how the memory manager works in Python and how this memory is released.

Unlike other popular languages, Python does not release all memory back to the operating system as soon as it deletes an object. Instead, it uses an additional memory manager designed for small objects (whose size is less than 512 bytes). To work with such objects, it allocates large blocks of memory, in which many small objects will be stored in the future.

As soon as one of the small objects is deleted - the memory from under it does not pass to the operating system, Python leaves it for new objects with the same size. If there are no objects left in one of the allocated memory blocks, Python can release it to the operating system. As a rule, the release of blocks happens when the script creates a lot of temporary objects. 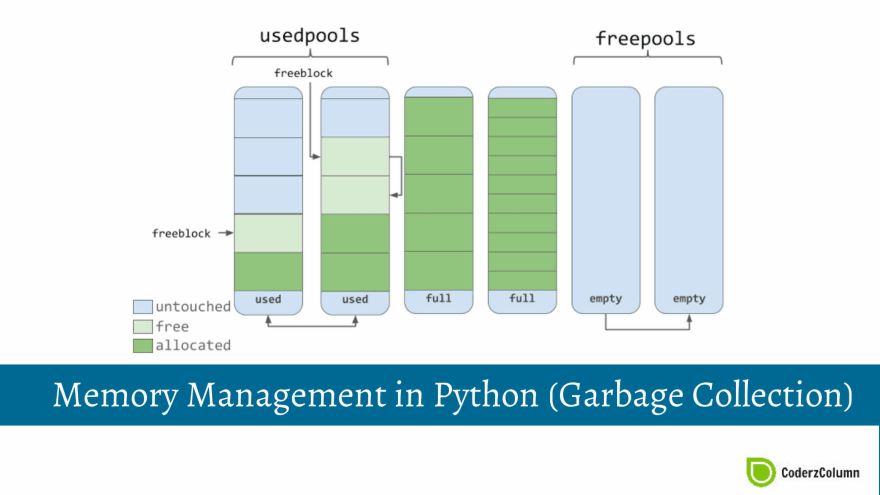 Thus, if a long-lived Python process starts consuming more memory over time, it does not mean at all that there is a memory leak problem in your code.

The link counting algorithm is very simple and efficient, but it has one big drawback. It does not know how to define cyclic references. It is because of this that there is an additional collector in python, called generational GC, which monitors objects with potential cyclic references.

In Python, the reference counting algorithm is fundamental and cannot be disabled, whereas GC is optional and can be disabled.

Each generation has a special counter and a trigger threshold, upon reaching which the garbage collection process is triggered. Each counter stores the number of allocations minus the number of deallocations in this generation. As soon as a container object is created in Python, it checks these counters. If the conditions are triggered, the garbage collection process begins.

The standard trigger thresholds for generations are set to 700, 10 and 10 respectively, but you can always change them using the

Write in private messages, in comments, on social networks. I will always try to help everyone

Once suspended, abstract will not be able to comment or publish posts until their suspension is removed.

Once unsuspended, abstract will be able to comment and publish posts again.

Once unpublished, all posts by abstract will become hidden and only accessible to themselves.

If abstract is not suspended, they can still re-publish their posts from their dashboard.

Once unpublished, this post will become invisible to the public and only accessible to Vadim Kolobanov.

Thanks for keeping DEV Community 👩‍💻👨‍💻 safe. Here is what you can do to flag abstract:

Unflagging abstract will restore default visibility to their posts.