In this post, we will see how to setup GitHub Actions to build and test React Applications

GitHub Actions helps developer automate tasks with in the software development lifecycle. These actions are event-driven, for example, when someone creates a pull request for repository, the developer can run a command to run unit tests.

A Git Workflow is a configurable automated process that can run one or more jobs.

GitHub provides a way to setup one or more workflows per project.

Where can I use multiple workflows ?

Following are some examples I can think of

In one of my projects, I wrote the REST API in dotnet where as the integration tests were written in python.

Setting up a workflow

In this section, we will setup an npm workflow for our react project.

To setup a workflow 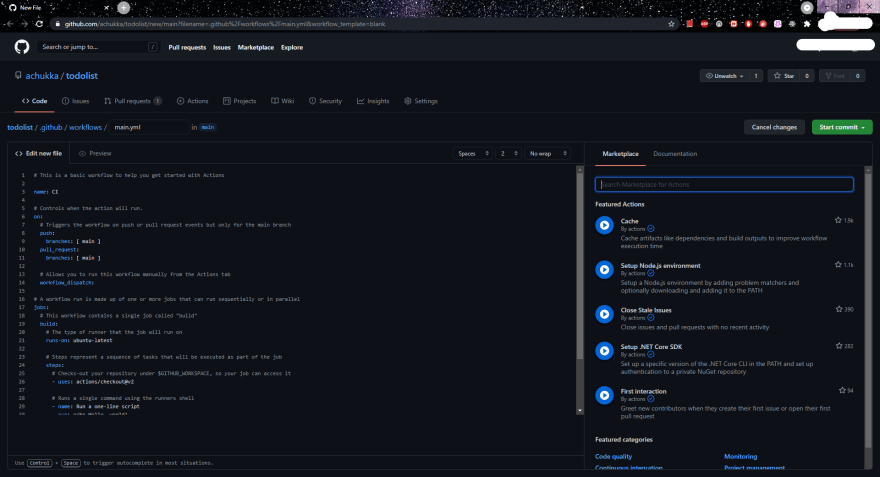 The default workflow already configures most of the variables for us

Now let's update the workflow to work with react app

In the steps block we can specify what commands (step) we can run. But before that we need to specify the version of node to be used

npm ci is similar to npm install except that it can be used while testing, continuous integration and deployment. However it needs package-lock.json or npm-shrinkwrap.json.
You find more details in npm docs

Stitching all the commands together our build_test_react.yml would look like this

Please refer to this commit for the full yml file.

Congratulations 👏. You have now setup a workflow to build and test your react application 👍

Any subsequent updates (pull_requests or push) to your github repo should trigger the above workflow.

Thanks for reading through the entire article. Please reach out with questions, comments and/or feedback.

How to Detect a Click Outside a React Component?

Once suspended, achukka will not be able to comment or publish posts until their suspension is removed.

Once unsuspended, achukka will be able to comment and publish posts again.

Once unpublished, all posts by achukka will become hidden and only accessible to themselves.

If achukka is not suspended, they can still re-publish their posts from their dashboard.

Once unpublished, this post will become invisible to the public and only accessible to Aditya Chukka.

Thanks for keeping DEV Community safe. Here is what you can do to flag achukka:

Unflagging achukka will restore default visibility to their posts.