I recently went through the struggle of setting up a pipeline for deploying a dockerized react app to Beanstalk and the whole process has left me with a new found respect for the magicians we sometimes take for granted, dev-ops engineers.

In this article I will go over the process I used to deploy a Docker image to beanstalk using Docker Hub for hosting the image and GitHub Actions for building and orchestrating the whole process. In my journey I discovered that there are multiple ways of achieving this and there really isn't a "best" approach for all use cases. However, my familiarity with beanstalk and fear of getting started with a new technology like ECS was the main motivation behind using this approach. So if you're anything like me keep reading.

I have broken the whole process into smaller, independent (somewhat) steps that give a clear, high-level picture of the entire pipeline from setting up Docker to having the image running on Beanstalk. 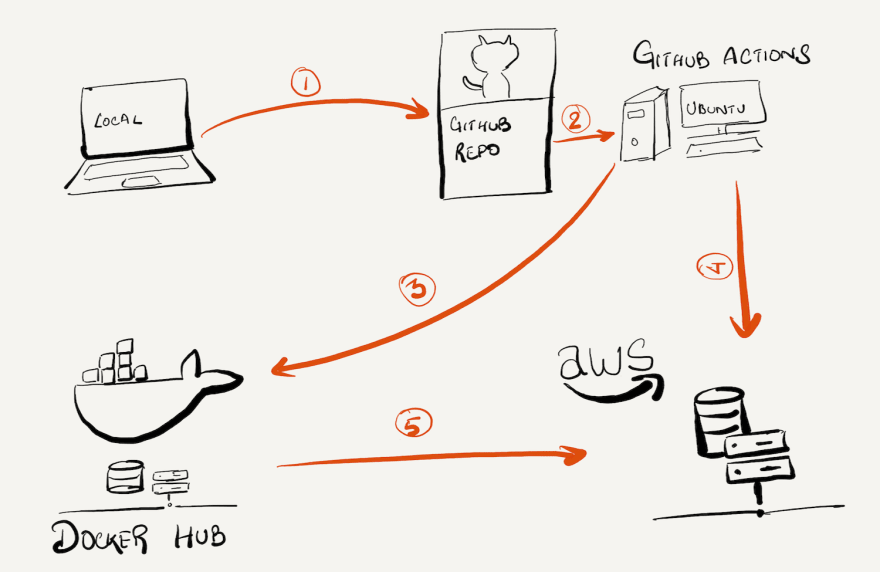 Let's sign up for all the services that we'll need for this setup.

Why use Docker? Good question. In my opinion it's the closest you can be to sharing a single "machine" for development with your all your peers. If this answer doesn't appeal to you then I sincerely urge you to read more on this topic as there are plenty of articles written by more qualified developers talking about why you should use Docker and how it can make your life easier.

Now that you're convinced, let's go over the docker configurations. For the purpose of this article, I'm going to assume that you already have a basic react (or any other) application set up with docker that you can start by building the image and running the container. If you don't have it set up then you can start with create-react-app and then add docker manually or clone a boilerplate like this one.

Here's what the Dockerfile for my react application looks like:

Now that you have a dockerized application, let's create docker configurations for production server which uses nginx reverse-proxy web server (I named it Dockerfile.prod).

Note: If you're not sure why we use nginx, then I highly recommend reading more about it.

This basically creates an image for my application and runs the build application script. It then copies the files generated by the build script (npm run build) to the nginx image under the /usr/share/nginx/html location, exposes port 80 and starts the server.

Here's an optional docker-compose file that I use along with the Dockerfile to build & test build script code in local. I use it by running docker compose -f docker-compose.prod.yml up --build and then going to localhost:80 in my browser.
You don't need this in order to continue with this tutorial.

Now let's set up Github Actions to build the production docker image whenever you push code to a branch and then deploy that image to Docker Hub. I'm assuming that you have already set up a github account and are able to push code to your repo. If you haven't done that yet, then you should stop here, create a github account, push your code to a new repo and then come back.

Github Actions works by reading a .github/workflows/.yml file in your codebase for instructions. It uses the basic YAML syntax which is human friendly and should be fairly easy to get follow. Let's create this YAML file from Github's UI and add some basic steps.

We're going to add the following content to the file:

Here we're setting the name of the action which you can see on line 1. Then we say that on push event on main branch we're going to run the jobs defined below. Next we define the deploy job which runs on ubuntu-latest machine. Then we define the follwing steps:

Now that we have added these steps to the main.yml file, let's commit the changes and go back to our local machine and pull the latest.

Now let's create the secrets in our Github repo.

Use the same process to add the DOCKERHUB_PASSWORD secret.

Now that we have everything set up, let's make some minor code changes in the main branch and push. Once you do, you should be able to navigate to the actions tab on Github and see the deploy action running. It should look something like this.

Once the action is complete, open your Docker Hub account and make sure that the image was pushed succesfully.

In this section we're going to set up AWS to deploy the Docker Hub image to Elastic Beanstalk and have our application available on the world wide web! We'll achieve this by sending instructions to beanstalk from Github Actions to pull and run the image from Docker Hub.

Before getting started, you should complete creating an account on AWS and then setting up payments, etc. to be able to create a Beanstalk application.

Follow these steps to create an IAM user with programatic access that we'll use to deploy packages to our Beanstalk application from Github Actions: 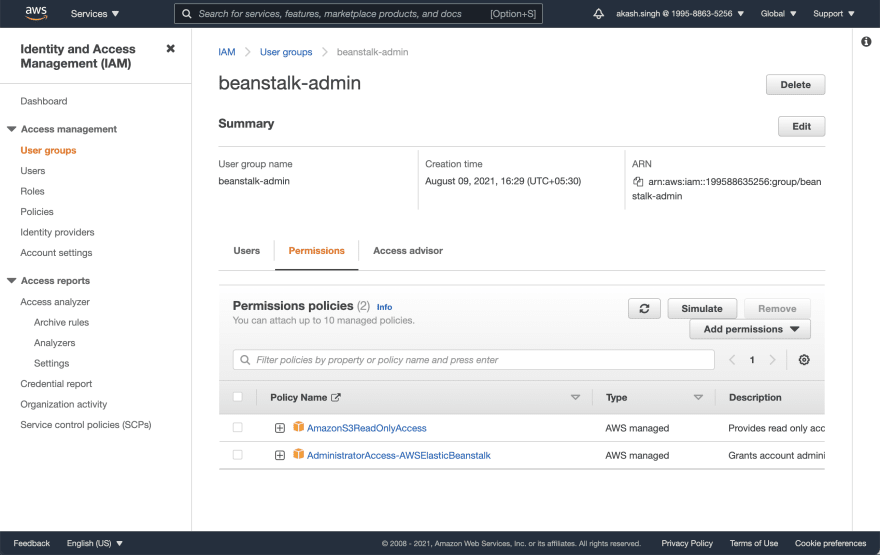 Ignore the other permission for now.

Let's create a new Beanstalk application that we'll deploy to. Navigate to Elastic Beanstalk, click Create Application, name the application, and then set the platform as Docker and leave everything else as default.

Now that we have everything set up on AWS, let's create the instructions file that will tell beanstalk to pull & run the right image from Docker Hub.

Beanstalk can work with docker-compose or Dockerrun.aws.json for getting instructions on what image to deploy but to keep things simple and set us up for the last step of this pipeline we're going to be using the Dockerrun.aws.json file. You should create this file at the root of your project folder.

Here we're telling beanstalk to pull /:latest image and then expose PORT 80 of the container.

Now that you have added the secrets to the Github repo, go ahead and commit & push the updated main.yml and the newly added Dockerrun.aws.json files. This should start a new deploy job under the Actions tab with the commit message as the title. Expand the job to make sure that you see the new steps that you added to your main.yml file.

Once the job completes, and if everything goes well, you should have your application deployed successfully in beanstalk and you should be able to access it by going to the beanstalk instance's public URL.
Note: If some thing breaks on AWS and you see the health of you application is red, then go to the Logs tab and download full logs. Unzip the package and look at eb-engine.log file. You should be able to find what went wrong by searching for the [ERROR] line in there. 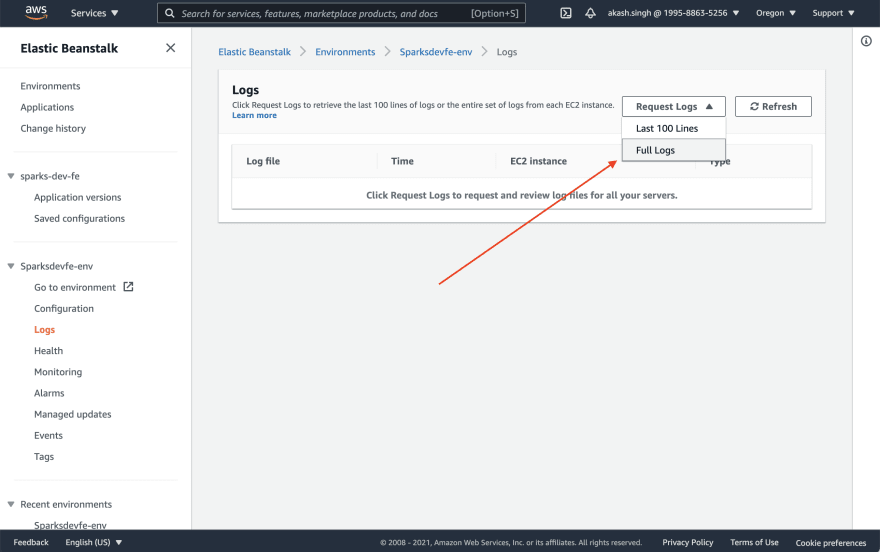 Now let's talk about how we can make our Docker Hub repository private. So far our application was publicly available on Docker, meaning that anybody will be able to find and pull this image from Docker Hub. In this section we'll go over making the Docker repo private and authorizing our beanstalk instance to be able to pull the image from Docker Hub.
I struggled a bit with this part due to outdated documentation on Amazon's site and not having any recent answers from the community on Stackoverflow.

Here's basically what we need to do:

This is pretty straight forward. You go to Docker Hub, then find the repository, go to settings and make it private. Docker gives you 1 free private repository with each Docker Hub account.

Getting the Authorization Token and Saving in a File

We'll call this file dockercfg because that is what the documentaiton keeps calling it but feel free to name it anything you want, like my-nightmare-file. This is what the contents of the file should look like:

Now the easiest way to create this file is by running the command docker login in your terminal and then copying the auths object from config.json file stored in ~/.docker/ folder (Windows folk, please Google the location). Now the problem here is that on macOS you'll see something like this:

This is because docker is using your keychain api to securely store the auth token instead of writing it to a file. Which is great, until you need the token. But thanks to the power of Stackoverflow, I learned that you can generate the authorization string by running this in your terminal:

Once you have this, create the dockercfg file as above (with the auth token) and save it on your computer. We're going to update some AWS configurations and upload it to S3 next.

To add permission to our user, go to IAM then go to user groups, select the beanstalk-admin group and add the AmazonS3ReadOnlyAccess permission. 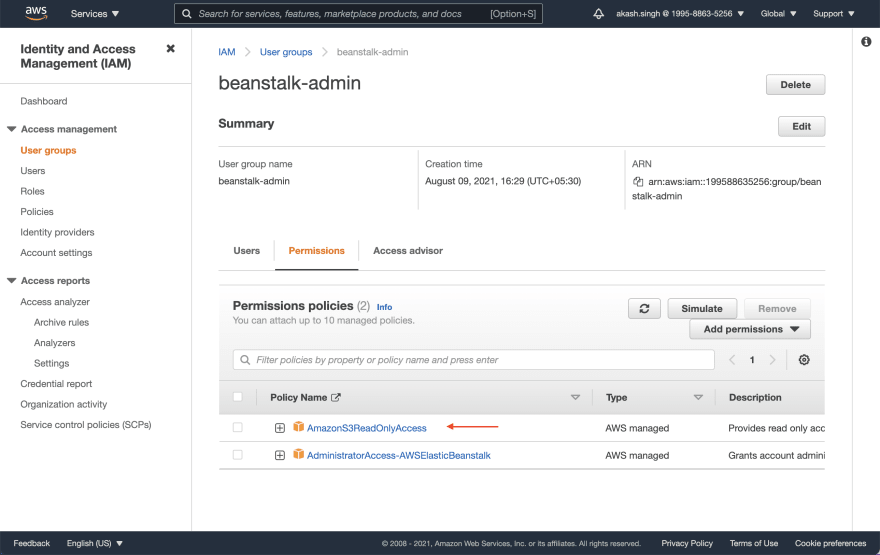 Now let's go to S3 and create a new bucket. We'll call it docker-login-bucket but you can call it anything you like. Make sure you uncheck the Block all public traffic option. Once the bucket is created we'll upload the dockercfg file which we created in the previous step. On the Upload page, after you select the file expand the Permissions section and select Specify Individual ACL Permissions and after that enable both Read access for the third option, Authenticated User Groups. This will allow our beanstalk user to read the contents of this file.

Now we need to tell beanstalk that our Docker repository is private and point it to the dockercfg file so that it can use the authorization token when pulling the image from Docker Hub.

We'll add an authentication object to the Dockerrun.aws.json file which will point to the dockercfg file in S3.

After adding this, the Dockerrun.aws.json file should look like this

Now that we've updated the Dockerrun.aws.json file, let's push the code Github and check the new deploy action that gets created. If everything was set up correctly then the pipeline should complete successfully and you should be able to see your application running on the beanstalk application URL.

Congratulations! You have successfully set up a pipeline to build a Docker image using Github Actions, store it in a private repository on Docker Hub and then deployed it on an AWS Elastic Beanstalk application. Every push to the main branch should now successfully deploy your code. 🎉

If you want to use docker-compose.yml instead of Dockerrun.aws.json for deploying then follow the steps provided here.

GitHub open source projects you can contribute to for Hacktoberfest

Akash Singh
I try to write code and sometimes it works
10+ Must-have VSCode Extensions for React Developers
#react #javascript #webdev #beginners
October 22nd, 2021: What did you learn this week?
#weeklylearn #discuss #weeklyretro
Tools That Have Made React Documentation A Piece of Cake
#javascript #react #reactnative #webdev