According to Wikipedia Routing in layman's language is -
"... the process of selecting a path for traffic …".
If we talk in Angular context, in a large application there will be multiple components combined together to form a feature (e.g. login, dashboard, user profile etc.). But we cannot show all the feature to the user at the same time. Depending on a particular case we will be displaying a specific feature to the user. This process of selecting and displaying a specific feature for a specific path is known as routing. Angular implements routing using a separate module called RoutingModule. So lets quickly dive into how we can set up angular routing in our project.

You would be prompted with a question like below -

You can opt for no by typing in N, as we are learning how to setup Routing from scratch. :P and complete the installation process.
Once the setup is done open the code folder in your favorite code editor. I have chosen VS Code. It would look something like below - 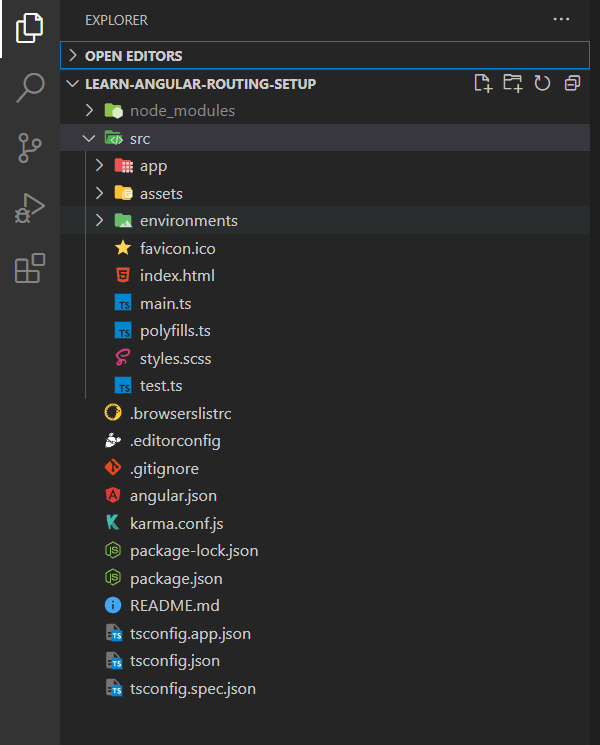 Now under _src _> _app _folder we start our real work.

Step 4 - Setting up the routing module

So, now lets understand the above code piece by piece.

a. We are declaring and exporting a class AppRoutingModule.
b. Decorating the class with NgModule decorator
c. Declaring a constant routes array. It contains all the various routes you need in your application. Every route object will contain primarily two items (I would say as of now)
i. path-to be displayed in the url of the browser
ii. component-the component to be displayed when the URL is hit
d. In the import array of the NgModule decorator we pass the routes we declared in the step c using
RouterModule.forRoot(routes)
e. In the exports array we pass the RouterModule so that it can be consumed/ imported by the appModule

Step 4 - Add the router module in the application module
Next we open the app.module.ts file and import the Routing Module we created just now. 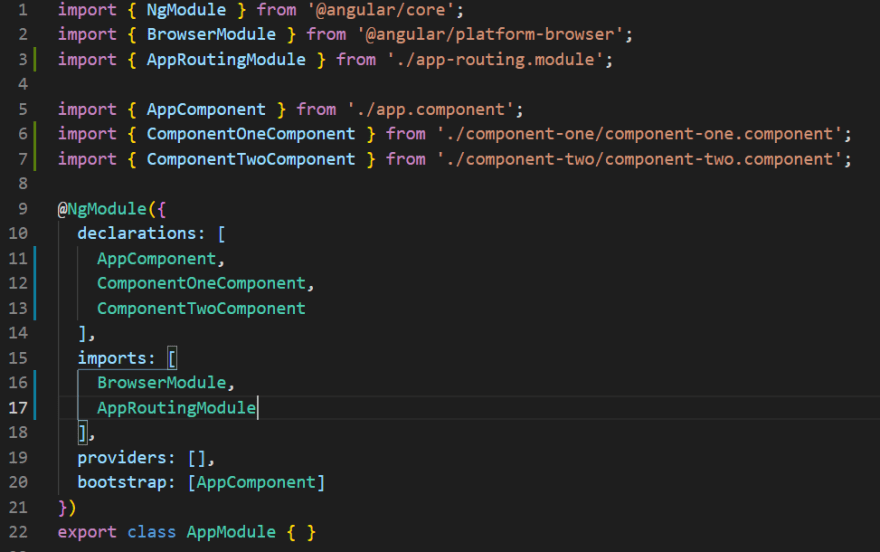 & that's it. We are done!!!
Now let's start the application by using npm start. By default the application will open in localhost port 4200. So open your favorite browser and type in http://localhost:4200/one
You will see the below output -

and when you navigate to http://localhost:4200/two the below output - 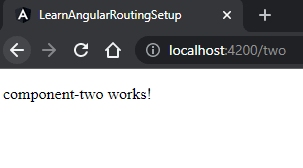 So you have successfully setup your routing.

Once suspended, anubhab5 will not be able to comment or publish posts until their suspension is removed.

Once unsuspended, anubhab5 will be able to comment and publish posts again.

Once unpublished, all posts by anubhab5 will become hidden and only accessible to themselves.

If anubhab5 is not suspended, they can still re-publish their posts from their dashboard.

Thanks for keeping DEV Community 👩‍💻👨‍💻 safe. Here is what you can do to flag anubhab5:

Unflagging anubhab5 will restore default visibility to their posts.