You can use JavaScript modules in node today without transpiling, just npm -S esm and run your app with node -r esm foo.js. add "esm": "auto" to the top level of your package.json to make loading modules and cjs in the same app effortless and transparent.

If you've stuck around this far, keep reading for an opinionated history of how we've come to this point.

The History
Transpiling
The Problem
esm: A Better Solution

Historically, JavaScript was browser-only. Developers used a number of techniques to structure their code, all of which were basically abstractions over global variables. Among those solutions, a crowd-favourite called CommonJS (or 'cjs') emerged.

CJS gained traction among JS developers mostly because it was the module system that NodeJS used. Front-end developers could bundle cjs-based apps with tools like webpack into single-file scripts that browsers could load and run.

The notion that one codebase could (with a certain amount of tool-wrangling) run on the server as well as the client lead to things like server-side rendering, NativeScript/React Native and the proliferation of tools like webpack, babel, and others as non-negotiable prerequisites to JS development.

In 2015, ECMAScript version 6 was published, which included a syntax for language-level modules.

These modules were static and top-level-only, meaning you couldn't do things like the following.

Which CJS users had become used to. On the other hand, js modules were statically analyzable, meaning that a new breed of tools like Rollup could analyze the js files to do useful things like tree-shaking, which is a process that removes unused code from bundles. This helped developers to ship less code which made sites load faster for users.

Side note: a proposal for dynamically imported modules has made it to stage 3 and is already available in a number of browsers

The specifics of how modules would be loaded and module graphs (logical structures representing the functional relationship between modules) were left to implementers, i.e. browser vendors and the node maintainers.

Browser vendors took the lead and wrote up the loader specification, but the situation for node, which already had a module system, was more complex, and as of today, no final plan has emerged, although they are close.

When the ES2015 spec (then called ES6 or "harmony") was published, a project called 5-to-6, later renamed Babel, came along as a way to let JS programmers write their apps using the awesome new ES6 features, while shipping code that older browsers and Internet Explorer could support.

This process of translating one language or version of a language to another is called transpiling, a portmanteau of *trans*lating and com*piling.

Babel has since evolved into a sort of JavaScript Swiss army knife. It can take a variety of JavaScript versions or even separate languages entirely and whip them into code that runs in the browser.

Babel has done tremendous good for web developers. It's enabled new or proposed features to be explored en masse before they were implemented by browsers, which helped expose edge cases with those features, leading to better specifications. It also played a huge part in the sea change which web development is currently undergoing from an OOP/Proceedural paradigm to a more functional paradigm. Babel also forms the basis for a wide variety of tools and products available to web developers today...

...but it doesn't have to, and that can sometimes be a bit of a problem.

The Cost of Transpiling 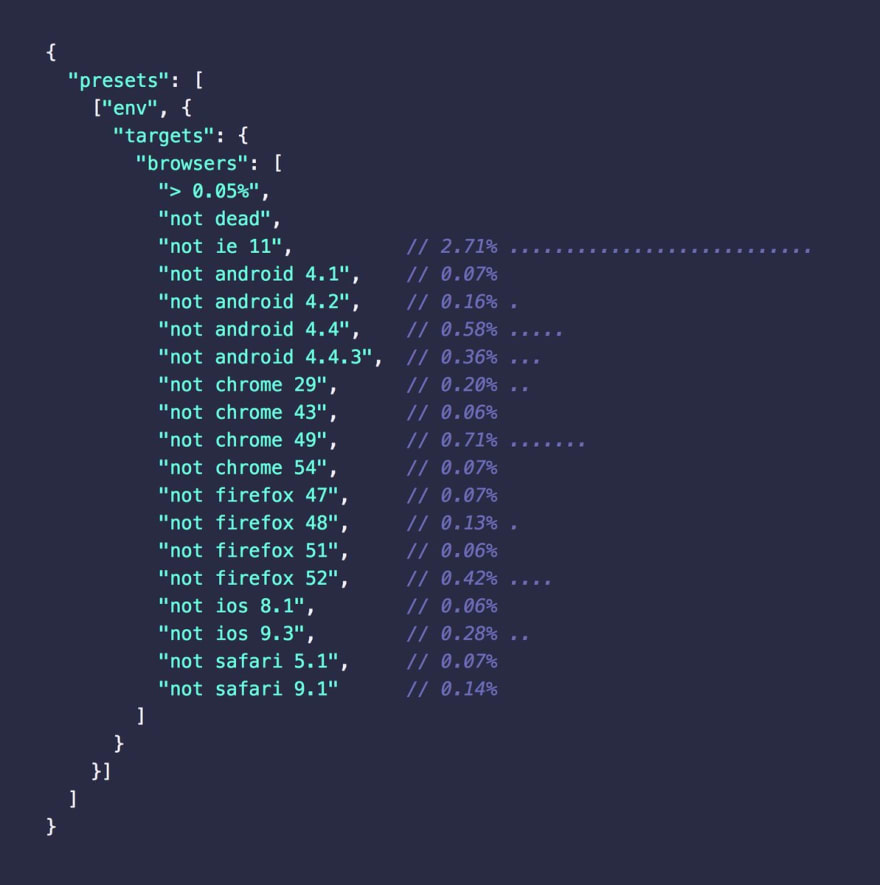 The three browsers holding JavaScript back the most are:

If we stopped supporting these browsers, we wouldn't have to transform most modern JavaScript syntax features... (cont)

The business case for delivering a large, one-size-fits all bundle to modern browsers and ie8 alike is rapidly eroding. Modern techniques like differential serving let us serve optimized, slimmed-down ES2018 to capable browsers, while reserving bloated, transpiled bundles for those less-so. Beyond that, for apps where IE11 support is not an absolute business necessity, it would actually be irresponsible to support that old, insecure browser, when users can and should be using the latest and greatest.

In the node world, transpiling comes with its costs as well. Maintaining a babel configuration isn't always the simplest task. More than that, though, transpiling subtly communicates that "this code isn't ok by itself, it needs extra processing to be OK", and we shouldn't want to say that about native modules, even if CJS had a head start.

esm is an excellent package by Microsoft developer John-David Dalton of lodash fame, et al. It's a module loader that transforms es modules at run time instead of transpiling them.

With esm, the elusive 'interop' Just Works™. You can mix and match native and CJS modules without batting an eye.

You can even use most command line node apps! For example, the excellent tape testing library doesn't come with module support out of the box, but you can easily add it like so:

Next time you have a node.js project, before you start writing a babel config just to transpile modules, give esm a try.

Once suspended, bennypowers will not be able to comment or publish posts until their suspension is removed.

Once unsuspended, bennypowers will be able to comment and publish posts again.

Once unpublished, all posts by bennypowers will become hidden and only accessible to themselves.

If bennypowers is not suspended, they can still re-publish their posts from their dashboard.

Once unpublished, this post will become invisible to the public and only accessible to Benny Powers 🇮🇱🇨🇦.

Thanks for keeping DEV Community safe. Here is what you can do to flag bennypowers:

Unflagging bennypowers will restore default visibility to their posts.