In this post, I'll illustrate how my team and I were able to leverage the strengths of two different technologies that aren't generally used together in order to develop one kick ass software solution...

You see, in our industry, the antagonization of competing technologies is quite common and one has to look no further than the common serialization formats of XML and JSON to see a good example of it.

So.... a few months ago I started working on a fairly large middleware project in which the basic idea was to receive an XML data payload from an external system, parse it, apply business logic, and then create new objects which would then be serialized into XML messages to be consumed by an internal system API. Like this:

As with most projects, the requirements for this project evolved and we were able to make our product incredibly richer by leveraging the strengths of XML and JSON.

How so, you ask? Well, we realized that we could derive a substantial amount of value for our users if we included a UI in which a user could review the data model, prior the ultimate XML serialization into our internal system's API. Furthermore, we realized that we could use the awesome power of Angular binding in order to quickly develop a modern UI, but the problem was that the data formats we were working with were XML. Therefore, we came up with the idea of parsing the initial XML payload into a C# data model that we could then serialize into JSON (quickly done with Json.NET ;-D), store it in our database, and then have an Angular UI bind it from that database for user review. Once the user did their necessary modifications on the UI, we could then re-serialize the revised JSON object from Angular into C# and ultimately back to XML. Like this: 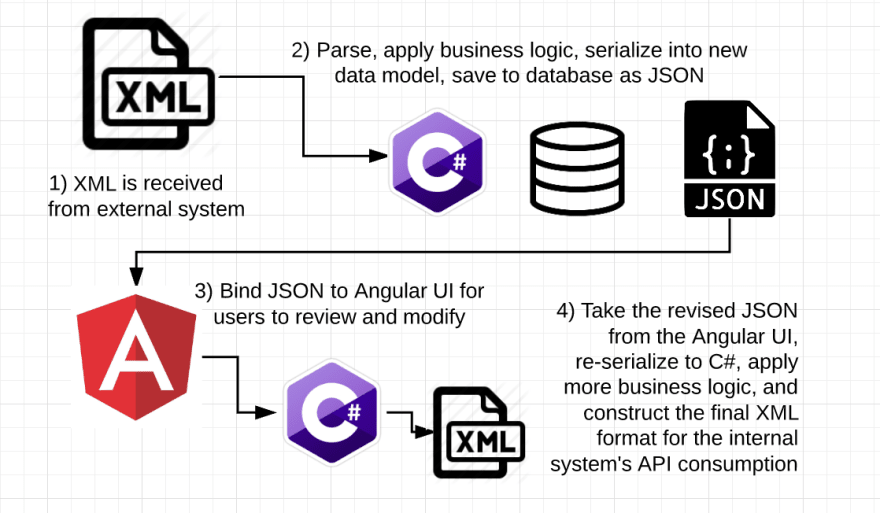 And there you have it, we were able to exceed our initial expectations and bring a modern Angular application experience to our users quickly by combining the powers of two technologies that are more often thought of as rivals than as partners.

Why You Should Learn JavaScript Principles First (Not the Hottest Frameworks)

The best front-end framework to learn in 2019