Last weekend, 60 minutes aired a segment on girls in computer science and closing the gender gap in tech — without referencing any (of the many) women-led efforts. Reshma Saujani, Founder of Girls Who Code spoke out about this in a recent blog post, and how the media tends to overlook the contribution of women in tech.

“Contrary to what was said in the program, introducing girls to computer science earlier on (i.e. kindergarten) isn’t enough to close the gender gap in tech. Girls need support systems all along the pipeline, and tech companies need to do their part to root out harassment and discrimination,” Reshma says.

For this post, I wanted to put female developers in the spotlight and highlight their experiences in the tech industry. There are many amazing role models out there making progress, big and small, that should be shared and celebrated. Let’s hear what they have to say!

Being a role model

Research done by Stanford's Computer Science department concludes the lack of role models as one of the main reasons why women no longer choose to pursue Computer Science.

Perhaps part of the issue here is visibility. Aside from Ada Lovelace, there are several notable female developers that have made a significant impact on software development as we know it today, but most developers may not have ever heard of them.

The women we spoke to also named other inspiring female developers, including Gwen Barzey (a black Toronto women who was one of the first programmers in Canada), Linda Liukas (co-founded Rails Girls and helped make programming “more approachable”), Sandi Metz (author and speaker who’s “passionate about advancing the craft of programming”). These role models are not only trailblazers who have shown that they’re integral to this field, they’re also advocates whose stories help empower others.

Whether you’re a junior or senior developer, you can inspire others even if you feel like you haven’t done something that’s unconventional. Being a guide for other women who are in, or interested in, the tech industry can make a small but significant impact.

If you’re reading this, you can still be a role model to other women, even if you’re not a developer or a women! Some developers told us that they were inspired by people like Malalal Yousafzai, Melinda (and Bill) Gates, Michelle Obama, and others. A few were also greatly inspired by the male figures in their lives, whether it's their father, spouse, peers, or colleagues in more senior roles.

Not being afraid of failure

A common challenge that's faced — one that not only resonates with women developers but also many developers who are just starting out — is the dreaded imposter syndrome, when you feel like you are undeserving of your role and have an overall lack of confidence.

As Jaime Gunther, software engineer at Envato, puts it:

When you’re a developer, particularly a junior, everyday is a huge learning experience. You are solving problems and debugging issues and it can get frustrating. In those moments of frustration it’s really easy to fall into the trap of not feeling good enough, not feeling capable etc.

Mary Kate Fain, software engineer at Promptworks, believes that "overcoming fear and self doubt is a greater challenge than learning any one programming language or skill". She believes this issue goes back even further, and cites Reshma Saujani (author and founder of Girls Who Code), who said that girls are taught to strive for perfection, rather than encouraged to be brave.

We don't learn how to deal with failure, which prevents us from tackling new challenges and leads to self handicapping. — Mary Kate Fain

The key to overcoming this, according to Jaime, is to "acknowledge the situation, take a deep breath, realise that everyone has those moments, and be kind to yourself."

Capitalizing on your strengths

Being a female developer makes you “automatically memorable”, according to Sheena, a Python mentor on Codementor. Figuring out your strengths helps you learn how you can use them to gain a higher sense of confidence and boost your career as a developer. 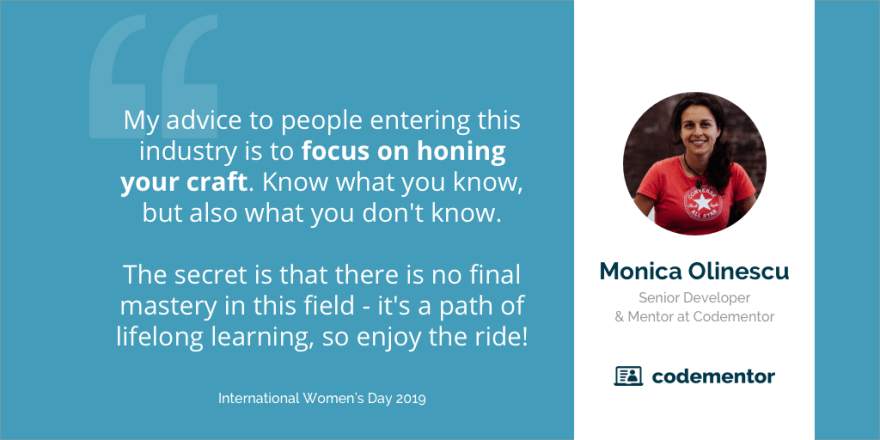 Even if you don’t have a background in tech, Jay Strawn at Utility NYC (and previously a literature major), says that “finding a way to use the skills I already had and apply them to tech really helped me learn and grow in my career.”

Most of the female developers I spoke to had mentors that played a key role in their career growth. Not all mentors did something innovative, nor were they all women.

Mentoring is often a two-way street. Mentors I’ve spoken to in the past have also learned a lot from their mentees and feel a sense of pride when they see their mentees succeed. In 2019, the rest of the Codementor team and I hope to encourage and see more women developers to be mentors in this space.

For Jessamyn Smith, being a mentor has helped put an end to her biggest challenge in the workplace. 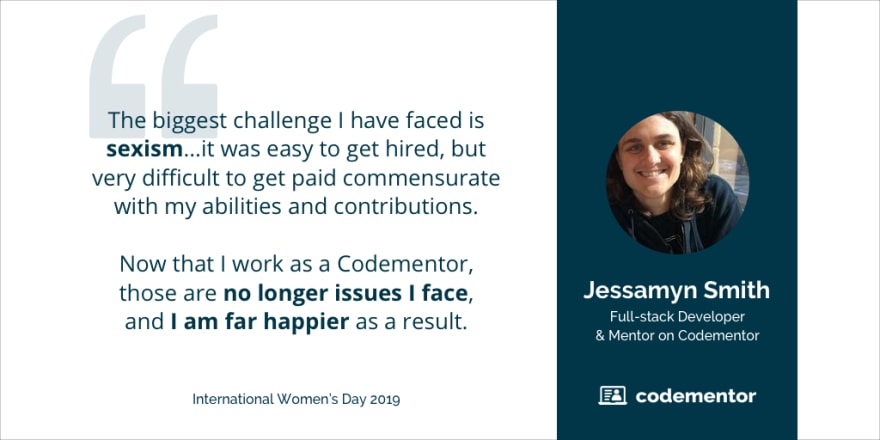 Not being afraid of asking questions

When you start your first job as a developer, sometimes you don’t really know what you’re getting into until you start being more hands on. For Jadwiga Pokorska, who was previously a software engineer at Google, the size of the organization (and similarly, their codebase) meant that she had to get comfortable with asking others for help, like where something is in the code — even if it seemed like a “stupid” question.

If you're in a project and you feel like something is not clear or not addressed completely, do speak up. More often than not, you're not the only one feeling this way and clarification will help everybody. — Karolina, Python mentor

Sylvia, Codementor team's first female developer, shared that a big challenge she faced in her first job was having to work with a development team that lacked proper software development processes and documentation, which required constantly communicating with stakeholders about requirements. This also meant having the courage to ask questions and keeping people accountable to help put an end to working inefficiently.

Belonging to a supportive community

As Mary Kate puts it:

Find your community. Having people to help me debug, show me what to learn next, teach me, inspire me, and encourage me when I'm down has made all the difference. Find out if you have a local women's tech organization, and attend all the meetups and classes you can. You'll learn skills you need, and the more importantly meet the connections that will keep you going. 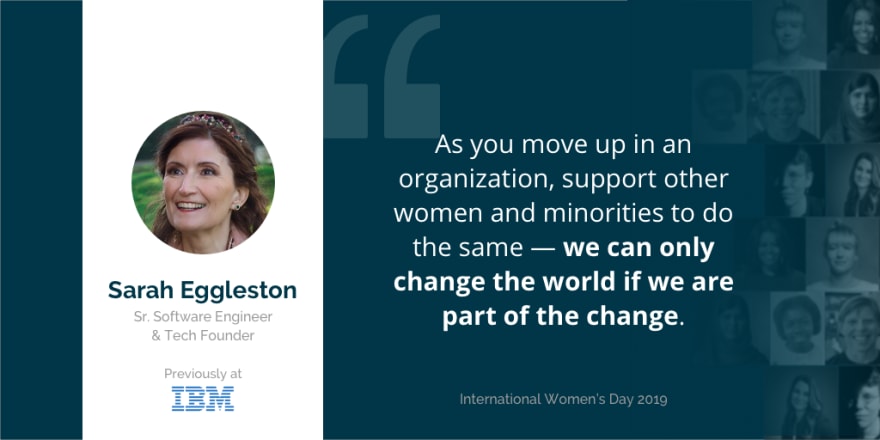 International Women’s Day should also be a time to celebrate how far we’ve come to help push us forward.

So, what’s the best part about being a women in tech? Here are some of their responses: 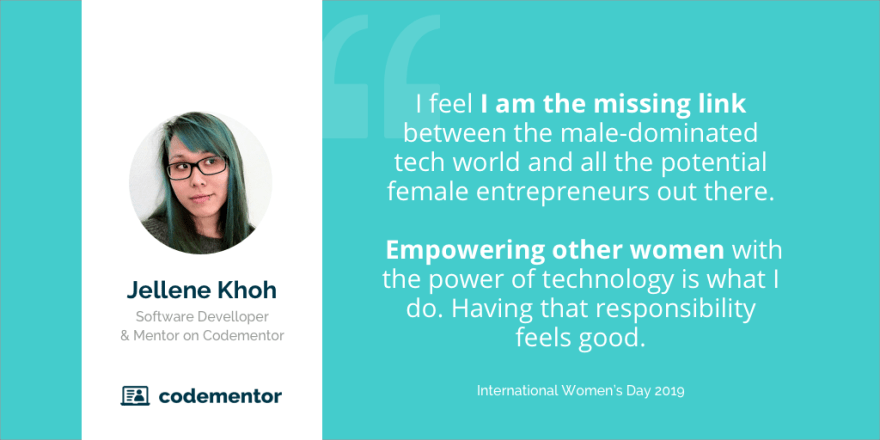 I hope this post can inspire more women — and other underrepresented groups in tech — to feel encouraged, help one another, and come together to break the mold. For those who already in tech, keep up the great work!

Lastly, a special thanks to all of the female developers who shared their experiences with me. Happy International Women's Day!

Create a culture of Psychological Safety in Engineering

Are these the RIGHT 5 skills for a Beginner Cloud Engineer?

Codementor is an on-demand marketplace for software developers. Find a mentor or hire a developer on our platform. Be a part of our community of 400,000+ developers!

Once suspended, codementor will not be able to comment or publish posts until their suspension is removed.

Once unsuspended, codementor will be able to comment and publish posts again.

Once unpublished, all posts by codementor will become hidden and only accessible to themselves.

If codementor is not suspended, they can still re-publish their posts from their dashboard.

Once unpublished, this post will become invisible to the public and only accessible to Codementor.

Thanks for keeping DEV Community 👩‍💻👨‍💻 safe. Here is what you can do to flag codementor:

Unflagging codementor will restore default visibility to their posts.