Picture this. A Car Dealership selling Cars 🚗. Suddenly, they want to branch out and sell Trucks 🚛. You had initially programmed the order and sale system to handle Cars. What do you do now? Do you duplicate the majority of the business logic in the system to also handle trucks specifically?

Sure, it's a somewhat quick win to do this. A short while later, the Dealership decides it's gonna start selling Motorbikes.

🤦 Oh no. More code duplication? What happens if the order system needs to change, do we need to update it now in three places!!?

We've all been there. It's hard to predict when this situation might occur. But when it does, know that there is a solution that initially might require a bit of refactoring but will surely mean a more maintainable solution, especially when the Dealership says it's gonna start selling Boats! 🛥️

In this article, we will discuss:

💪 A Solution - The Factory Pattern

The Factory Pattern is a creational design pattern that adds an abstraction layer over common base behaviour between multiple objects of a generic type.
The client code, the code that will use this layer, does not need to know the specifics of the implementation of the behaviour, as long as it exists.

If we take our Car Dealership turned Multi-Vehicle Dealership example above we can see that the common ground between the Cars, Trucks and Boats are that they are all Vehicles. The Order System within the Dealership only needs to work with a base Vehicle, it doesn't need to know the specifics about the Vehicle being processed.

Let's take a quick look at a UML Diagram to illustrate this: 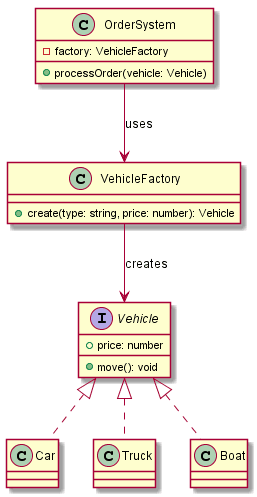 They can branch out to as many Vehicles as they like now and we only ever have to create a new implementation of the Vehicle interface and update our VehicleFactory to create it! 🔥🔥🔥

There are a few situations, other than the one describe above where this pattern fits perfectly:

🤯 Some Advantages and Disadvantages

❓ Where is it being used in the Frontend World?

Surprisingly (well maybe not), Angular allows the usage of Factories in their Module Providers. Developers can provide dependencies to modules using a factory, which is extremely useful when information required for the provider is not available until Runtime.

You can read more about them on the Angular Docs for Factory Providers.

A great example for this in the Frontend is cross-platform UIs.

Imagine having a cross platform app that shows a Dialog Box. The app itself should allow a Dialog to be rendered and hidden. The Dialog can render differently on a mobile app than it does on desktop. The functionality however, should be the same. The app can use a factory to create the correct Dialog at runtime.

For this example, we are going to use TypeScript to create two implementations of a Dialog, a MobileDialog and a DesktopDialog. The app will use the User Agent String to determine if the app is being viewed on a desktop or mobile device and will use the Factory to create the correct Dialog.

Note: Normally, it is more ideal to develop one responsive Dialog, however, this is an example to illustrate the Factory Pattern.

Let's start by creating a base Dialog Interface

There are only slight variations in this functionality, and you may argue an Abstract Class would be a better fit for this as the render and hide methods are the same. For the sake of this example, we will continue to use the Interface.

Next we want to create our Factory:

Our Factory takes a type and will subsequently create the correct implementation of the Dialog.

Finally our App needs to consume our Factory:

Looking at the code above, we can see that the App does not need to know about the Concrete Implementations, rather, that logic is the responsibility of the DialogFactory.

Hopefully, this code example has helped to clarify the Factory Pattern and it's potential usage in the Frontend World.

Personally, I understand the concept and the advantages of this Pattern, but I do not like the focus and reliance on Inheritance that it requires for it's implementation.

Feel free to discuss any other examples or your own opinions of this Pattern, as I'm still undecided on it.
If you have any questions, feel free to ask below or reach out to me on Twitter: @FerryColum.

Once suspended, coly010 will not be able to comment or publish posts until their suspension is removed.

Once unsuspended, coly010 will be able to comment and publish posts again.

Once unpublished, all posts by coly010 will become hidden and only accessible to themselves.

If coly010 is not suspended, they can still re-publish their posts from their dashboard.

Once unpublished, this post will become invisible to the public and only accessible to Colum Ferry.

Thanks for keeping DEV Community safe. Here is what you can do to flag coly010:

Unflagging coly010 will restore default visibility to their posts.