That'd sure do it. Thanks! There's a bunch of good robot vacuum commentary there, and a few people calling me an asshole for disrespecting my significant other (it was a joke, really).

DEV posts in general have an incredibly short lifetime - a few hours for most, maybe a few days if you managed to hit on something interesting. Generally, after that time, I stop seeing any new reactions entirely by the third or fourth day after posting.

This week though, I've received a flurry of activity in the form of reactions, new comments, and even direct messages to my email address, on a post I made last July: 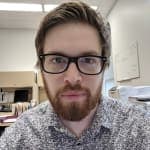 I Am Mesmerized By Our New Robotic Vacuum

How and why is that happening? Are we all just spending more time at home and deep diving through DEV links? If so, why that post in particular? Was it linked somewhere externally? Is there any way for me to tell?

It doesn't matter, really, this has just never happened to a DEV post of mine. Some of my more popular articles will get an intermittent "heart" every so often well after publishing, but this has almost felt like it's been back on the feed.

Photo by bruce mars on Unsplash

How to close the current tab in a browser window?

Pitch me on Elixir

The power of React refs

Ben Lovy
Just this guy, you know?
How many of y'all are using DEV Connect?
#watercooler #meta
You Lot Are Great
#appreciation #meta #fluff
Pink Theme > Any Other Theme
#meta