This article is for those like me who haven't done GA (Genetic Algorithms) in a while, and need a refresher on the most common parent selection, crossover, and mutation algorithms.

I am limiting myself to those available in PyGAD, a nice Python library implementing GA. The knowledge can however be applied to other libraries/custom implementations as well, so keep reading !

In a genetic algorithm, you start with an initial population of chromosomes, which are possible solutions to a given problem. Those chromosomes consists of an array of genes, that can be bits/ints/floats... You also specify a range of permissible values (e.g. integers from 0 to 9).

The whole optimisation problem is encoded into a fitness function, which receives a chromosome and returns a number that tells the fitness (or goodness) of the solution. The higher the fitness, the better the solution encoded in the chromosome.

Then starts the loop. At each iteration (generation), a number of good chromosomes are selected for breeding (parent selection). Parents are combined two-by-two (crossover) to generate new chromosomes (children). The children are finally mutated by modifying somewhat randomly part of their genes, allowing for completely new solutions to emerge. The children go to the next generation and a new iteration starts (note that in some cases, it is possible to let some parents survive, see the keep_parents=N parameter in PyGAD).

The loop is stopped after a given number of generations (=iterations), or based on a stop criteria (for example, there is no improvement for a while).

It offers an implementation of genetic algorithm (GA) that is easy to use, yet powerful and flexible.

Here is an example of use by my dear friend @supcik: 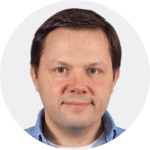 The parent_selection_type defines the selection algorithm, that is which parents will we used for reproduction. At the time of writing, PyGAD supports 6 algorithms:

Usually, the run of a genetic algorithm is divided into generations - at each generation, the result of the selection and reproduction process replaces all (or at least most) of the population; only children survive. In a steady state genetic algorithm, however, only a few individuals are replaced at a time, meaning most of the individuals will carry out to the next generation; there is no generation per se.

There are multiple implementations. For example, in one variant, parents are selected using e.g. tournament selection. Then, children and parents are compared (based on the fitness value), and only the best ones are put back in the population.

In another variant, the best chromosomes are selected for reproduction, and their offsprings will replace the worst individuals.

SSS is the only algorithm of this type offered by PyGAD at the time of writing.

RWS is a fitness proportionate selection (FPS) algorithm, one of the most popular ways of parent selection.

In this family, every individual can become a parent with a probability proportional to its fitness. Choosing an individual can be depicted as spinning a roulette that has as many pockets as there are individuals in the current generation, with sizes depending on their probability. There is thus no strong guarantee of "survival of the fittest": good candidates can be eliminated, while the worst ones may survive.

The RWS variant is the simpler: each time an parent needs to be selected, the wheel is spun, meaning an individual can be selected multiple times, and the fittest have strong bias (= a very big chance to be drawn).

SUS is another variant of fitness proportionate selection which exhibits no bias and minimal spread.

The same roulette wheel is used than in RWS, with the same proportions, but instead of using a single selection point and turning the roulette wheel again and again until all needed individuals have been selected, here all the parents are selected at once. For that, the wheel is spun only once, and multiple selection points spaced evenly around the wheel determine which individuals are drawn. 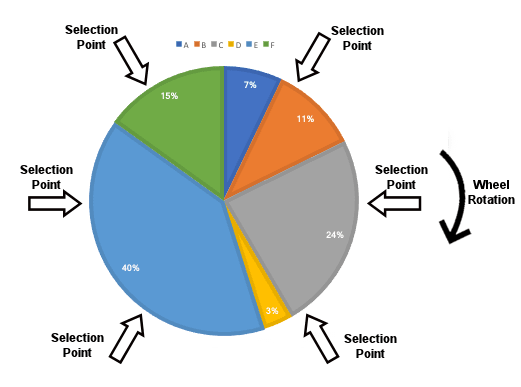 This gives weaker members of the population (according to their fitness) a chance to be chosen, and also encourages the highly fit to be chosen at least once.

The rank selection is useful when the population has very close fitness values. In this case, using a roulette wheel (RWS, SUS) would mean all individuals would basically have the same probability of being picked up... So instead, the idea is to base the probabilities not on the fitness value itself, but on the rank of the individual.

That is, we first rank the individuals from highest to lowest fitness value (i=1..N), assign the probabilities of being chosen based on sum of fitness values / i, and finally spin the wheel.
Note that this would then be a linear rank selection: the ranks are in a linear progression. There are other schemes of rank selection, for example exponential.

The name says it all: the parents are randomly selected from the population, irrelevant of their fitness.

Tournament selection works by selecting K (tournament size) individuals randomly (tournament), and pick the fittest of them (the winner) for breeding.

The selection pressure depends on K: the largest K, the stronger the pressure, as weaker individuals will have more adversaries, and thus a higher chance of losing.

In PyGAD, the tournament size is controlled by the K_tournament parameter.

The crossover_type defines how children are generated from the selected parents; in other words, how the reproduction works. At the time of writing, PyGAD supports 4 algorithms:

The breeding works by selecting an index randomly (crossover point). All genes to the right of that point are then swapped between the two parent chromosomes. This results in two offsprings, each carrying some genetic information from both parents.

In a uniform crossover, we essentially flip a coin to decide wether each gene is left untouched, or taken from the other parent. In other words, each gene is chosen from either parent with equal probability. The technique is repeated for each new child.

Note that in some variants (but not PyGAD), it is possible to bias the coin towards one parent, resulting in children inheriting more from it.

The mutation_types defines the mutation algorithm, that is which transformations are made to the children. It is possible to pass None, meaning no mutation.
At the time of writing, PyGAD supports 5 algorithms:

The actual number of mutations applied to each child is controlled by the mutation_num_genes/mutation_probability/mutation_percent_genes parameters.

Here is the gist:

Written with ♡ by derlin

I made your GENIUS app ideas!

HOW TO VALIDATE FORM IN LARAVEL 9?