Lately the emphasis on Machine Learning (ML) has shifted from pure model development to real-world production scenarios that are concerned with issues such as inference performance, scaling, load balancing, training time, reproducibility, and visibility. Those require computation power, which in the past has been a huge hindrance for machine learning developers.

The share of ML developers who write their app or project's code locally on laptop or desktop computers, has dropped from 61% to 56% between the mid and end of 2019. Although the five percentage points drop is significant, the majority of developers continue to run their code locally. Unsurprisingly, amateurs are more likely to do so than professional ML developers (65% vs 51%).

As it turns out, 19% of ML developers use multi cloud solutions (see this multi-cloud cheat sheet here) to deploy their code. It is likely that, by introducing this new option, we underestimate the real increase in public cloud usage for running code; some respondents may have selected multi cloud in place of public cloud. That said, it has become increasingly easy and inexpensive to spin up a number of instances and run ML models on rented cloud infrastructures. In fact, most of the leading cloud hosting solutions provide free Jupyter notebook environments that require no setup and run entirely in the cloud. Google Colab, for example, comes reinstalled with most of the machine learning libraries and acts as a perfect place where you can plug and play to build machine learning solutions where dependency and compute is not an issue. 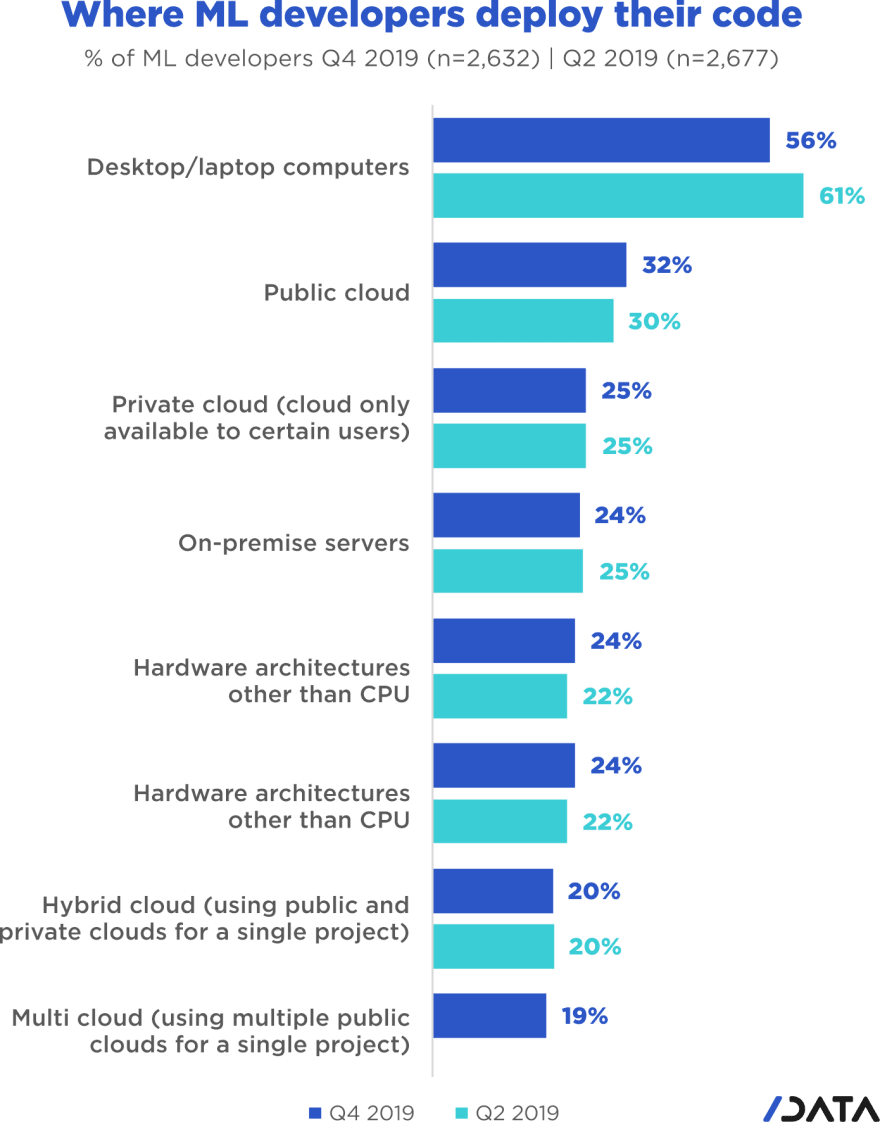 Who are the developers most likely to deploy their code on hybrid and multi clouds?

Teachers of ML/AI or data science topics are also more likely than average to use cloud solutions, more specifically hybrid or multi clouds. It should be noted that a high share of developers teaching ML/AI are also involved in a different way in data science and ML/AI. For example, 41% consume 3rd party APIs and 37% train & deploy ML algorithms in their apps or projects. They are not necessarily using hybrid and multi cloud architectures as part of their teaching activity.

The type of ML frameworks or libraries which ML developers use is another indicator of running code on cloud computing architectures. Developers who are currently using big data frameworks such as Hadoop, and particularly Apache Spark, are more likely to use public and hybrid clouds. Spark developers also make heavier use of private clouds to deploy their code (40% vs 31% of other ML developers) and on-premise servers (36% vs 30%).

Deep learning developers are more likely to run their code on cloud instances or on-premise servers than developers using other machine learning frameworks/libraries such as the popular Scikit-learn python library.

There is, however, a clear distinction between developers using Keras and TensorFlow - the popular and most accessible deep learning libraries for python - compared to those using Torch, DeepLearning4j or Caffe. The former are less likely to run their code on anything other than their laptop or desktop computers, while the latter are significantly more likely to make use of hybrid and multi clouds, on-premise servers and mainframes. These differences stem mostly from developers' experience in machine learning development; for example, only 19% of TensorFlow users have over 3 years of experience as compared to 25% and 35% of Torch and DeepLearning4j developers respectively. Torch is definitely best suited to ML developers who care about efficiency, thanks to an easy and fast scripting language, LuaJIT, and an underlying C/CUDA implementation.

Hardware architectures are used more heavily by ML developers working with speech recognition, network security, robot locomotion and bioengineering. Those developers are also more likely to use advanced algorithms such as Generative Adversarial Networks and work on large datasets, hence the need for additional computer power. Similarly, developers who are currently using C++ machine learning libraries make heavier use of hardware architectures other than CPU (38% vs 31% of other developers) and mainframes, presumably because they too care about performance.

If you are a Machine Learning programmer or Data Scientist, join our community and voice your opinion in our current survey to shape the next State of the Developer nation report.

Getting Started with Machine Learning: The Quantum Edition

Developer Nation
Our mission is to champion a global collective of software creators who are confident in their technology choices and feel included in the conversation about the future of the ecosystem.
Dev resources and articles plus news from Huawei's Android alternative HarmonyOS, Mozilla launches MDN Plus, and more.
#productivity #machinelearning #news
📚 Resource Packed Newsletter!
#resources #newsletter #opensource #machinelearning
Trends on Open-source, DevOps, ML and more
#programminglanguages #devops #opensource #machinelearning