There are some rules that guild writing code for CSS style. These rules help the browser to interpret the code and apply it to the appropriate HTML element. The CSS rule is made of three parts which include

Selector: a selector shows the HTML element you wish to style. This could be any tag like <p> or even a class name.

Property: this is like a HTML attribute. It simply that all HTML attributes are converted to CSS properties. Example color, border, height, weight etc.

Value: these are assigned to the properties example color: blue

These selects elements based on the element name. when an element is selected and a style is given to it all the content of that element takes the style on the webpage.

An id is unique in itself. The id selector is used to select this id within the webpage. No two elements can have the same id. To select a specific id, write the harsh tag character(#), followed by the id of the element.

The CSS class selector works in the same way as the id selector but with slight difference. An ID is unique to the element whereas a class can be common to multiple elements. To select a element with specific class, write a period character(.), followed by the class name.

The universal selector is just as it is called. It selects all the element in the webpage. It has the star sign (*) as its symbol

It is usually used when the same CSS styling is applied to different elements. It helps to increase efficiency and save time.

Trying to build out all user interfaces and components for your website or web app from scratch can become a very tedious task. A huge reason why we created Contrast Bootstrap to help reduce the amount of time we spend doing that, so we can focus on building some other aspects of the project. Contrast Bootstrap PRO consists of a UI Kit featuring over 10000+ component variants. Together with a template of 5 admin dashboards and 23+ additional multipurpose pages template for building almost any type of website or web app. You can view a demo and learn more about Contrast by clicking here. 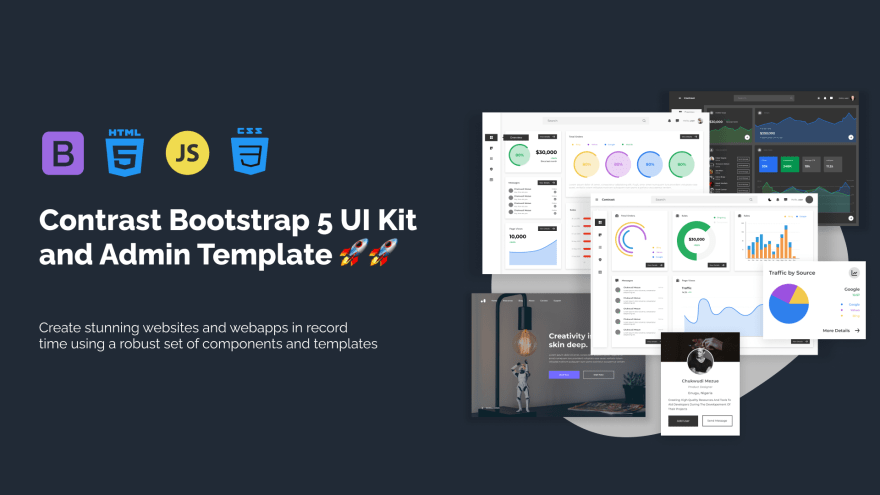 Back At One - A Chart-Topping Approach To Your Job Search

Devwares
Resources and tools to aid developers during development
Tailwind 3.0 is finally available. here are all the major Changes
#tailwindcss #webdev #css
How to create a beautiful stepper using bootstrap and Contrast
#react #webdev #programming #codenewbie
How to create a beautiful tables using bootstrap and Contrast on React.
#react #programming #webdev #codenewbie

Once unpublished, this post will become invisible to the public and only accessible to Sampson Ovuoba.

Thanks for keeping DEV Community 👩‍💻👨‍💻 safe. Here is what you can do to flag devwares:

Unflagging devwares will restore default visibility to their posts.