GitFlow is an abstract idea for managing branches using Git. It helps how branches should be created, and how to merge them. On windows, the base installation of Git comes with the command git-flow, which allows determining the flow in the repository. His only difference to git init is that he creates and delimits names for specific branches. On OSX systems, it can be installed via brew, with the brew install git-flow command.

Our team was in need to start defining some git branches patterns. I brought the idea to the table to implement the git-flow process. The people on our teams was increasing, so we would need more coordination in working together with many developers on the same project.

We should work together to implement for future process automation.

I am going to explain each part of the process. Explaining how all the parts fit together. Just to a point to consider here, this pattern, it's just a conventional, you might find a better way to your team, so, you can break the rules!

The combination of the two branches allows you to maintain a version history. The main is the production branch, and where version tags are launched. Develop is a branch of integration with features, it is created from main, and all the next features are merged into it.

A feature branch is created from the last develop, and when it is finished, it is merged back into the develop and deleted. Feature branches never interact directly with the main.

When develop branch is ready to go for approval, a release branch is created from it. In the release branch created, bug fixes, documentation, improvements, any requests in tests performed by QA are carried out. After finalized and tested, it is merged with main and develop, creating a new version tag on main and then deleted.

The hotfix branch is for solving errors occurred in production, it is created directly from the main, as soon as it is solved, it is merged into main and develop (or release if it is still active). Also adding a new version tag to main.

The general git-flow follows below: 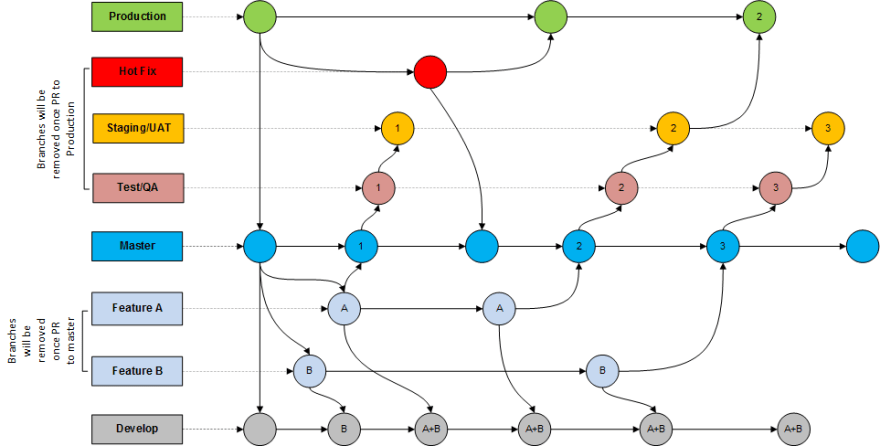 How was implementing in the company?

There was a need for more branches organization in the company. There were multiple branches that had no meaning, already was merged, but was still there. Many developers worked on the project and started to create branch as a big branch stair, one over another, of course, that leads to conflicts, which was not good, but at least they were solved safely.

So I call my team and started talking about a way to fix these issues. I spoke about git-flow, wrote a small article, like this one here, explaining how and then we publish in company documentation guidelines repository. The team started to follow, in some small projects, and its quite working.

Your whole team must agree about the way you all discuss, to suit all your projects needs.

But other discussions come to the table, automation, git-flow was a big start, the next step we gonna work on CD/CI in some repositories processes.

This article was originaly published in Dheyson Alves - Blog 📝

Once suspended, dheyson_alvess will not be able to comment or publish posts until their suspension is removed.

Once unsuspended, dheyson_alvess will be able to comment and publish posts again.

Once unpublished, all posts by dheyson_alvess will become hidden and only accessible to themselves.

If dheyson_alvess is not suspended, they can still re-publish their posts from their dashboard.

Once unpublished, this post will become invisible to the public and only accessible to Dheyson Alves.

Thanks for keeping DEV Community safe. Here is what you can do to flag dheyson_alvess:

Unflagging dheyson_alvess will restore default visibility to their posts.