In the previous article, we looked at how to transition a set of boolean flags into a simple state machine. Here we'll take it a step further with a different example, and make our states and transitions do actually useful things.

Actions on the Side 🔗

FundTheRebuild.com is a website designed to highlight GoFundMe campaigns that haven't gone viral and need a bit of extra attention. The "Add a Cause" page allows people to submit their own campaigns. 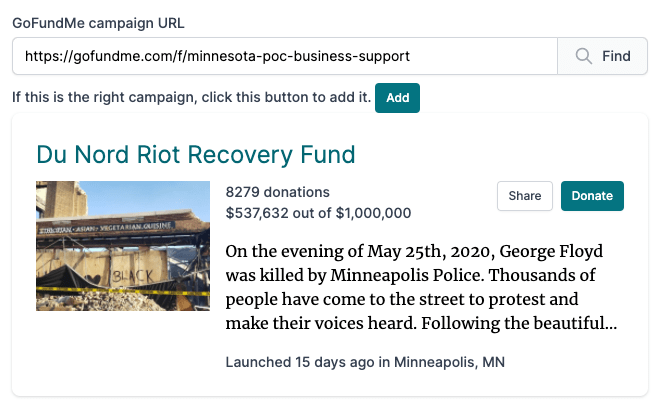 When opening the page, users see a text box where they can paste the URL of a GoFundMe campaign. Upon submitting the form, the page will try to download details about the supplied campaign. If it finds a valid GoFundMe campaign, it displays the details to the user, who can then click an "Add" button to confirm. At this point the link to the campaign is sent into a queue to be approved and added to the site.

The initial implementation of the Add page uses a basic state machine with seven states: 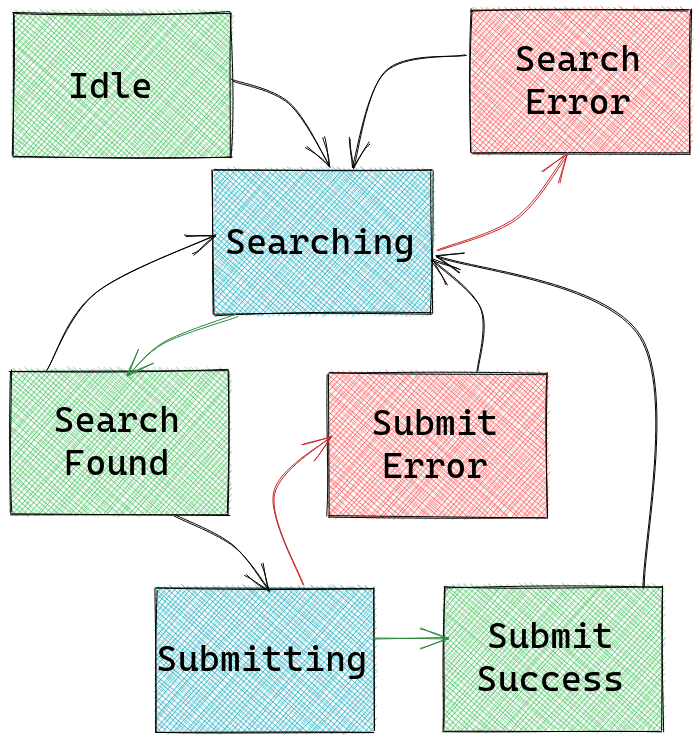 The state machine starts in the IDLE state, proceeds through the SEARCHING states, and then moves to SUBMITTING if the user confirms that they want to add the campaign. At most points in the process, clicking the Search button wll go back to the SEARCHING states again.

This mostly works fine, but it has issues. In the previous article, we established a model where we could send any event to the state machine at any time, and it would use the transition definitions to go to the correct next state (or ignore the event). But here, future alterations to the code must use these functions instead of just sending events to the state machine. Otherwise the network requests won't actually happen.

Worse, the functions send the network requests without any regard for if the state machine actually responded to the event. We could add extra code to fix that, but it duplicates the logic already in the state machine — another source for bugs.

Looking at the various places and ways that actions can happen, we end up with four types:

Synchronous actions are any "plain" Javascript code that modifies some of the variables related to the state machine (e.g. currentCampaign in the examples above), while asynchronous actions would be anything involving Promises, callbacks, setTimeout, etc.

This distinction really matters most when putting a state machine into hardware, where adding extra configurability comes with a cost. For modern programming languages, a hybrid approach that allows actions both on transitions and states works just fine. The entry and exit actions are equivalent to placing an action on all the transitions going into or out of a state, so this is a lot like a Mealy machine, but it's more convenient to write and maintain.

As an aside, one notable thing about the state definition at the top is that most of the states have a 'search': SEARCHING transition. We can alter our state machine model to include global event handlers which will run on any state that doesn't have its own handler. This further reduces duplicated logic, and leaves us with this:

In the SEARCHING and SUBMITTING states we define empty transitions for search to indicate that the global handler should not be used.

Ok, with those asides out of the way, let's get to the real task. Synchronous actions are pretty straightforward, so we'll add those first.

First, we change our event handler from just the name of the target state to an object, which can specify an action, a target state, or both. The event handlers are also moved under the on key to make space for the other actions. I've used used object keys similar to the XState library to make it easier to move from our homegrown implementation to XState should you want to in the future.

Here's a partial example just to demonstrate the syntax.

All action functions are passed the name of the event that caused the transition, and any data associated with the event. They also receive a context object, which is shared between all the action handlers and can also be accessed by outside code that works with the state machine. In this case, context would be an object containing the currentCampaign variable used above.

The stepState function is updated to handle actions as well, and we'll start to make the function reusable too:

Note that both the action and the target on a transition are optional. If we want to just alter a variable and stay in the current state, or even do nothing at all, that's fine.

Asynchronous actions take a little more care. They can succeed or fail, and other events may occur while they are running. We should handle all of these cases. (Again, syntax copied from XState.)

The action on the SEARCHING state specifies a handler and which transitions to run when the handler succeeds or fails. The onDone transition's action is called with the handler's result as its argument, while the onError handler receives whatever error was thrown.

So let's implement all this. The only function that needs to change is runTransition.

One feature of this implementation is that self-transitions are possible. If the user changes the URL and resubmits while a search is running, the state machine code will cancel the currently-running search, exit the SEARCHING state, and reenter it again. This includes running the exit and entry actions, if they exist.

At the bottom of this post on my website, you can find a Svelte REPL containing all this code and a simple mockup example.

Once suspended, dimfeld will not be able to comment or publish posts until their suspension is removed.

Once unsuspended, dimfeld will be able to comment and publish posts again.

Once unpublished, all posts by dimfeld will become hidden and only accessible to themselves.

If dimfeld is not suspended, they can still re-publish their posts from their dashboard.

Once unpublished, this post will become invisible to the public and only accessible to Daniel Imfeld.

Thanks for keeping DEV Community 👩‍💻👨‍💻 safe. Here is what you can do to flag dimfeld:

Unflagging dimfeld will restore default visibility to their posts.