Front End Engineers work a lot with forms and with the complexity of apps we need powered forms to help us managing the form state, form validation with nested levels, form verbosity.
Formik comes to solve all these problems.
Now we have a new library React Hook Form was released to compete.

React Hook Form has no dependencies

How easy is it to solve complex form constructs?

For Complex Features "Nested array" or "nested objects"
Formik handles it perfectly with validation on different events like onblur - onchange.

react-hook-form handle it but the validation of nested fields with "onblur" or "onchange" needs some works.

For simplicity, I see formik win cause it handles more stuff behind without the need to add it by yourself.

Formik support Only Controlled Component but React-hook-form support both of them.

is one that stores its own state internally, and you query the DOM using a ref to find its current value when you need it.

We want to avoid unnecessary re-render cycles as much as possible, as this could lead to major performance issues as an app grows. 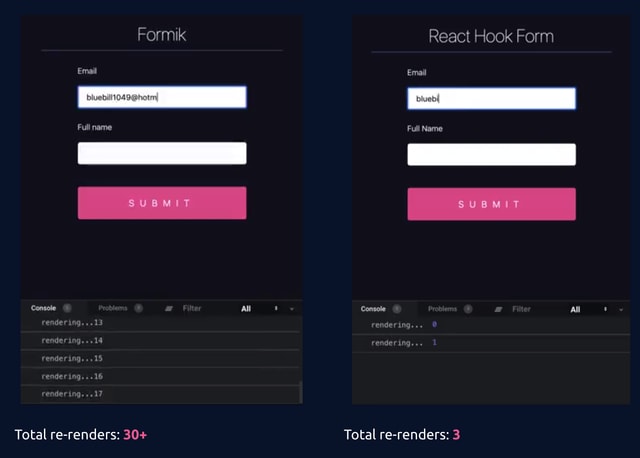 With React Hook Form watch Function help you to watch specified inputs and return their values to determine what to render.

With Formik watching all fields enabled by default so you can remove or add fields depend on values prop.

note: getValues() will not trigger re-renders or subscribe to input changes.

With Formik you can read form values with values prop.

I made a questionnaire to help less familiar devs choose the best JS framework/library to use for their web projects.