If have any things in your house: GET INSURANCE!

For those of you who missed it, I tweeted this out on Thursday:

It is with an extremely heavy heart that I must announce that The .NET Core Podcast has go on an indefinite hiatus.
I returned home from work this evening to find that my home office had flooded. I don't know how, or what the source was, yet.
But it destroyed all of my hardware.

Essentially what happened was: 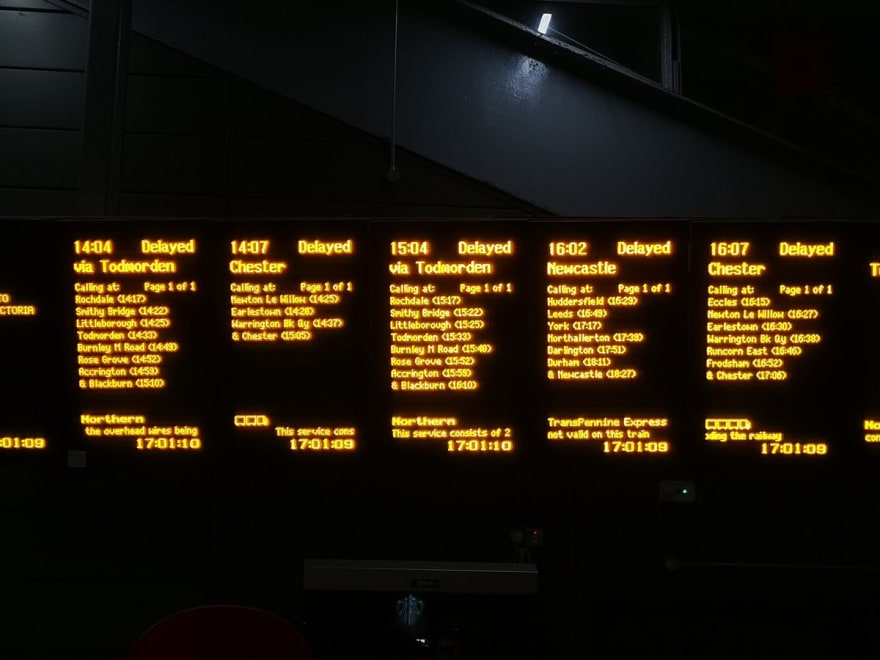 Rather than announce that any trains are cancelled (they're appearing as cancelled on third party sites and apps), they're allvlisted as delayed.
Including one which has been delayed by three hours (far left).
It's cruel to make people wait around for that long.

Also, my home office was flooded out.

Before the flooding, that room contained my:

It also contained all of the hardware that I use to record the shows, and all of my books.

Right now, it contains a marsh-land of a carpet, a dehumidifier, and a radiator which is working 24/7 to try and dry everything out.

I was able to rescue the XPS 13, and the majority of the desktop (SSDs are safe, but the spin rust drives are gone), but everything else is ruined.

As I said in the edition of the newsletter that I released shortly after the event:

First, I need to apologise for the potential sombre feel to this newsletter. Secondly, let me say that no one is injured or hurt in anyway.

There were a lot of people who were more gravely affected by the recent weather - there have been reports of people having lost their lives - and I'm eternally thankful for the fact that no one I know was harmed.

I'm also incredibly thankful that I have a multi-stage backup process. This is a process that I follow when creating episodes of the podcast:

At every step along the editing and rendering path, all data goes back through that same pathway. Meaning that, even though the majority of my drives where kaput, I still had two copies (one warm, and one cold) of all of my data.

And of course, I'm thankful that I have insurance which covers the damages. Once every thing has dried out, I will be able to have contractors in to rebuild, and I'll be able to get new hardware to replace the lost parts.

It will mean that things are a little difficult for me for the next month or so, but The Show Must Go On and it will do.

In short: GET INSURANCE!

All about The European Tech: 7 Podcasts We Listen to

Developing, More Than Writing Code: Focus on People, Not Technology

Validating before you build with Carrd

Jamie
Serial podcast creator and .NET Core maniac. Can often be found talking about everything and nothing on one of the many podcasts that he produces (only one of them is about .NET Core, honest)
6 Use Cases for Regex in Your Daily Work
#webdev #productivity #regex #programming
7 Developer Portfolio for inspiration
#webdev #motivation #career #css
+20.000 Developers Rename the Wireless Mouse to Hamster - Help Us!🐹
#discuss #challenge #productivity #jokes