Note: I tried to make this post as accessible as possible, but since I wanted to block names & Twitter handles, I had to use some images. I apologize and will update the alt tag to display the tweet's content.

I've had my fair share of weird, creepy, and downright idiotic interactions on the internet. Most of the time I try to ignore them, but I thought in good spirits I would share the "fun" I go through on the world wide web. (Yes, this is satire.)

I am not saying that these types of interactions only happen to women, yet I do believe that would a man have posted the same tweet, they would not have received the same quantity of stupid messages.

No matter what I post online, it seems that people instantly flock to find fault within my words and immediately chastise me for it.

Let's delve into my super official (lol) scientific case study on "Being A Woman On The Internet." I will be using the Scientific Method.

Another note: I will be using the word men throughout this piece because in all of my time on the internet, I have had exactly one woman post a stupid response. Is this generalizing? Yeah, maybe. But seems to me to be an outlier. I am in NO way saying that only men are capable of this behavior. I'm just saying that it happens more often than not... from... men.

How ironic would it be if I got comments by men stating that I'm making generalizations, because they clearly wouldn't have read this paragraph and the irony would be seeping through the computer screen. Again, this entire article is just a joke. Okay thx that's all.

Women on the internet typically receive more idiotic comments in response to their content. 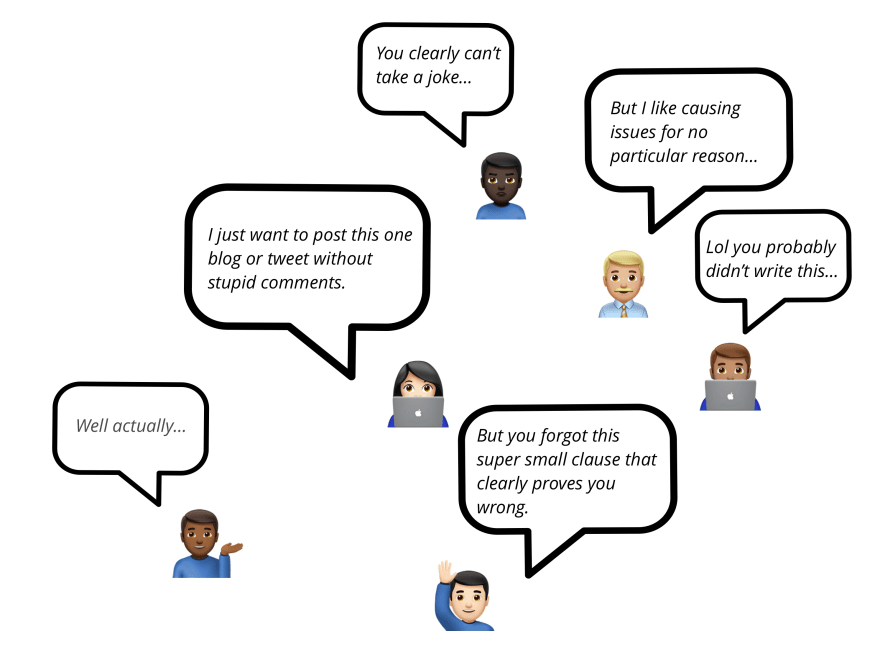 It doesn't matter what I post, I always receive a plethora of comments either trying to prove me wrong, insisting I couldn't have posted that because I'm a woman and don't understand tech, or berating me saying I'm too uptight.

Do men on the internet always look for fault within a blog post or a tweet in order to interject their personal opinions?

Men on the internet, regardless of the content posted, will look for teeny tiny holes that they can poke at until they become big gaping holes that disprove the woman's point of view. 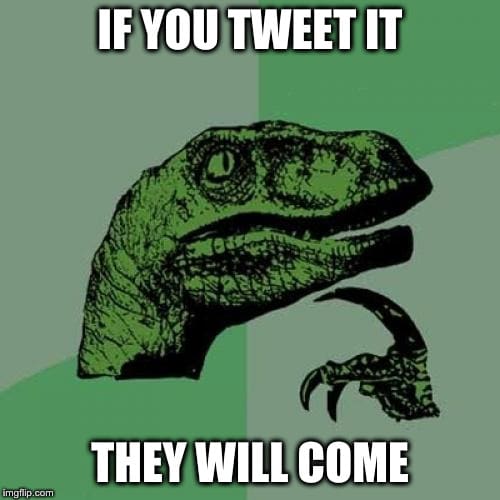 If I post a tweet claiming that I am removing social media apps from my phone, I will receive stupid comments trying to prove me wrong. 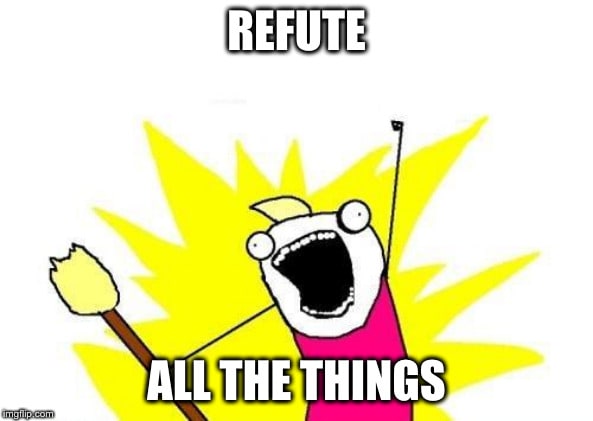 To test my super scientific hypothesis, I posted this tweet:

I just deleted all social apps, including browsers, email and Slack, off my phone. Let's see how this goes... 🙈

And then I waited for the inevitable flood of thick-witted comments to arrive. Needless to say, I was not disappointed.

I even gave the community a blaring cue that I was, in fact, using my computer. Yet some people still missed this. 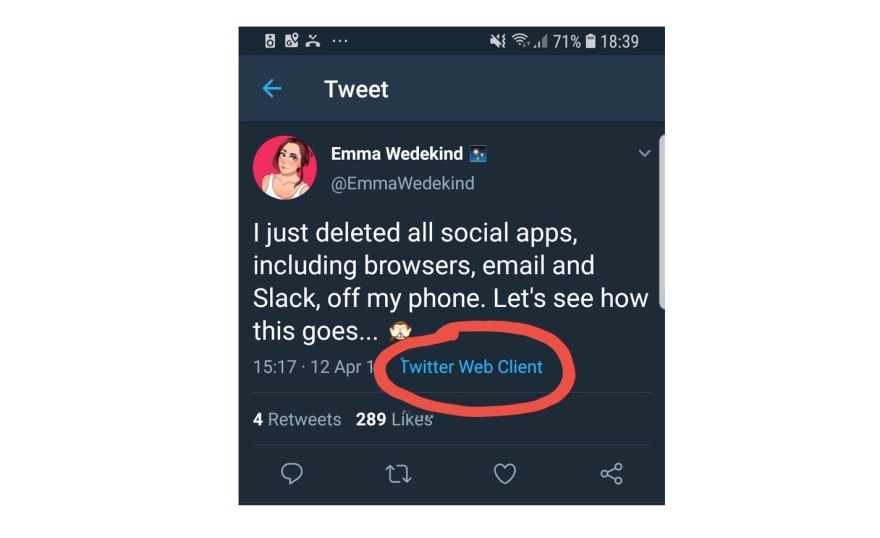 And then... they started rolling in.

They just couldn't deduce that the internet is also available through inventions we call laptops. Okay, I thought, but that's just a couple of comments.

Until they weren't just a couple comments.

Fourteen comments later and I was starting to believe that my hypothesis was undoubtedly proven true. 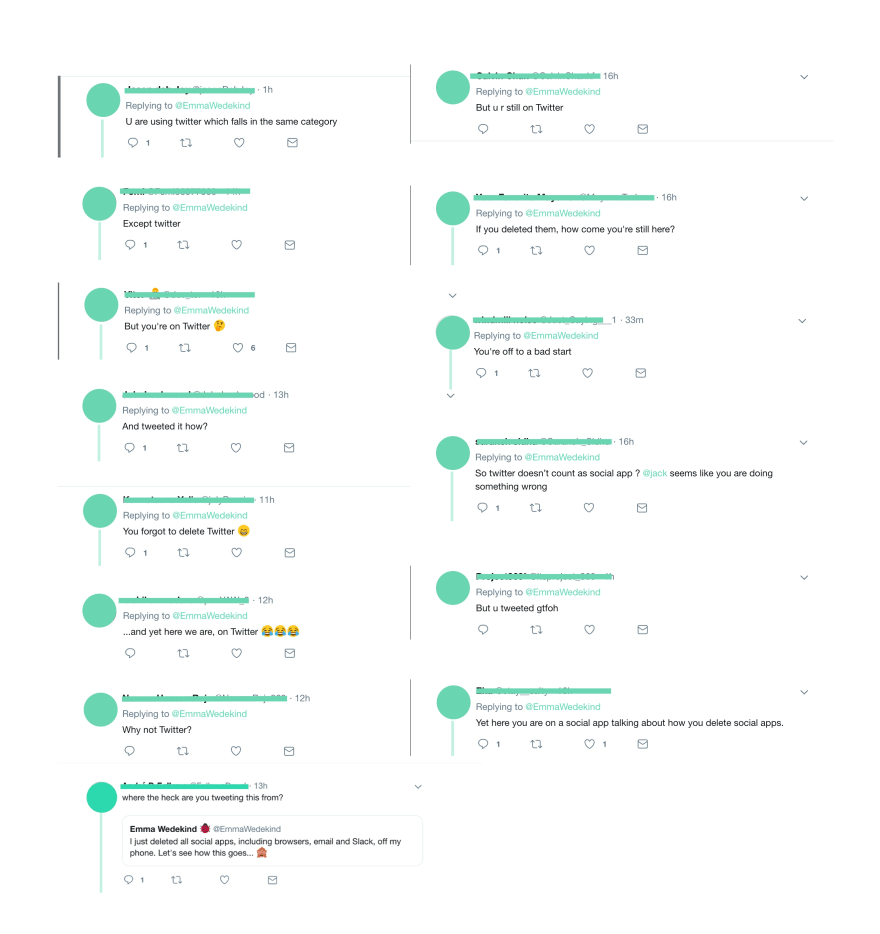 At one point, I had even posted a follow-up tweet stating that this imbecilic behavior was getting a bit ridiculous.

It's unbelievable how I tweet this and I immediately get about 10 messages of men saying "Ironic how you're posting this on social media" or "But you're still on Twitter". I said I'm removing them off my phone; doesn't mean I won't use then on my computer. Smh...🙄 twitter.com/EmmaWedekind/s…
Emma Wedekind 🐞 @EmmaWedekind
I just deleted all social apps, including browsers, email and Slack, off my phone. Let's see how this goes... 🙈

And yet... it didn't deter them. They were determined. I even started interacting with the offending parties; yes I know, "don't feed the trolls". I just couldn't help myself. I'm sarcastic, what can I say?

@FellowsDevel I am just going to leave this here. twitter.com/EmmaWedekind/s…
Emma Wedekind 🐞 @EmmaWedekind
It's unbelievable how I tweet this and I immediately get about 10 messages of men saying "Ironic how you're posting this on social media" or "But you're still on Twitter". I said I'm removing them off my phone; doesn't mean I won't use then on my computer. Smh...🙄 https://t.co/pOgQGBYQfV

@Just_Saying___1 Or, you know, you could maybe um, read the thread where 1,000 other people like yourself failed to read the word "phone."? There is internet connected to a thing called a laptop.

If you're wondering the breakdown between how many men posted responses versus women, here is my extremely legitimate quantitative data. 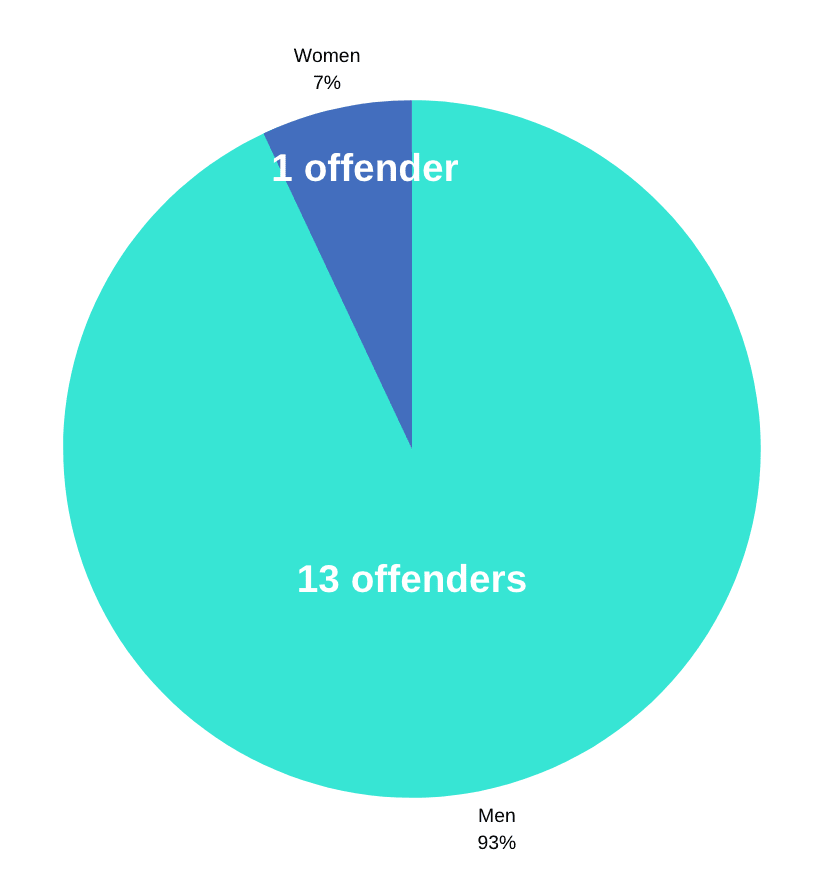 In my opinion, my hypothesis was proved truthful.

I posted this blog as a joke, because what else is there to do in these situations but get a good laugh out of it? There's no point in getting upset; it's not worth my time.

But the sad reality is that many women have this much worse than I do, and it needs to stop. If you see this type of thing happening, stand up against it. You can do so respectfully, but we must stop encouraging this incessant need to prove women wrong.

I'm not saying people can't have differing opinions, but intentionally trying to prove a woman's words as poppycock isn't cool and needs to be stopped.

Thank you for reading my satirical diary. 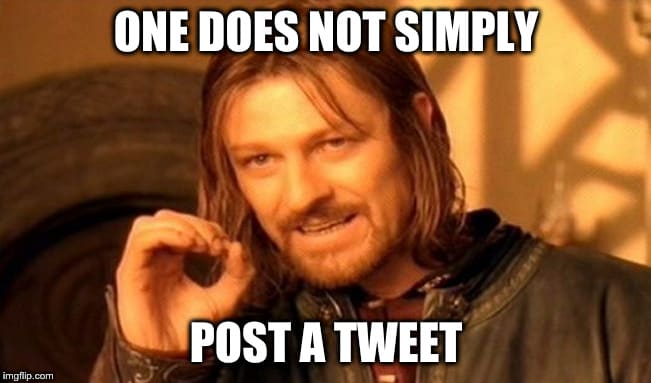 How to avoid Python dependency hell with venv and pip freeze