DEV Community is a community of 575,586 amazing developers

I have worked with Core Data long time ago and left with a bad impression about the framework. I've never used it again (started using Realm short after it).

However, it seems that something changed. I'm not sure if Core Data became much better (NSPersistenceContainer has been added after I stopped using Core Data), or if I leveled up as a developer. The thing is that I used it for a project recently and it was a pleasure to work with.

In this article, I will show you how you can start using Core Data, and how you can enjoy using it most of the time. Of course this is a brief introduction. If you want more information about how to correctly use Core Data, I would highly recommend reading Donny Wals' Practical Core Data book https://gumroad.com/l/practical-core-data . I bought it and it has been worth the money spent.

What is Core Data?

Core Data is not an ORM. Really, it is not an ORM. Core Data is a graph-based optionally persisted model framework. Core Data can take care of your model layer, it can hold your entities, so you can ask Core Data for sorted, or filtered sets of entities that you need in some point of your app execution.

Core Data can store your data in a SQLite database, or it can have your data in-memory, or even synchronized with CloudKit.

I'll give you an introduction throughout this post on how to start developing apps in SwiftUI using Core Data.

The app we'll be building will let us create many ToDo lists, complete, and delete them. Really typical.

If you prefer to just go over the code and learn it the hard way, here is the Github repo: https://github.com/fmo91/TodoListsSwiftUI

This is how it looks in code:

However, since iOS 10, we have another class that abstracts most of this complexity from us. NSPersistentContainer, which holds all these classes and exposes a viewContext property which is a NSManagedObjectContext you can use to generate NSManagedObject entities, save, delete and update them. And see how easier it is to create the stack:

All of the information I described in this section is important in order to know how the Core Data stack is structured. However, when you create a new project in Xcode, it gives you the option to start the project with Core Data. By enabling that option, Xcode will generate an NSPersistentContainer and make it visible for your app code.

So, you have created a Xcode project with Core Data, or you have initialized a new Core Data stack in an existing project. I recommend doing so in a class that holds your NSPersistentContainer, like in this example:

You'll also need a .xcdatamodeld. You can create it by creating a new Data Model in Xcode: 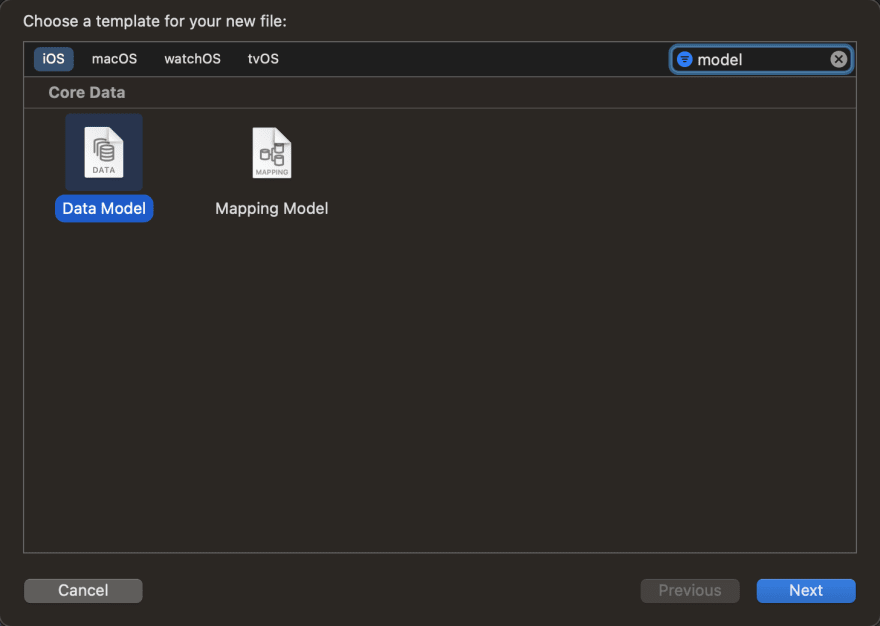 If you open the Data Model in Xcode, you'll see an editor where you can create Entities, and add and configure Attributes in your Entities and Relationships among your Entities.

In Todo, add title, creationDate and completed, as non-optional properties, as shown in the image:

In TodoList, add title and creationDate, as non-optional properties, as shown in the image:

There should be a relationship between Todo and TodoList, since a TodoList may have any number of Todo objects related to it.

Relationships may be To One or To Many. If you select a Relationship and inspect its properties in the editor:

There is also another important property you should set in the relationships. Without entering in further details, I recommend setting the Delete Rule in the todos relationship as Cascade. By doing so, you ensure whenever you delete a list, all its todos entities will also be deleted.

The default Codegen setting is Class Definition, which means that Xcode will generate classes for all these entities whenever the project is built. You don't have to manually create anything.

So far, so good. We have initialized the Stack in a class named PersistenceProvider, with the most useful class in it, the NSManagedObjectContext being hold by the NSPersistentContainer.

The NSManagedObjectContext can be used for all the operations we need to do from the app that would impact in the persistent stores.

For all the operations you do in Core Data, I recommend creating classes that will take care of them. In this example app, I created extensions for our PersistenceProvider helper class, with methods to create, read, update or delete entities.

To create a new entity, you just instantiate the object for that entity sending the context to its constructor and then save the context. As simple as it sounds:

To create a Todo for this TodoList, it is as simple as this:

The only maybe weird part is the addToTodos method that we call on list. This is also generated by Xcode. It adds the Todo to the relationship.

NSFetchRequest is a class that represents a query. Fetch requests can be created using a static method in the NSManagedObject subclasses, and can include a predicate, which is an object that describes conditions on the query, and sort descriptors, to define the order in which the results will be returned (otherwise, they will be got in random order):

This is the request for getting all TodoList entities. See I'm not setting any predicate for this fetch request. Instead, I'm requesting all the TodoList that are in the store.

If I need all the Todo for a list, this is the fetch request I'd set:

This is a bit more complex, since I'm adding a predicate. The NSPredicate takes a format, for which I send a keyPath referencing the list property.

Also, we're using two NSSortDescriptor. One for the completed property, and the other for the creationDate, so we know that the most recently created entity will be at the beginning of the result array.

When we use many NSSortDescriptor, they must be written in order of importance. So in this case, it will sort the results using completed, and then using creationDate.

To execute a request, you just call the method fetch in the managed object context:

Updating an entity in CoreData is as simple as setting new values to its properties and then saving the context:

For deleting an entity you call the method delete in the context and then save the context:

Adding the context to the environment in SwiftUI

In order to make the NSManagedObjectContext available from all the application, you need to inject it in the initial view for your app using the environment modifier, injecting the context for the \.managedObjectContext key, like this:

Let's see the full example of the list of Todo:

In this example, whenever the allLists property changes, the body will be recalculated.

Note: TextInputView is just a helper component, it doesn't do anything related to Core Data itself. Here is the code:

Now, imagine if you had to do some query depending on a parameter you send to the View using its init method. The @FetchRequest property wrapper won't be useful in that case. We can create a FetchRequest object using its init. This is the full implementation for TodoListDetailView:

The FetchRequest class has a wrappedValue property with the query result.

Note: TodoListView is just a helper component, it doesn't do anything related to Core Data itself. Here is the code:

So, that's it! Download the code (or copy it from this article), and you can compile it and see the actual app running.

If you'd like to unit test your Core Data implementation, you'll need to do some changes in our PersistenceProvider.

First, we want to test each test independently, and start from a clean state for each test case, so we'll create an enum for each case: inMemory and persisted. The PersistenceProvider will be initialized with a case of that enum, defaulting to persisted. We'll also share the same NSManagedObjectModel for all the tests, since that will be much more efficient, and finally point the database location to /dev/null so it won't save anything in disk:

After having done this, we can start testing our implementation in our unit tests target:

That's finally it. I covered all the basic steps you need to keep in mind while starting a new project using Core Data in SwiftUI. Of course there are a thousand of things you'll learn after it. Migrations, for example.

I highly recommend reading Donny Wals' Practical Core Data book. It's worth reading it if you'll use Core Data in a project.