Let’s look at a few examples of functions. Just glance at this list and see if you can determine from the name what the functions actually do. 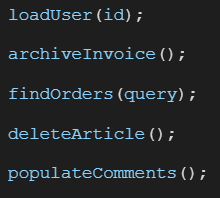 Those functions are fairly straightforward. They give us a description that we can interpret and make some pretty reasonable assumptions about what they do.

Now let’s imagine an implementation of one of these. We’ll use loadUser:

Now look closely at this function. There’s something fishy going on. Let’s break it down. First, it sets user data. Exactly what a loadUser function should do. Then it sets a loaded status of some kind on the user. Ok, we just loaded our user, so that makes sense as well. But THEN it empties out the cart. That’s our problem.

When we just look at the function name loadUser, and if we saw it being called somewhere, knowing that it empties out the shopping cart is not in any way communicated. Sure, where it’s called, it may be completely reasonable that we empty out the cart because in that call we are loading a new user. But the function doesn’t communicate that. That opens us up to some insidious problems.

What if we later on call loadUser to refresh the user data from the server? Or for some other reason, but we DON’T want the cart to be emptied when we do. Since we don’t know it’s doing that, we won’t know that we caused this problem possibly until it shows up in production with users complaining that every so often their cart just gets emptied out.

THAT is a side effect. In OO programming, side effects are when a function does something it doesn’t communicate, something that might not be anticipated. Those are side effects.

Good functions don’t have side effects, whether you’re doing OO or functional. Good functions communicate what they do so that you don’t have to dig in and read them to know what’s going on. Cognitive load is one of the biggest hurdles to programmer productivity. This practice helps keep that in check.

So keep your eyes out for this code smell, and fix it where you find it.

Unleashing the Power of ReactJS for Chrome Extension Development

Once suspended, gothinkster will not be able to comment or publish posts until their suspension is removed.

Once unsuspended, gothinkster will be able to comment and publish posts again.

Once unpublished, all posts by gothinkster will become hidden and only accessible to themselves.

If gothinkster is not suspended, they can still re-publish their posts from their dashboard.

Once unpublished, this post will become invisible to the public and only accessible to Thinkster.

Thanks for keeping DEV Community 👩‍💻👨‍💻 safe. Here is what you can do to flag gothinkster:

Unflagging gothinkster will restore default visibility to their posts.