Linear data structures is one of the most used DSs in programming it has many different Data structures like arrays linked-lists stack …etc , in this article we will talk about this tow DS arrays and Linked-list ,they are so important and basically every programmer should know about this tow even if he’s is just starting his career he will find arrays and linked lists in the first topic that he will learn due to there importance as a way of storing and manipulating data in a lot of problems.

a static Array is a static data structures that allow you to store any type of data as long as the length of the array is specified at the creation of it, this length can’t be changes since it’s a static DS . Each value in an array has an index that refers to it and gives the programmer a way to access it’s value knowing that the indexes start from 0 to n as an example: the first element of an array of integers will be : integerTable0, the type of data stored in the array in most languages has to be the same type for all values. (ex: all integers or all string , not a few of integers and some other data types).

when you should use static arrays ?

a dynamic array is an array that has no limit to the number of value that you can put in and has the same operation that you can apply to a normal static array.

when you should use dynamic arrays ?

basically when you don’t know how much data you need to store.

How you can implement a dynamic array ? 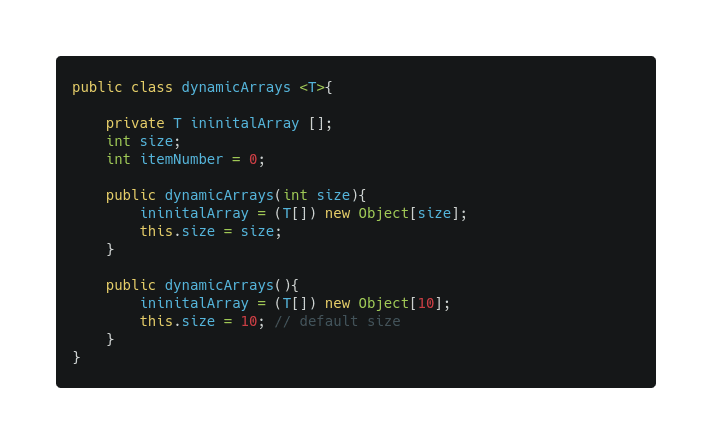 The code source for the dynamic array is in this file :
https://github.com/GourineAyoubPrf/ArrayAndLinkedLists/tree/main/src/arraysandlinkedlistes

one of the ways to make a dynamic arrays is to use static arrays like this :

arrays as a data structures has many operations that can be applied to. We have basic operations like :

The complexity is different from the static array to dynamic array , and also it can be different in one language to another due to the way of implementation but generally this is it :

we are talking about worst case here because there is some >search methods that can take less time if the array is >ordered (we will talk about searching and sorting methods in >another article).

How arrays are sorted in the memory ?

Arrays are stored in a contiguous space in memory as an example if you have an array of length 10 the compiler will have to find 10 successive places in the memory to store the data (places mean the pace necessary for storing one element of the specified type) , this behavior is only with arrays since it uses indexes so the memory address has to be side to side but it’s different with other DS like linked list (will discus later).

Why indexes start from 0 in arrays ?

A linked list is dynamic data structure that let you store any type of data and with no size limits since it’s dynamic , but with a new concept so that each list element or also called node has :

Not like the arrays that need to allocate a memory at the start of the creation because it has a known size that needed to be allocated , the linked list don’t need to allocate a contiguously space in the memory because each element has a pointer towards the next element of the list so it does not matter where is the place of the next element as long as it has it’s pointer it will always know where to go next until it reaches the null pointer (end of the linked list).

Where and Why we need linked-Lists ?

The code source for the Linked List implementation is in this file :
https://github.com/GourineAyoubPrf/ArrayAndLinkedLists/tree/main/src/arraysandlinkedlistes

this data structures are already implemented in most of the >languages . In our example we will use java language as a >tool to implement the linked list you can use any language >you want the concept want change just the syntax. Each >linked list has a pointer of the head and a size property >(you can add other properties if you want)and as we know >each node has a next pointer and a value. 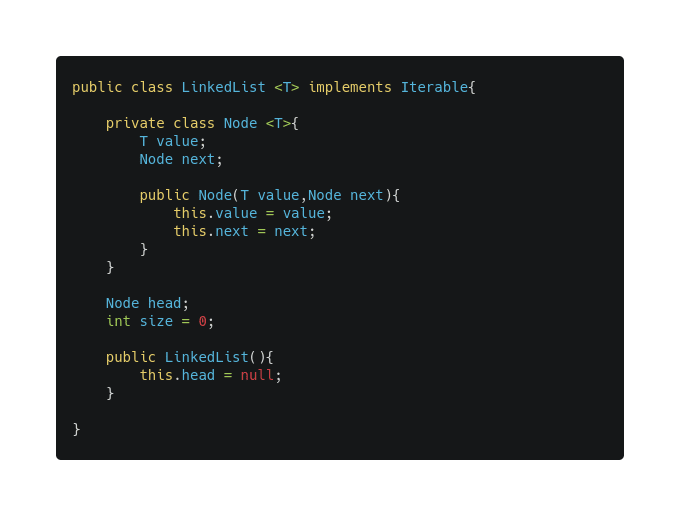 Since we already have the head pointer so this will take O(1) time complexity because we need just to change the pointer of the head to the new node and link the new node with the previous head.

you can make this also o(1) if you memorize the tail address >in your implementation. 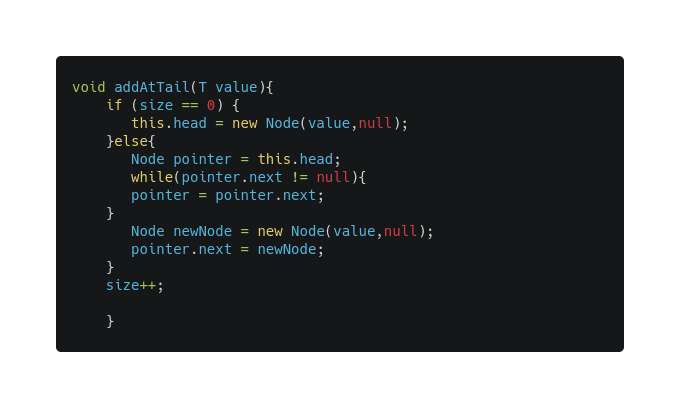 Add at a specified Index :

First we have to find the node that correspond to that index and for that we need to loop until we reach that node after that it’s just a matter of changing pointers the new node next pointer will point to the current node next and the current node next pointer will point to the new node and . And generally it will take O(n+1/2) time complexity so we can say it’s O(n). 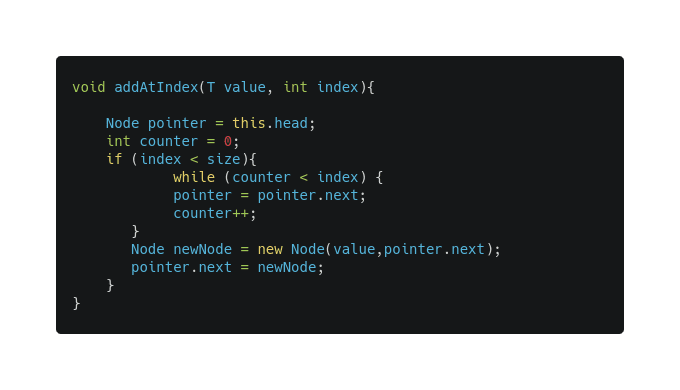 Since we have a head pointer this will be a O(1) time complexity and all what we need to do is :

in our case in java there is something called the garbage >collector so as long as an object has no reference to it it >will be cleared but in some other language you have to free >the space manually. 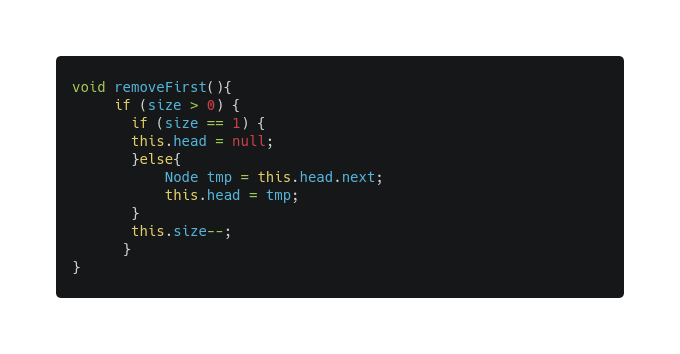 Just as adding at the tail we need first to find the node that is before tile with a loop then we do the next :

Remove at a specified index :

For this we have to loop over the list nodes so we can get the node that we are deleting after that we can do :

Search for a value:

It’s simple just a loop over using a pointer and if we reach the null pointer it means that the element was not found in the list , complexity will be O(n). 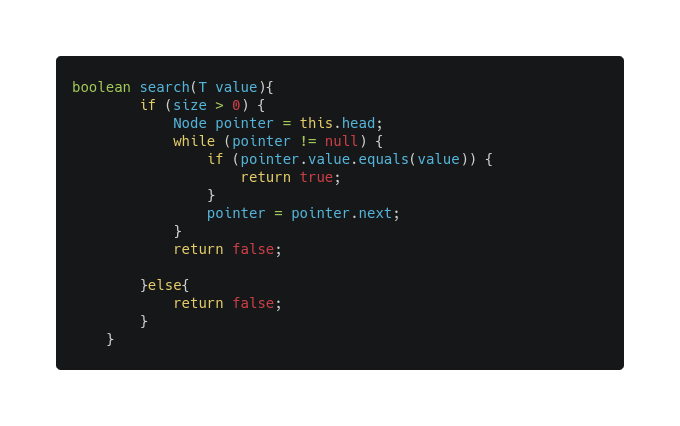 the head before pointer and the tail next pointer will be >null as indicator of the start and the end of the list.

How can i implement a double-linked-list ?

Each double linked list has a pointer at the head and the tail of the list and a size proprieties . Each node has tow pointer before and next and a value.

the implementation can be changed as you want as long as you >keep the same concept because at the end this data structure >is meant to help you not make it more complicated so you can >always tweak the implementation to solve the problem that >you want or add new operations for the list as you need.

The code source for the Double linked lists implementation is in this file :
https://github.com/GourineAyoubPrf/ArrayAndLinkedLists/tree/main/src/arraysandlinkedlistes

The same it’s will stay o(1) and doing the flowing steps :

This will be O(1) following the next steps , since we have a tail pointer we just need to do :

Add at a specified index :

Just as single linked list we need to loop over the list to fond the element with that node , the time complexity will be O(n) and the steps will be the following :

This will take O(1) time complexity with this steps :

remove at a specified index :

the search operation is the same it will take O(n) time >complexity and the we use the same principal in searching >just a pointer that will loop until we reach the end.

in this way the list will be circular in a way that you will loop over the list nodes as long as you want with no stop unless you store the head address or the tail address and check for them in order to stop.

this article is also available in the medium website you can >visit this link :

GourineAyoubPrf
Software engineer , love to learn and share what i have learned , hope that i can benefit some one with what i write and at least do a little thing to the developers community.
Data Structures and Complexity Part 3: linear Data Structures Stacks and Queues.
#computerscience #beginners #algorithms #datastructures
Data structure and complexity a programmer best tow weapons (part 1 : introduction)
#algorithms #beginners #datastructures #complexity

Once suspended, gourineayoubprf will not be able to comment or publish posts until their suspension is removed.

Once unsuspended, gourineayoubprf will be able to comment and publish posts again.

Once unpublished, all posts by gourineayoubprf will become hidden and only accessible to themselves.

If gourineayoubprf is not suspended, they can still re-publish their posts from their dashboard.

Once unpublished, this post will become invisible to the public and only accessible to GourineAyoubPrf.

Thanks for keeping DEV Community 👩‍💻👨‍💻 safe. Here is what you can do to flag gourineayoubprf:

Unflagging gourineayoubprf will restore default visibility to their posts.