Habbo is a 20-year-old online pixel chatting game considered one of the ''most popular virtual worlds for teens''. It is owned by Sulake, a Finnish video game company who also owns Hotel Hideaway (a 3D virtual world), and whose parent is the giant Dutch media- and technology company, Azerion.

Recently, it started to be referenced to as "The social world-building game", which was positively praised by community members.

Glad @Habbo is finally getting its tag line in order “The social world-building game” @WeAreAzerion. Can we finally drop “hangout for teens” and a “strange place for awesome people”

In the game’s primordial times and not even so long ago, users could enjoy and make use of different public spaces to chat and play. These were famous meeting points for thousands of players.

Public spaces were characterised by having unique furniture different from the one available on the catalogue to be acquired by users. For instance, discotheques or snack bars would have their own type of chairs, benches or parasols. 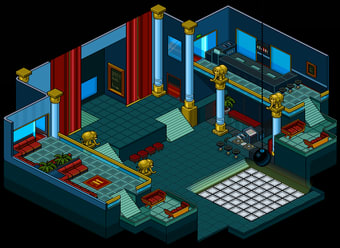 But liberty to build and re-imagine Habbo was given when the furniture of these spaces was released in the form of packs. 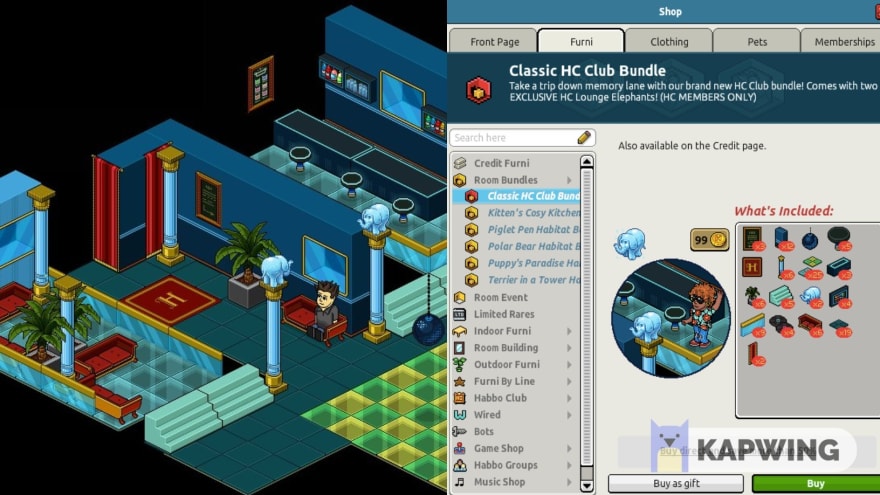 These packs would allow Habbos to personally experience those spaces, rebuild or integrate them with their own style of building and decoration of a room. Nevertheless, it is worth notice that not all spaces were made available, and it is still possible to perceive a difference between public and private rooms; which in the context of a hotel, makes sense (public areas vs private rooms).

Additionally, personalised packs have been created to promote a closer relationship with the community and expand game creation. A great example of social listening was the Artist Studio Bundle. 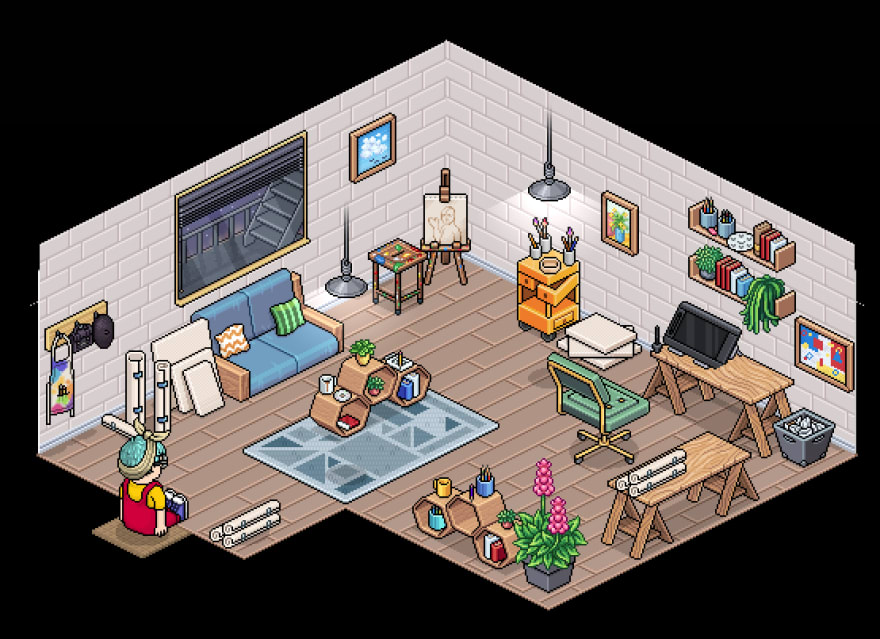 Which was a great success. 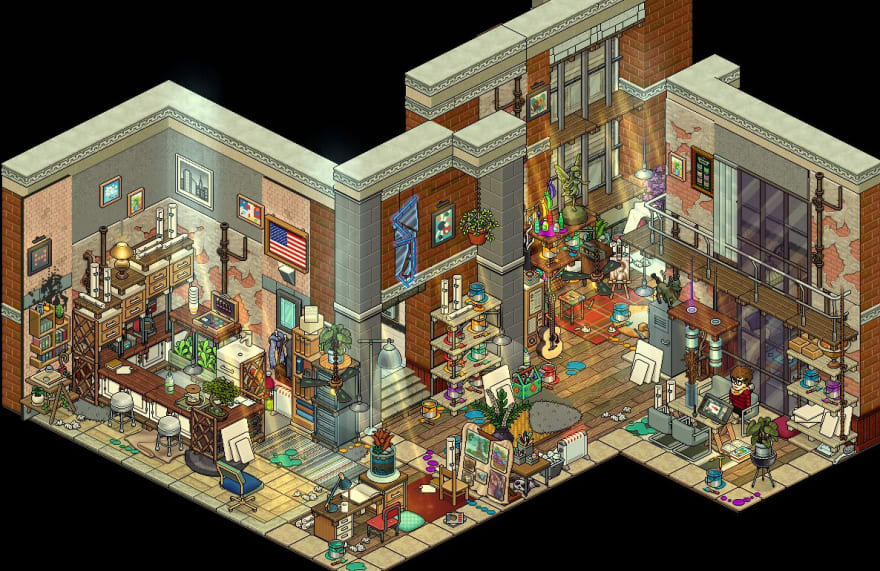 Today something else! A modern artist studio. I love the artist furni so much. Built at @Habbo .com!

And led to a myriad of re-creations shared across Twitter using the # HabboStudio for a global competition.

Although Habbo's mainly known as a social network, it has now been captivating a broader audience by providing a myriad of tools for emerging builders and artists.

But, why are world-building games so attractive?

The cited interview is seen from a creator perspective, but the same can be applied to users who build and therefore contribute to a game made of mini world-buildings.

"In the world of game design, the goal of worldbuilding is to create a context for the game, or what we often call the “narrative wrapper”. By looking from the perspective each Habbo player creates its own world, it will also need its own context. This will motivate and engage players with their characters.

In a "Real-time Social Gaming With Habbo Hotel" talk, the old creative Sulake's CEO Paul LaFontaine, curiously spoke about the importance of giving users the freedom to create. Back in 2011, he was already making emphasis on players' faster expectations, the impact of trading on creativity and virtual economies and how to maximise a synchronous gaming experience.

Paul mentions that after 4 hours of the horse being introduced in Habbo- a pet mechanic that you buy the horse, feed the horse and keep him, and where the difference relies on being able to ride it turning the horse into a wearable and a status symbol-, a horse race was built by a user. A fast-build.

By giving power to its users, Habbo unlocks a pool of talent of more than a million ideas coming to fruition after the release of a mechanic. Consequently, the game has to embrace the amount of energy unleased by the mind of its users rather than outrace it. The same example can most popularly be seen after the release of Banzai and Freeze, which ended up replacing the old pre-made games.

Instead of players only playing the game, they can now create, have an audience, share with their friends and create new environments for the community!

Habbo DIY (Do It Yourself), became relevant both on Twitter and YouTube after many users started to share their creations with different types of furniture on social media.

Who are the builders

Habbo builders are usually motivated to showcase their skills. They're building enthusiasts who enjoy testing the limits of creativity by participating in competitions or putting together huge halls for fansite ceremonies and events.

Getting back to building on @Habbo @HabboPTBR is giving me goosebumps, just love ittttt 🤩❤️
I've been missing this shit alot 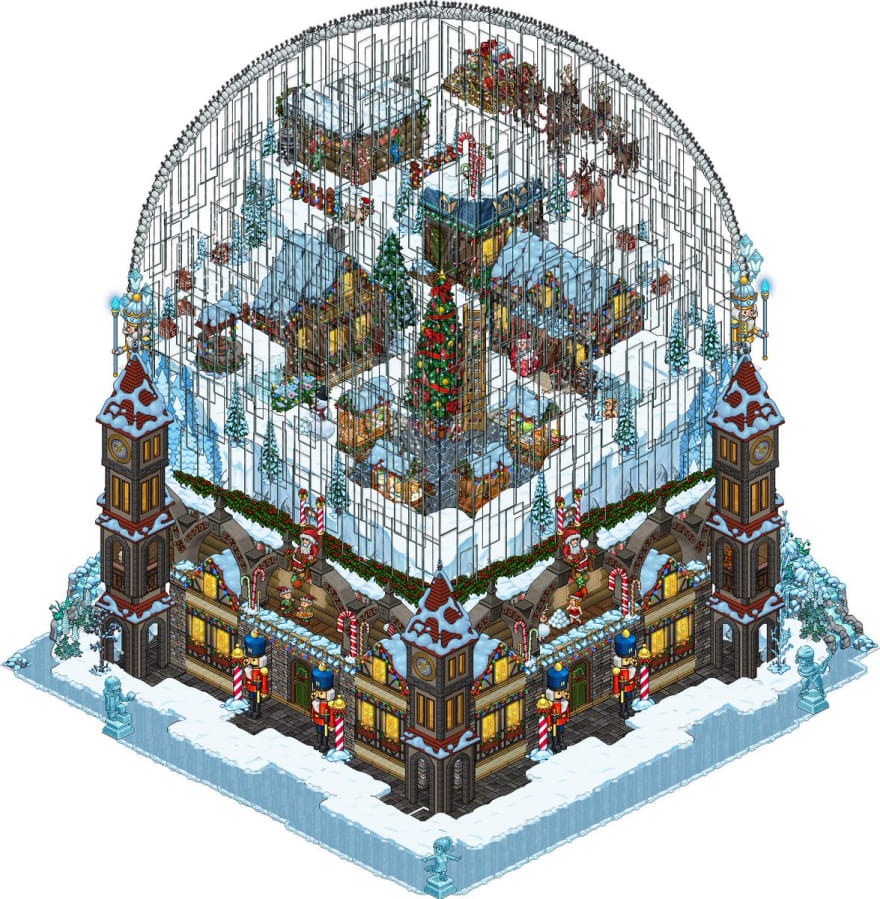 For coding enthusiasts, the love for furniture made self-taught developers find a way to fetch their Habbo names, codes and ID's.

For listing purposes as well as integration into fansites, there are different resources available to explore.

All images were taken from Google and edited on Kapwing for demonstration purposes.

Thanks for reading this far!
Article available in Brazilian/Portuguese at HabboColor. [soon]

I'm Confused what can i do about learn web dev?

How To Prepare For The Coding Interview? Tips For Freshers!