“GüebZine” was a webzine which I started in 1998 (third and last official issue was released in 1999), creating it with HTML and a little bit of JavaScript. It was hosted on EmuM@nia (emumania.com) which was one of the most famous Spanish emulation web sites before it disappeared in 2002. It had different contributors (DaTaR, Erterks, ARROW, [Lolo], CHIP, Scumnok, [[[ALX]]]…) who wrote some sections and/or helped in some way. 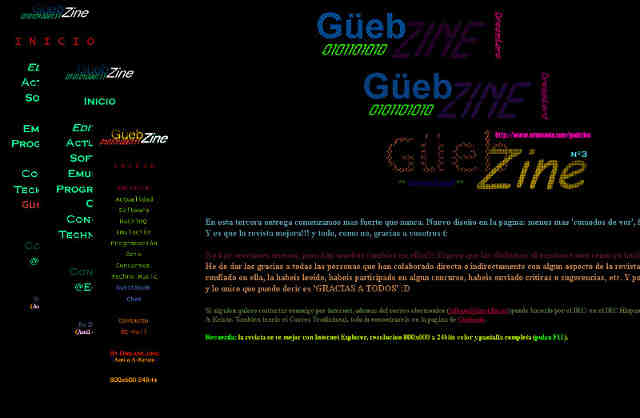 Only three issues where released (all using Spanish as the main language). The fourth issue, which I was doing until 2000 or 2001 (I cannot remember), was never neither finished nor released but the last version I could found is included in this repository.

This repository also contains installers and launchers (one of them was made by CHIP) and different versions of the official website where people could download this webzine.

The repository can be found on GitHub: https://github.com/jalbam/guebzine

Articles vs Videos - Which is Your Learning Preference?

Where do I start

How To Get Response Status Code Using Apache HTTP Client?

Once suspended, jalbam will not be able to comment or publish posts until their suspension is removed.

Once unsuspended, jalbam will be able to comment and publish posts again.

Once unpublished, all posts by jalbam will become hidden and only accessible to themselves.

If jalbam is not suspended, they can still re-publish their posts from their dashboard.

Once unpublished, this post will become invisible to the public and only accessible to Joan Alba Maldonado.

Thanks for keeping DEV Community 👩‍💻👨‍💻 safe. Here is what you can do to flag jalbam:

Unflagging jalbam will restore default visibility to their posts.